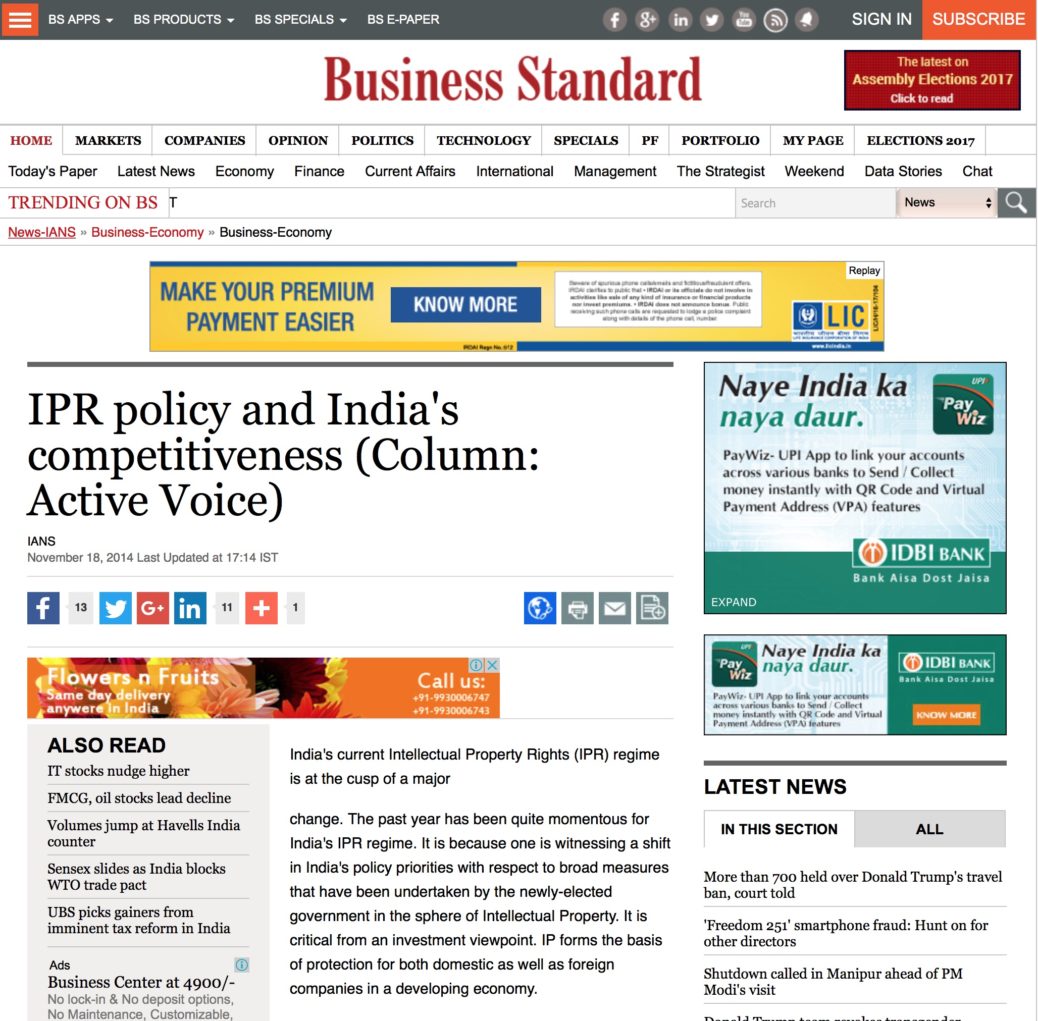 Intellectual Property Rights are important from the standpoint of maintaining present as well as ensuring future competitiveness. They also have an impact on the FDI inflows in a developing country, which helps not just in terms of capital inflows, but also in terms of technology and expertise. Strengthening IPR thus becomes imperative from the viewpoint of economic development. According to the most recent IP Index by GIPC (Global Intellectual Property Center) of the US Chamber of Commerce, India’s rank is the last among 25 countries for which the Center prepares the Index. It is alarming, and steps need to be taken to ensure we do better on various aspects covered under the specific index.

IP forms the bedrock of a knowledge-based economy. The term Intellectual Property (IP) reflects that its subject matter is a product of the mind or the intellect. IP could be in the form of Patents; Trademarks; Geographical Indications; Industrial Designs; Layout-Designs (Topographies) of Integrated Circuits; Plant Variety Protection and Copyright.

The Indian IP landscape underwent a sea change during the 1990’s when India started to liberalize. The opening up of various sectors meant that foreign companies were willing to invest but wanted protection for their technology and intellectual property. It meant that India had to formulate measures to do this.  Accordingly, India embraced the TRIPS agreement of the GATT (later renamed the World Trade Organization) in 1994.

It enabled its Intellectual Property System and companies to align themselves with global IP standards, and there is an increasing move towards harmonization of the IP regime to global standards. It has helped companies from countries abroad to have a level playing field against companies in India competing against them in a range of industries where patents are crucial to gain competitive advantage over peers.

There is an increasing trend observed in almost every aspect of the Intellectual Property in India. Basis the data for the past ten years one can observe that there is an increase in the number of filings for most types of Intellectual property. It shows the deepening of the IPR regime in the country.

A very recent step aimed at improving Indian IP standards in this direction is the IPR policy that is currently being envisaged by the Department of Commerce, Government of India. The Department of Industrial Policy & Promotion is responsible for four of the seven IP rights namely Patents, Trade Marks, Designs and GI’s. These are administered through the Office of the Controller General of Patents, Designs and Trade Marks (CGPDTM), a subordinate office, with headquarters at Mumbai.

In our opinion, the intent to have an IPR policy is a step in the right direction and in continuation with the national IP strategy that was announced a few months back. It will help both in reducing the fear in foreign countries that are apprehensive about investing in India as well as strengthen the current IP regime even further.

There are two aspects to IPR in India. One aspect is the strengthening of the IPR policy regime the other pertains to the implementation of the laws pertaining to IPR by companies. If one looks at the example of the pharmaceutical industry one can gain insights as to how the law and its relation to the way the industry functions. The pharmaceutical industry’s evolution is a case in point. It is distinctly related to The Patents Act 1970 which allowed the pharmaceutical companies process patents. These were patents that allowed the process to be patented rather than the product. So a company finding a new method for creation of the same Active Pharmaceutical Ingredient (The pharmaceutical drug which is the core of the medicine) was granted a process patent. This over time saw a proliferation of generic companies in India that saw foreign patents and went in for process patents of their foreign companies counterparts.

As India became a signatory to the TRIPS agreement and accordingly introduced the Patent Amendment Act of 2005, process patents were out, and product patents began to be granted. Increasingly foreign companies entered India through a joint venture route and have begun funding research for strengthening not just the Indian patent regime, but also providing societal benefit. A question very often associated with pharmaceutical research is that doesn’t it leave the poor of the society outside the ambit of affordable healthcare? Also, doesn’t patenting allow exclusive monopoly rights over the next two decades to one producer? The answer to the first question appears to be in the negative in the sense that patenting does help the poor if not immediately in the long term it does offer them a chance of the medicine. If patenting is not there the incentive to produce any drug is miniscule. Also, newer methods of financing the investment could help address the problem of recovering costs and undertaking research. Similarly, the exclusive monopoly is meant not for reducing competition but for helping pharma companies recover the investment upfront both in terms of time and research work for producing a new chemical, which solves some human ailment.

Thus, from our viewpoint patenting or any other form of IPR protection helps create a level playing field and does lead to societal benefits now or in the future. The question should not be if patenting or for that matter any IPR is useful but rather how stringent should be the regime for a developing country like India at this juncture.

Published with Business Standard on November 18, 2014.