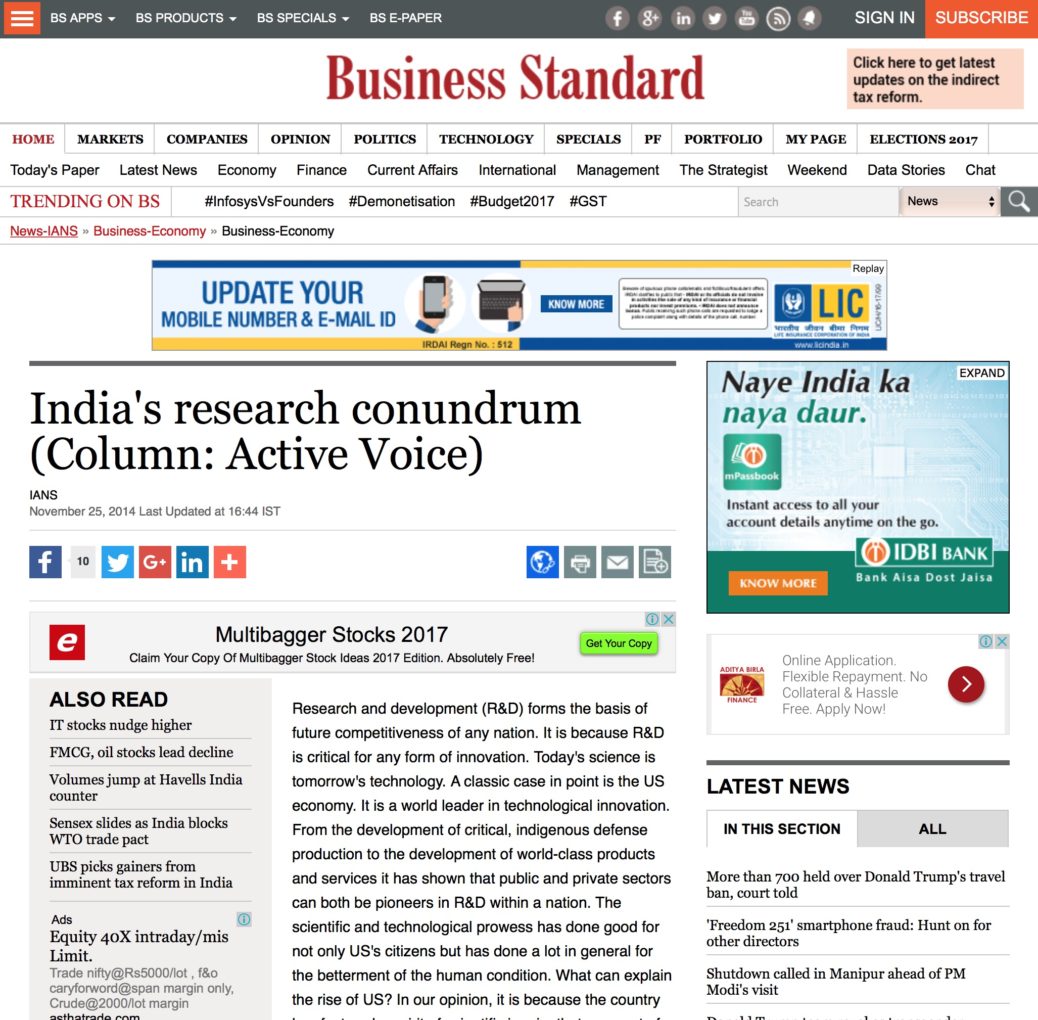 Research and development (R&D) forms the basis of future competitiveness of any nation. It is because R&D is critical for any form of innovation. Today’s science is tomorrow’s technology. A classic case in point is the US economy. It is a world leader in technological innovation. From the development of critical, indigenous defense production to the development of world-class products and services it has shown that public and private sectors can both be pioneers in R&D within a nation. The scientific and technological prowess has done good for not only US’s citizens but has done a lot in general for the betterment of the human condition. What can explain the rise of US? In our opinion, it is because the country has fostered a spirit of scientific inquiry that was part of its founding father’s legacy. Part of this started with having had a targeted approach in fostering science and technology within its policy context. Part of it has also to do with developing economic centers of activity (think Silicon Valley) based on its science and technology ecosystem. Also, it has had a specific focus on institutions that have enabled its stupendous economic growth post the Second World War.

In India, since Independence the focus has been on fostering science and technology but this has essentially not culminated into India realizing its true potential barring specific instances like green revolution, etc. One can consider any form of research and one finds that India is not the research hotspot in any sphere be it fundamental research or any applied research. With notable exceptions like TIFR, CSIR and ISRO with its recent brilliant mission to Mars and several private companies, the research ecosystem broadly remains shallow at best and completely absent at worst. Even the IIT’s which were first created with the purpose of research to augment the CSIR labs have it seems forgotten their basic responsibility to do research. Their essential function has been reduced to producing a workforce of trained manpower to be hired by the industry. These engineers then go on to spend the rest of their lives either doing technical jobs or striving to get into one of the IIM’s and to work as managers in private and in some cases public concerns. Part of the research conundrum lies in the development of talent for research. It is again dependent on better perks and facilities for researchers. Most of the brilliant talent moves to greener pastures in search of a better quality of life, that research is unable to provide in India. It is not the case elsewhere. A top professor in US can draw benefits commensurate to the CEO of a multinational corporation (MNC).

In our opinion, there is a fundamental problem with respect to our mindset towards research in general and science and technology (S&T) research in particular.  So entrenched in our mindset is the bias towards S&T that when two weeks back the then Health and Family Welfare Minister was shifted to hold the portfolio of the Science and Technology and Earth Sciences Ministry, a prominent newspaper called it a ‘low-key’ ministry, another one called it a ‘far less high profile ministry’. The moot point is that even our neutral media has an opinion on what is high profile and what is low profile? One may humbly ask- how do we assess the importance of any ministry (especially the ones that are not part of Cabinet Committee on Security)? We for one disagree on this ‘relative importance of ministries’. And even if one has to compare the relative importance of ministries should it not be assessed on the kind of impact it may have on future of the nation? In our opinion, the impact of science and technology research is if not more than, then at least equivalent to that of the Health Ministry.

With low ratios on R&D as a percentage of GDP, India cannot hope to become a scientific or industrial powerhouse till the time it adequately spends on (R&D). While spending alone cannot be a measure of R&D capability now, or future competitiveness (as shown by Mangalyaan), it certainly points to the necessity for greater investments. What we require is additional funding for research. Also, we believe the present model of government or public sector funding will have to be replaced by a newer paradigm of private sector funding as India liberalizes privatizes and globalizes (LPG’s) further.  It was pointed out in the May 2013 whitepaper on the “Stimulation of Investment of Private Sector into Research and Development in India” of the Ministry of Science and Technology of the Government of India (GOI). The paper also had noted that in most developed and emerging nations of the world the ratio of public to private sector funding in research was 1:2 while in India it was the complete opposite, i.e., 2:1. While we do not think that the target set in the whitepaper of 1:1 funding (for private and public sectors) till 2017 is likely to be met we certainly believe it is time for private sector companies to introspect and ramp up their research spends.

We also believe that if India has to attain global competitiveness as envisaged in its Science, Technology and Innovation Policy (STI) 2013, and further the ‘decade of Innovation’ it will have to bring about a fundamental change in the people’s mindset. It will start with taking cognizance of research and development in the context of national interest and aligning it with the broader goal of holistic socio-economic development.

Published with Business Standard on November 25, 2014.