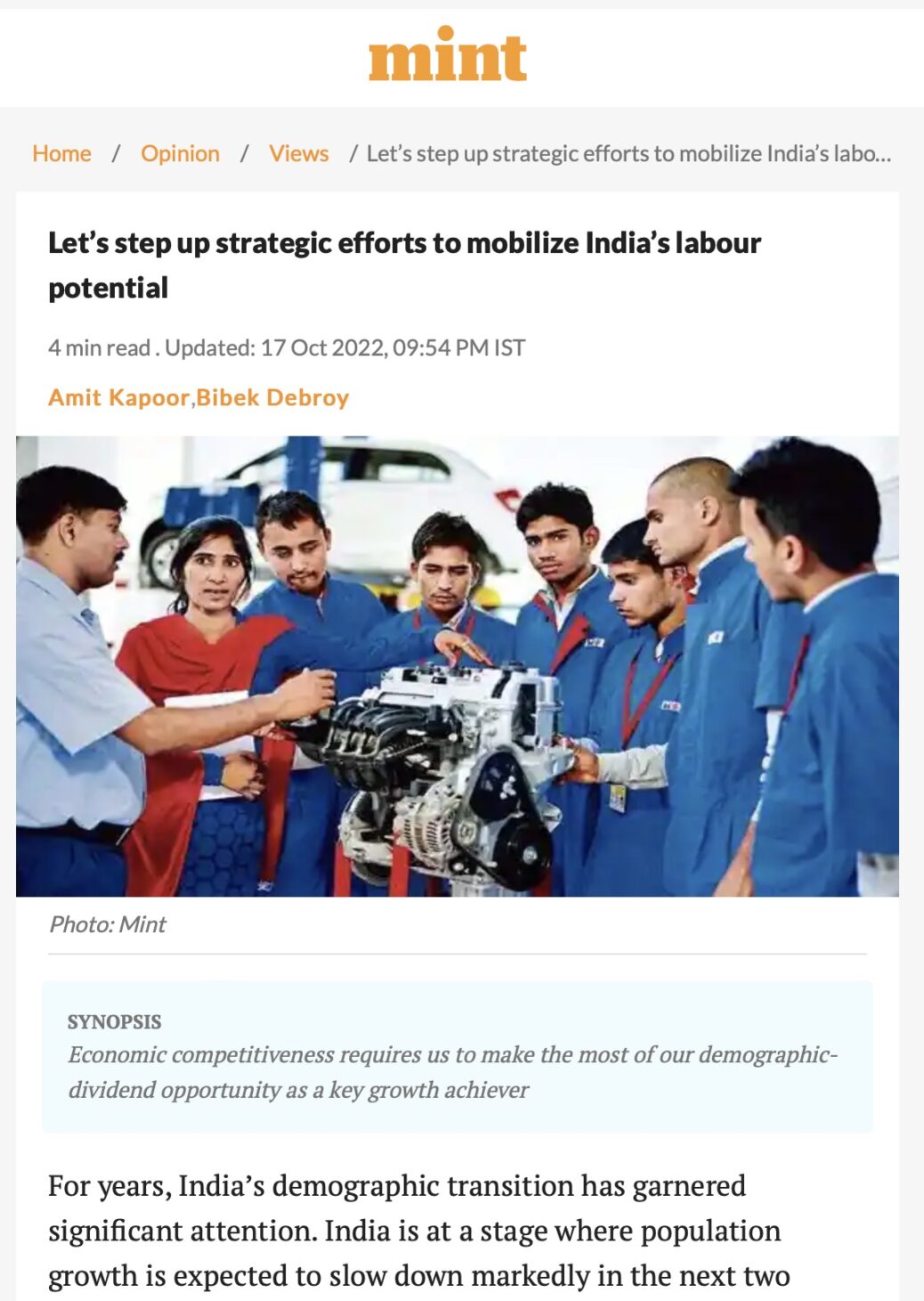 Economic competitiveness requires us to make the most of our demographic-dividend opportunity as a key growth achiever.

In today’s era of overlapping and intertwined global value chains, where any event happening in one part of the world can possibly impact any other region despite the physical distances, the success or failure of any nation is not limited to its own boundaries. In such a globalised age, India’s success will be all the more significant, not just for its own development goals but for the world at large. In this knitted global landscape, India’s success has the potential to create more than just a positive spillover effect. The nation can shape the global trends by overcoming its obstacles and achieving its ambitions. It has certain characteristics that makes its success relevant for the entire world.

India’s enormous population is often talked about in policy discussions. Abode to one-sixth of the global population, it is widely recognised that by channelling this resource’s potential, both India and the world can reap substantial benefits. By 2027, India’s working-age population is expected to grow to 18.6 per cent of the global labour force. Furthermore, India will supposedly add another 183 million people between 2020-2050 to its working age group of 15-64 years. This would generate a new source of labour force for the whole world once this reservoir of population is reformed into a useful resource equipped with education, skills and health. Moreover, this additional labour force would unleash potential demand for the industries to cater to. According to the World Economic Forum, India is expected to be led by the middle class by 2030. Households in the middle-income will be around 80 per cent in 2030 from about 50 per cent today, expected to be driving 75 per cent of consumer spending. This section of the economy, with an addition of nearly 140 million new households, would serve as a lucrative market, generating demand exponentially and driving up India’s consumption expenditure. If India succeeds in leveraging its demographic dividend, the consumption growth from this expanded middle-class will be supported by more educated and better-employed youth. Industries worldwide will have the opportunity to serve this market better and harness the young and able population.

India holds a position of significance in the world economy today. It is the sixth-largest economy and falls behind only the U.S., China, Japan, Germany and the U.K. As per IMF estimates, India accounts for 15 per cent of the global growth, notwithstanding several challenges India is currently facing, like education and healthcare related inadequacies, poverty and inequitable distribution of resources, among others. Additionally, India’s share in world GDP increased to 6.8 per cent from 4 per cent between 2000-2020 when measured at current prices (PPP). If India manages to overcome its obstacles, it has the ability to contribute to global growth in a far greater capacity. Attaining a uniform spread of prosperity across different communities, classes and regions within the country will unleash India’s true potential, not just for its own growth but for the global growth at large.

FDI inflows help to gain a competitive advantage in different sectors by facilitating the transfer of technology from investors and consolidating production. India has seen a 20-fold increase in FDI inflows in the last 20 years. It is rapidly emerging as a preferred investment destination among global investors. The country witnessed an all-time high annual FDI inflow of USD 83.57 billion in FY21-22. Concerted efforts are underway to make India an even more attractive and stable investment ground.

During COVID-19, India provided supplies of over 235 million vaccines to 98 countries. This further bolstered India’s position in the world. Going forward, India should focus on improving its manufacturing ecosystem and the scientific research. This would augment its capacity, and the country could play a more significant role on the global platform using its domestic scientific research system. Surpassing national interest showcases an ethos of solidarity with the world. As a dominant player from the Asian bloc, India can lay the foundation for other developing nations by the way it chooses to address the trade-off between its sustainability goals and the hindrances to economic growth. Today, the nation can lead the climate change discourse as it has emerged as a crucial lynchpin in an evolving geo-political landscape of a multipolar world.

India’s strategy will have far-reaching consequences in the coming decades. The nation’s ability to develop an eloquent national value proposition, identifying specific opportunities and provide a conducive business environment is critical to its long-term economic success. A nation’s economic clout depends not only on its economic prowess but on various non-economic factors as well. Social progression, sustainable production and equitable distribution of resources and value creation are some of the elements which will define India’s success. The Competitiveness paradigm broadens the very idea of success by incorporating all of the above-mentioned factors.