Cartels and collusion – will the cycle ever stop? 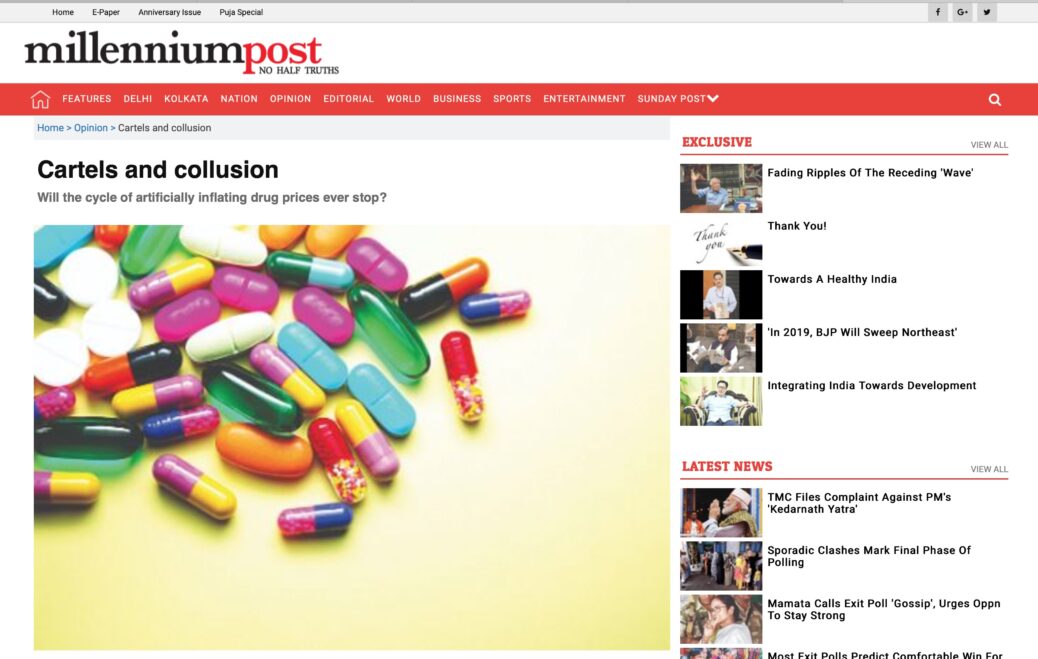 Cartels and collusion – will the cycle ever stop?

The Indian pharmaceutical industry has become almost synonymous with the US regulatory authorities.

The Indian firms that have slowly expanded their market share in the generics segment have been facing increased American scrutiny over quality issues. While that has been an ongoing process, fresh allegations have been levelled by 44 US states against 20 drug manufacturers for conspiring to artificially inflate prices of more than 100 drugs; some of them by more than 100 percent.

While Israel’s Teva Pharmaceuticals, the world’s largest producer of generics, is supposedly at the epicentre of the alleged cartel, reputed multinational like Pfizer and Sandoz have been named in the anti-trust lawsuit. Seven of India’s top pharmaceutical companies are also among the 20. The allegations are serious, and the case is being dubbed as the single biggest act of cartelisation in the US. If found guilty, this could serve a serious blow to the Indian pharmaceutical exporters, which consider the US a major market for generics.

In a market with exorbitantly high drug prices, generic drugs, which are copies of branded drugs that are no longer patented, are supposed to be the cheaper alternatives. Thus, they play a crucial role in making healthcare accessible to the people. Their importance in the US market can be realised in the fact that generics account for more than 90 percent of all prescribed drugs in the country. So, if competition is, in fact, being squeezed out through coordinated action among the drug players, it needs to be addressed urgently as the sector is critical to its consumers.

There are two reasons why the formation of a cartel on drugs is much more easily achievable than any other industry. First, the products tend to be price-insensitive, that is, their demand is hardly affected by their prices, as they are almost always a necessity for the consumers. Second, in a mature market like the US, most of the population is insured and, thus, the medical bills are picked up by insurance companies. So, consumers are mostly not affected by a rise in drug prices.

In such a market, generics are supposed to keep a check on prices as competition is intense among manufacturers and suppliers. It is often the case that the average drug prices of generic drug fall over 80 to 90 per cent from the originally patented prescription drug’s list price. Market rivalry is crucial for this to take place. Such healthy competition keeps prices low, drives innovation and expands output. However, if the generic drug manufacturers collude among themselves, as has been alleged, the consumers can face stiff prices.

And that has been the case in the past. The latest case gained steam in 2017 when two executives of Heritage Pharmaceuticals, an American company, pleaded guilty to anti-trust crimes. They confessed to rigging prices of two generic drugs – the prices of one had shot up by 8,000 per cent. If such practices are indeed taking place at the industry-level, the collusion needs to be broken and weeded out of the system.

However, it must also be noted that price hikes are not necessarily merely a result of collusion among firms. There are a few reasons why this can still take place in free markets. After a phase of intense competition when prices of generic drugs approach marginal production cost, few players tend to drop out of the market for the particular drug leaving only a few manufacturers and suppliers. This results in pricing going up again due to continued demand.

The prices can also fall if there are disruptions in the availability of intermediate chemicals that are used in the manufacturing process. Quality control issues and strategic decisions by companies to move away from less profitable generics can push prices upwards as well. Moreover, since the market is characterised by a finite number of firms, an oligopoly exists. As a result, firms respond to what a dominant firm does. If the latter raises prices, the smaller firms do not cut their prices as the dominant one can do the same and drive a few small players out of the market.

These factors need to be considered while conducting a probe that is fair. Considering the reputation of pharmaceutical firms as paragons of greed, it is quite easy for such cases to be swayed by public opinion. The case will also set a precedent for pharmaceutical companies and markets around the world. If any collusion is proven in the court of law, stringent action should be taken to prevent the likelihood of artificially inflating drug prices in the future.

The article was published with Business Standard, Outlook Indiaand Millennium Poston May 18, 2019.