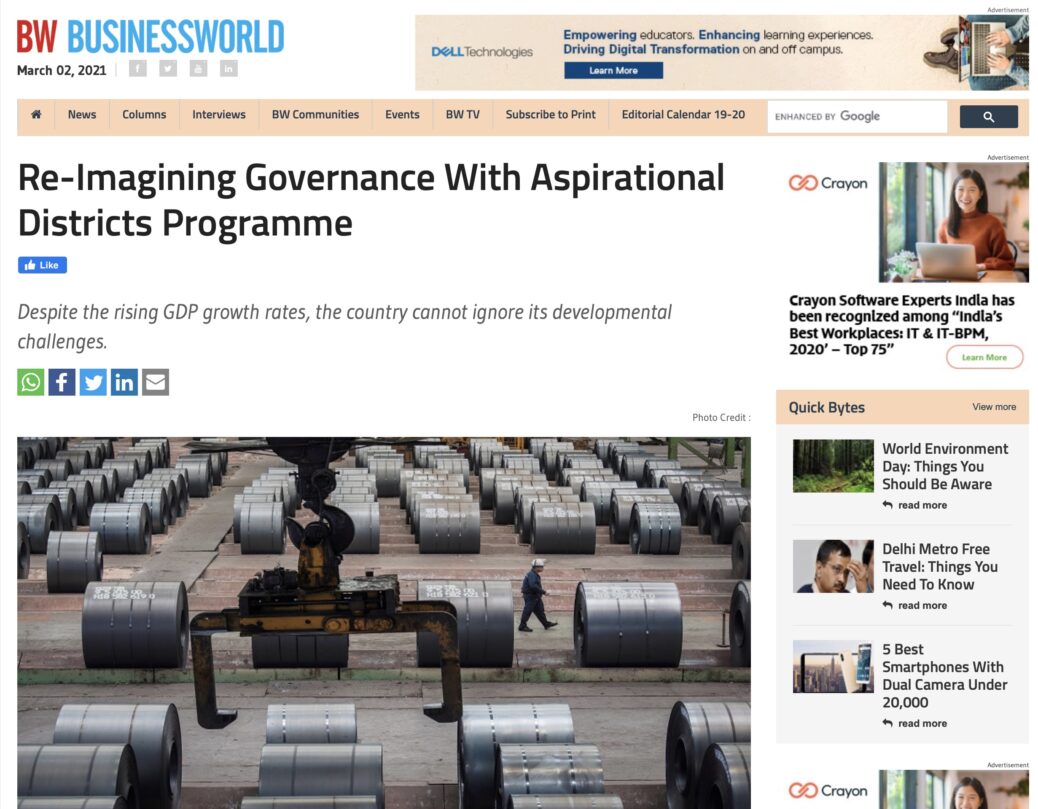 In over seven decades of its democratic journey, India has progressed by leaps and bounds, and so the needs of the people and the context for governance has also evolved. In light of these changes, governance practices cannot be constant either.

Today, India is one of the fastest-growing economies, but the economic growth does not seem to have commensurately translated into development for select geographies and sections of the population. Hence, despite the rising GDP growth rates, the country cannot ignore its developmental challenges. An initiative like the Aspirational Districts Programme (ADP) was the need of the hour when it was launched in 2018, not only because of its focus on equitable development but also its innovative governance.

Through this programme, the Centre has chosen 112 of India’s most challenging districts to transform their state of development. The ADP measures and improves human development outcomes in these districts across five broad pillars- health and nutrition, education, agriculture and water resources, financial inclusion and skill development, and basic infrastructure. The programme recognized that effecting change in such a broad range of areas could not be possible in the traditional governance framework that follows a top-down model.

Therefore, in the implementation of the programme, the powers and responsibilities are distributed across multiple stakeholders through a 3Cs approach- Convergence, Collaboration and Competition. Convergence implies a convergence between central and state policies in realising the developmental targets in these districts. It is implemented on the ground by States taking the lead in driving transformation, while NITI Aayog acts as the nodal point at the central level in facilitating interaction between the three tiers of government along with other stakeholders. As the local government bodies implement the programme at the grassroots, the Centre and State work in tandem to monitor implementation and address issues at the ground level, thus showcasing cooperative federalism and effective decentralisation.

Secondly, Collaboration implies following a collaborative approach in governance by bringing non-government organizations on board as well. Marking a departure from the conventional form of collaboration between government and non-government organizations wherein both worked within their respective domains, the ADP embeds the development partners within the institutional rubric of the government. They are involved in helping the local administration  strengthen their governance strategies and improve implementation at the grassroots.

Thirdly, Competition denotes imbibing competitiveness among the districts to accelerate progress towards achieving the common goal of development. The real-time monitoring of progress that informs the ranking of districts at frequent intervals stimulates a sense of competitiveness among them. Further, the programme maintains data transparency by keeping the dashboard displaying the progress of districts and their rankings open to the public. The real-time data also helps administrations track their districts’ progress, tailor their strategies as per the needs, draw comparisons with their peer, and help each other by sharing their best practices and strategies. Thus, there are elements of both competition and cooperation that are conjoined to create cooperative competition to fuel the process of change.

This is not all. Even the nomenclature of “aspirational” instead of “backward” used for the least developed districts covered in the programme is a testament to the programme’s intricate designing, which recognizes how language can be used as a tool to empower these districts and instil hope for change. Within two years of implementing the ADP, districts have already begun to show results, particularly in the health and education sectors. An innovative policy on paper would not have borne fruits if the governance practices followed on the grounds were not re-imagined.

The article was published with Business World on August 26, 2021.