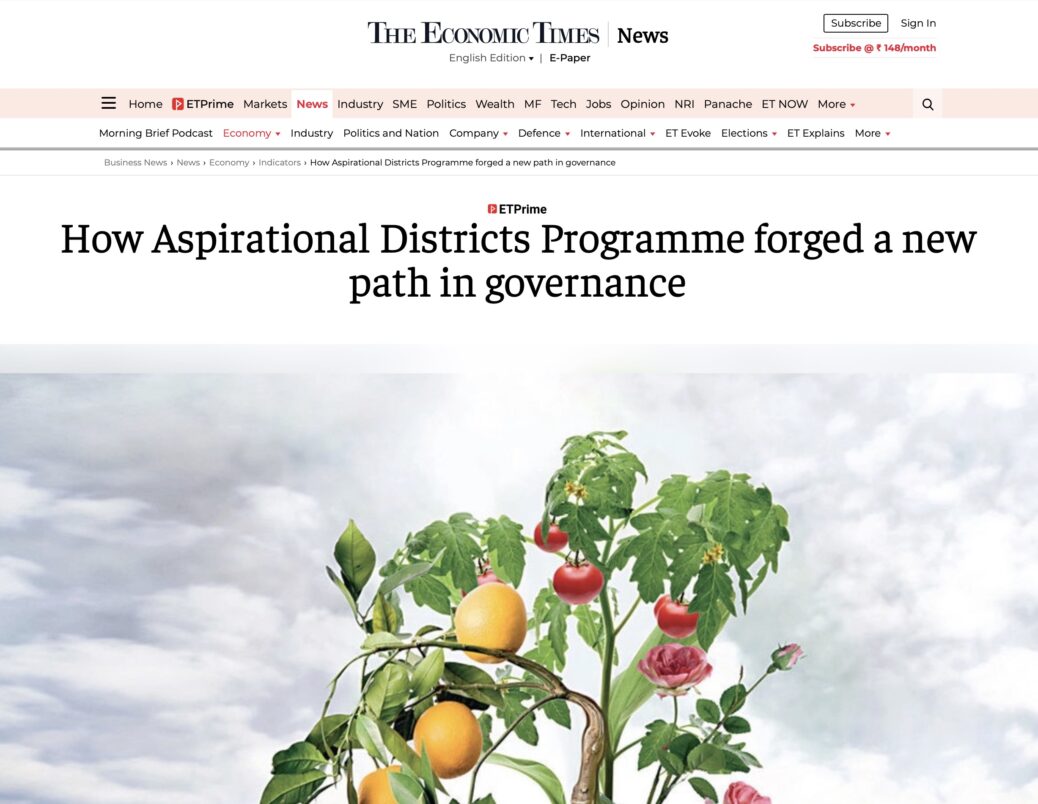 The Aspirational Districts Programme (ADP) has been changing the landscape of how India progresses, not only through its emphasis on human development over economic growth, but also in its approach to governance. Conceived as an initiative for accelerating improvement in the socio-economic indicators of the most underdeveloped districts of the country, the programme infused new life into developmental efforts from the beginning itself, when backward districts were termed instead as “aspirational”. Thereon, the programme has only taken the unconventional path.

To begin with, the nomenclature of “aspirational districts” is not just a symbolic choice but a strategic one. It recognizes that language is a powerful tool in changing people’s mindset. While “backward districts” holds a negative connotation that presents these districts as incompetent of catching up with the rest of the nation by themselves, “aspirational districts”, on the other hand, denotes hope. The term presents these districts in better light and capable of transforming themselves if given the right support. A positive terminology goes a long way in encouraging stakeholders who are involved in the developmental efforts in these districts.

A major departure from traditional forms of governance is the ADP’s 3Cs approach- Convergence, Collaboration and Competition.  Convergence implies creating convergence among State and Central Government initiatives at the district level; Cooperation denotes cooperation between the civil society and the functionaries of Central and State Governments including district teams; and Competition signifies promoting competition among the aspirational districts. The 3Cs of Convergence, Collaboration and Competition form the core principles that determine the governance mechanisms employed in the programme.

The ADP was launched in January 2018, and is currently implemented in 112 districts in 26 states and one union territory to measure and improve the human development outcomes across five broad pillars of development- health and nutrition, education, agriculture and water resources, financial inclusion and skill development, and basic infrastructure. The programme recognizes that the five pillars of development covered under this intervention encompass the whole breadth of human development, requiring collaborative efforts rather than the traditional top-down approach. Therefore, the programme promotes collaboration at all levels of government. The Centre and States converge their efforts towards transforming the districts, with the States being the main drivers of change. The States then delegate their functions down to the local government bodies.

The supervision and support of the Centre and State extended to the local institutions empowers the latter to tailor their strategies as per the needs of the districts. The state governments have also either formed a committee under their respective Chief Secretaries or appointed a nodal officer to monitor the implementation of the programme at the grassroots. At the central level, NITI Aayog anchors the initiative by facilitating convergence in polices and addressing issues raised by local administrations. Through these measures, the ADP espouses cooperative federalism, which ensures that the synergised efforts of the Centre, States and local governments leads to socio-economic progress a micro level.

The collaborative approach of the intervention also extends to integrating development organizations and civil society within the state institutions. Government and non-government development organization have traditionally worked either separately or with the latter acting as a supporting agency to the government’s efforts. The ADP subverts this practice by recognizing the development partners of the programme as integral part of the programme’s framework who are expected to help district administrations in improving the quality of governance at the grassroots.

Lastly, the idea of cooperative federalism is married with competitive federalism under this intervention. The idea that competitiveness is essential to augmenting productivity is typically applicable to markets, but the ADP brings this idea into the domain of governance to accelerate development. As an exercise of competitive federalism, the programme promotes competition at all levels of governance through a ranking system in order to stimulate districts to work towards improving their ranks, and in the process, achieve the common goal of development.

The real-time monitoring and data transparency on the progress of the districts keeps the spirit of competitiveness alive among districts. Since a dynamic dashboard displays the impact of the programme across key parameters on a real-time basis, government bodies are able to monitor the progress of their respective districts, see tangible results of their efforts, identify nodes for improvement and draw comparisons with other districts. The dashboard is open to public, thus allowing citizens to monitor progress too. The real-time data collection coupled with data transparency overall inculcates a spirit of competitiveness among districts, which maximises their efficiency to reach closer to the goals. It also allows administrations to identify the local needs and finetune their interventions and implementation strategies in response to the needs, as opposed to following a one-size-fits-all approach.

The combination of cooperation and competition serves to promote competition as well as encourage partnership between districts, so that they are not only inspired to work towards achieving the developmental goals but the least developed districts are also able to seek the support they need. The concept of cooperative competition has therefore become a linchpin to the programme in driving change.

Although the initiative only began in 2018, the programme has begun to bore fruits. The districts have especially made huge strides in the health and education sectors, wherein they have reached closest to their respective targets. In two years since the inception of the programme, 10% of the districts were successful in achieving their health and nutrition targets, and the more developed districts were only 5-10 percent away from reaching their education targets. This was made possible because the programme attempted to diverge from the conventional path and re-imagine governance.

The article was published with Economic Times on February 25, 2021.