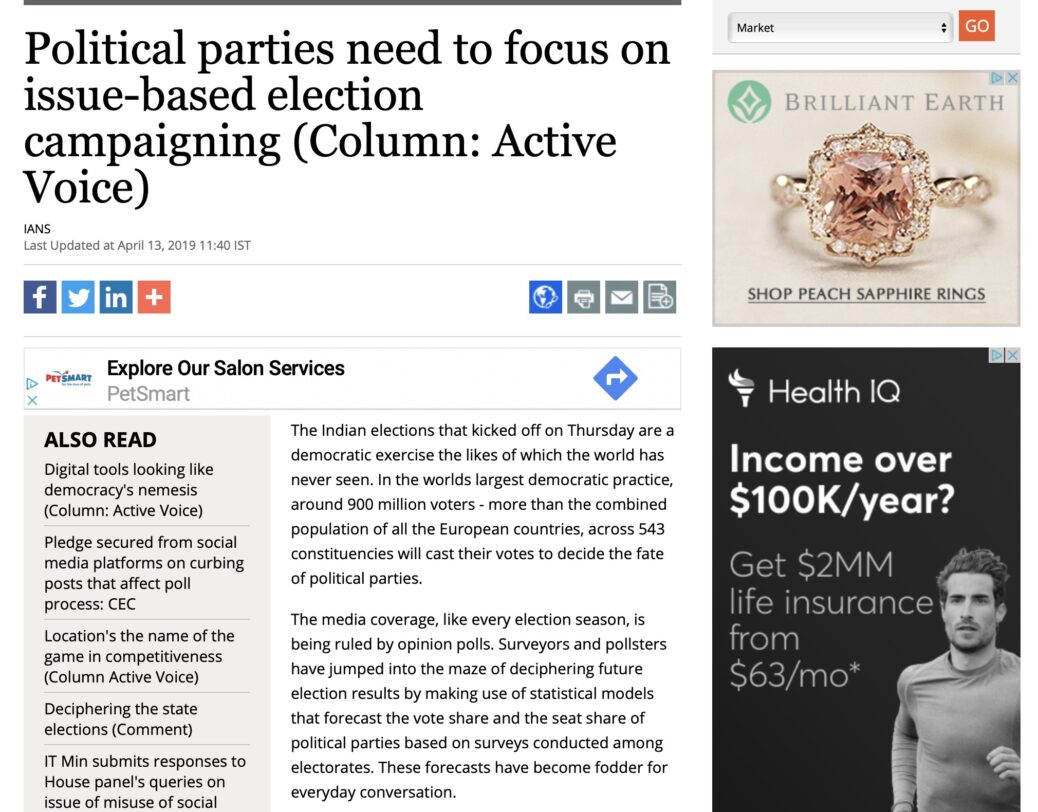 The Indian elections that kicked off on Thursday is a democratic exercise the likes of which the world has never seen. In the world’s largest democratic practice, around 900 million voters – more than the combined population of all the European countries, across 543 constituencies will cast their vote to decide the fate of political parties.

The media coverage, like every election season, is being ruled by opinion polls. Surveyors and pollsters have jumped into the maze of deciphering future election results by making use of statistical models that forecast the vote share and the seat share of political parties based on surveys conducted among electorates. These forecasts have become fodder for everyday conversation.

However, it is difficult to trust the results of opinion polls as the results differ significantly from poll to poll. Given this situation, many researchers have examined the results of opinion polls and claimed that they have failed repeatedly to predict election outcomes. A recent study presented in the book ‘The Verdict’ demonstrates that the success rate of such polls in estimating the number of seats that winning party may bag is just 62 percent. On similar lines, a study conducted by India Today raised concerns over the fact that day by day opinion polls are drifting away from reality. One of the main findings of that analysis is that the errors in predicting Lok Sabha elections are on the rise since 1998-99.

In such a situation where the gap between opinion poll predictions and actual outcomes is widening it is important to have a better statistical model in place to make sense of what factors are driving the outcomes behind elections. This can be done by indicating which types of economic and political data most meaningfully correlate with election outcomes.

An attempt to develop such a holistic model that can provide precise estimates of voting behaviour must take into account all the factors that citizens keep in mind while casting their votes. In most democracies, a common belief is that good economics makes for good politics. This belief suggests that an incumbent party’s chances of winning elections increase if the region experienced positive economic growth during their term.

In India, however, this popular notion is not supported by data. A simple correlation analysis between the growth rate of GDP per capita and the incumbent party getting re-elected reveals a negative relationship between the two, implying that in most cases despite higher growth incumbent does not get re-elected. This observation helps us in concluding that support base and vote bank for parties in India is dependent on a host of factors other than economic development.

The two other factors that shape voting decisions of Indian voters might be social issues and public sentiment towards the government. A broad spectrum of the social issues from shelter to sanitation, education to health, personal rights to inclusion must be considered. This is important because of presence of diversity across Indian regions. For some living below the poverty line or on bare minimum income, social wellbeing would mean better shelter facilities, free healthcare, improved nutritional facilities, etc. For rich people, this would mean new opportunities to grow and improve their life.

The sentiment towards the current government can be captured through two aspects. One, the vote share of the national ruling party in the state elections held during their tenure. Second, the narrative build by traditional media platforms about leaders and political parties and social media engagement of the political parties. The traditional media platforms provide voters with the facts and figures that can help them to make informed choices. And the increased exposure of voters to social media platforms like Facebook, Twitter has provided a direct link between voters and leaders. More and more candidates are relying on social media campaigns to win elections. By serving as the source of information, media has the power to impact voting behaviour of citizens.

A probit regression model, with the dependent variables as ‘the chances of incumbent coming back to power’ and explanatory variables as economic development, social wellbeing, sentiment towards the government and the presence of a strong regional party, for the period 1999 to 2014 results in a success rate of 80 percent.

The model predicts that for the upcoming elections the constituencies of Uttar Pradesh will play a key role in deciding the electoral fortunes of political parties. The incumbent Bhartiya Janata Party is expected to win 215 seats with surety while there are 33 seats in which any political party can turn the tables in their favour by focusing on the right set of issues.

The factors, according to the model, that dominates the arena of decision making are social issues wherein a larger piece of the puzzle comes from how inclusive the incumbent party is. It is observed that while casting their vote, people keep in mind how acceptable a leader is towards caste-based minorities and other socially backward groups, how they treat women, and what is the level of atrocities against these minority groups during the party’s tenure. The second crucial factor which dominates the arena of decision making is the sentiment towards the government. Indian voters are known for their anti-incumbency tendencies. Many instances from the Indian political history can be cited that prove that dealing with anti-incumbency has been the biggest challenge of the ruling party. For instance, BJP won a wave election in 2014 by channeling citizens anti-incumbency sentiments against the Indian National Congress.

Therefore, the lesson for political parties is to devise mechanisms that focus on issue-based election campaigning, which will enable favourable public opinion and increase their chances of winning.