India needs to guard against technological disruption in manufacturing 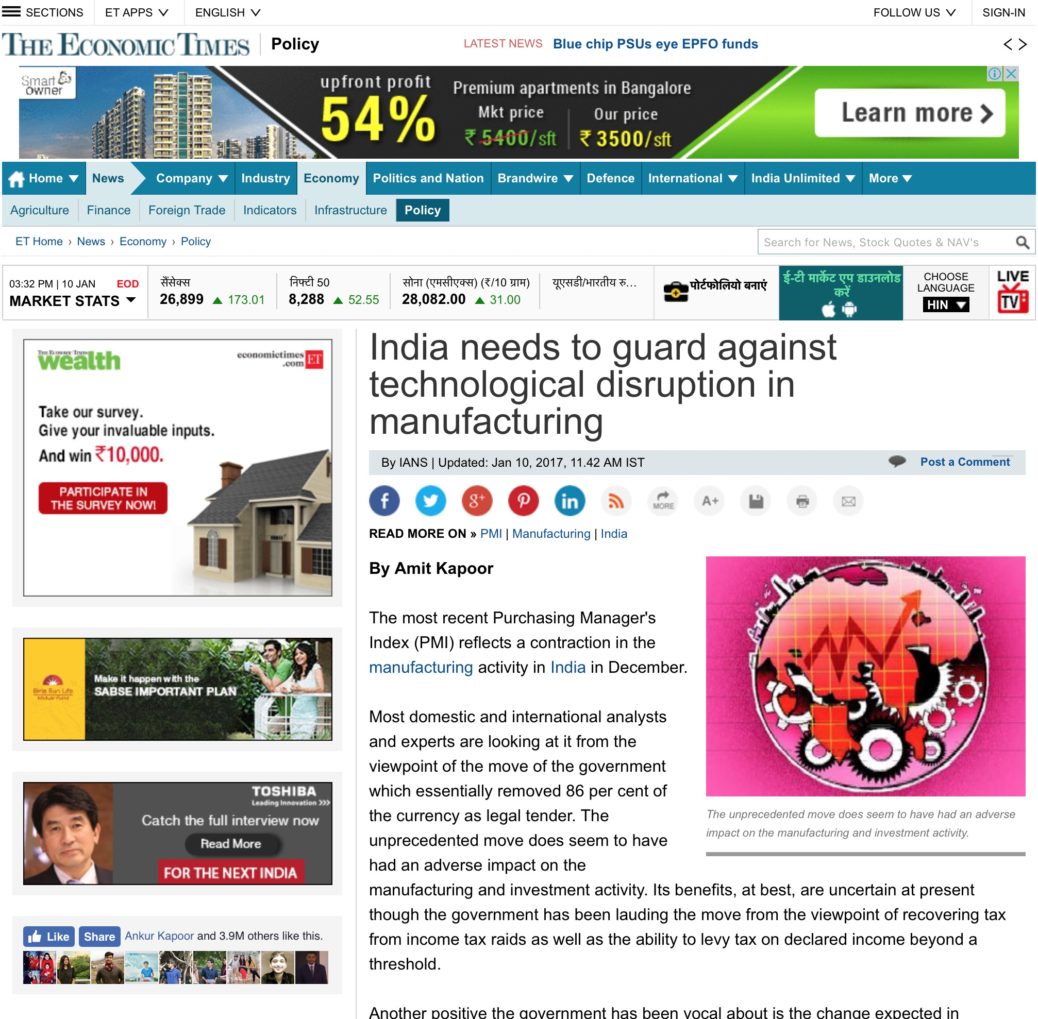 The most recent Purchasing Manager’s Index (PMI) reflects a contraction in the manufacturing activity in India in December.

Most domestic and international analysts and experts are looking at it from the viewpoint of the move of the government which essentially removed 86 per cent of the currency as legal tender. The unprecedented move does seem to have had an adverse impact on the manufacturing and investment activity. Its benefits, at best, are uncertain at present though the government has been lauding the move from the viewpoint of recovering tax from income tax raids as well as the ability to levy tax on declared income beyond a threshold.

Another positive the government has been vocal about is the change expected in behaviour of people to a less-cash economy. The All India Manufacturers’ Organisation has, meanwhile, issued a study which shows a 50 percent dip in revenues and 35 percent job losses for SMEs. The government must carefully look into these figures.

First, it traces the development of the sector and notes that the possible reason for its non-performance is due to crucial reforms not happening. It notes that India’s initial market opening process did include reforms in the capital markets and FDI into distinct sectors. However, market reforms initially remained untouched. These included labour legislation and laws pertaining to land markets. Even today, they remain restrictive for investment and competitiveness to grow.

The reforms largely helped in the development of the service industry but could not enable the rise of the manufacturing industry, which, in addition, required critical linkages like electricity, water and reduction in burdensome regulations. However, these were not initially available, which resulted in services taking off while manufacturing lagged. Thus, only some states are good in manufacturing.

The second point is the important locations for manufacturing. The best states in this regard are Maharashtra, Tamil Nadu and Gujarat, that can be thought to be at the forefront of manufacturing competitiveness. They are also good in industrial clusters and SMEs. The northeastern states and states like Bihar and Jharkhand perform relatively poorly on the composite index. The reasons for these are many and complex, but their inability to provide a stable environment for investment in manufacturing to take place is the primary factor.

Third, another major factor for India to consider over the medium to long term is automation. Most Indian businessmen and policymakers are not according it the attention automation and the rise of the robots should be getting. The need for paying attention to this is simple. The Make in India national manufacturing policy aims to create 100 million additional jobs by 2022. Even if the manufacturing sector has a multiplier of 5, generating 20 million jobs is not easy. And that too in an environment where automation is fast replacing manual jobs.

Finally, how does one create a nation that has manufacturing prowess?

There are three or four important points which should be undertaken by governments as well as corporations. First, factoring market reforms even at the state level will go a long way in boosting manufacturing competitiveness. Some states have taken the lead; others need to follow. Second, 8-10 states should take the leadership role and establish collaborations with countries on furthering the Make in India initiative.

Third, a branding and mindset reset is needed to change India’s image from a low-cost re-engineering country to one which is known for quality, excellence and innovation. Fourth, skill shortage is a major concern for the industry at present. The need for formal skill training can hardly be over emphasised in the wake of automation.

Finally, the focus of governments in India should be on a manufacturing competitiveness ecosystem which thinks about the meaningful interactions between humans, capital and factories for productive employment. Over the years, India’s policymakers need to be vigilant about the technological disruption that could severely impact manufacturing and job growth in India and align their policies accordingly.

Published with Economic Times on January 10, 2017.