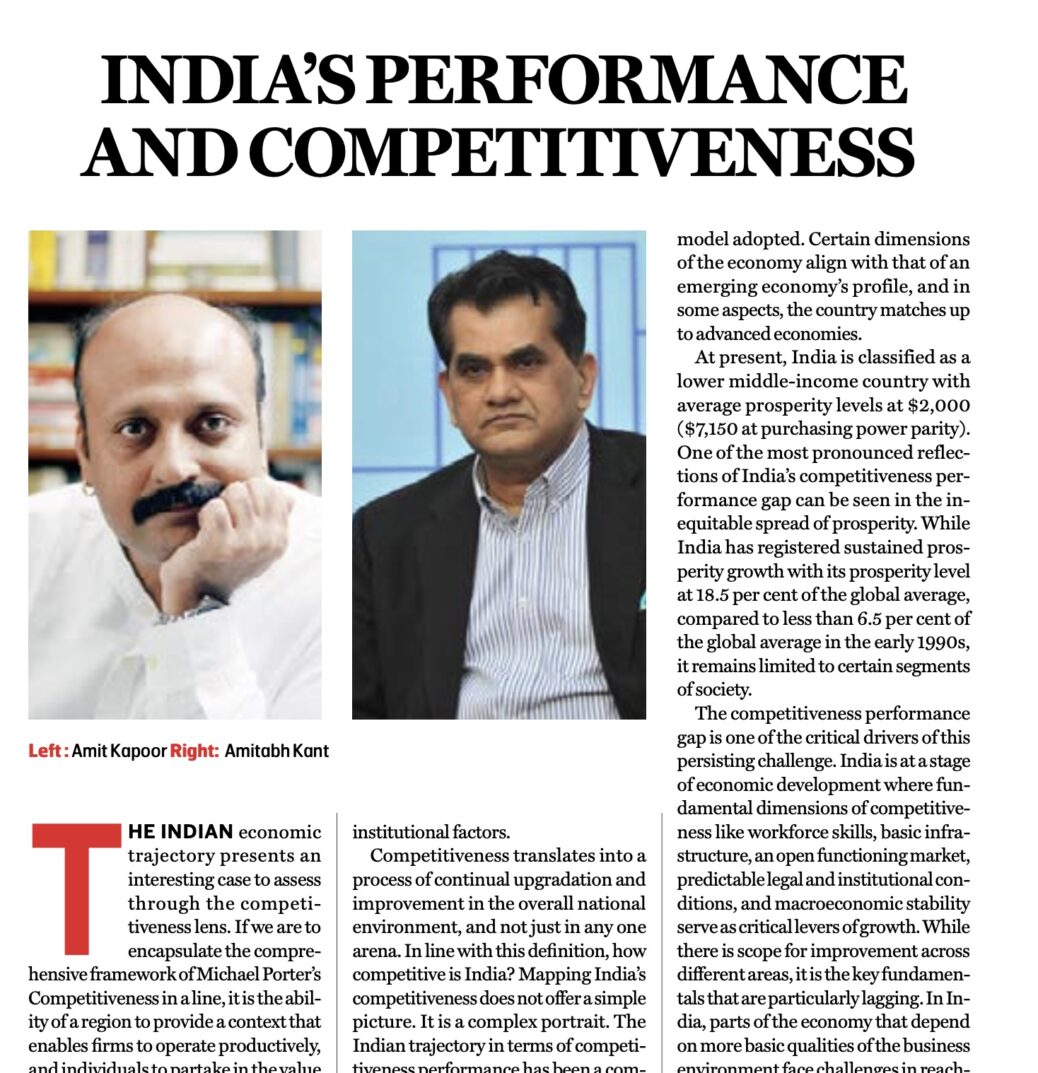 The Indian economic trajectory presents an interesting case to assess through the competitiveness lens. If we are to encapsulate the comprehensive framework of Michael Porter’s Competitiveness in a line, it is the ability of a region to provide a context that enables firms to operate productively, and individuals to partake in the value generated through their productivity. The context here implies an environment encompassing both the microeconomic foundation – factors affecting labour, and firms, directly – as well as the macroeconomic foundation – the overall fiscal and monetary set-up, and institutional factors. Competitiveness translates into a process of continual upgradation and improvement in the overall national environment, and not just in any one arena. In line with this definition, how competitive is India? Mapping India’s competitiveness does not offer a simple picture. It is a complex portrait. The Indian trajectory in terms of competitiveness performance has been a combination of gains and challenges. While circumstances vary for every region, India stands out given its sheer size, complexity, and internal heterogeneity. This makes it a task to classify India into categories based on the stage of economic development or growth model adopted. Certain dimensions of the economy align with that of an emerging economy’s profile, and in some aspects, the country matches up to advanced economies.

At present, India is classified as a lower middle-income country with average prosperity levels at $2,000 ($7,150 at purchasing power parity). One of the most pronounced reflections of India’s competitiveness performance gap can be seen in the inequitable spread of prosperity. While India has registered sustained prosperity growth with its prosperity level at 18.5% of the global average, compared to less than 6.5% of the global average in the early 1990s, it remains limited to certain segments of society. The competitiveness performance gap is one of the critical drivers of this persisting challenge. India is at a stage of economic development where fundamental dimensions of competitiveness like workforce skills, basic infrastructure, an open functioning market, predictable legal and institutional conditions, and macroeconomic stability serve as critical levers of growth. While there is scope for improvement across different areas, it is the key fundamentals that are particularly lagging. In India, parts of the economy that depend on more basic qualities of the business environment face challenges in reaching higher levels of productivity.

One of the key fundamentals that call for attention is the skill and education area. Leveraging the pool of human resources available has been an extensively discussed theme, but its relevance cannot be overstated. The education system has made notable progress over the years. The overall Gross Enrolment Rate (GER) in elementary education saw an eleven per cent increase, from 81.6 in 2001 to 93.03 in 2018. Similarly, secondary enrolment has also jumped from 45% in 2000 to 75% in 2020. However, the quality of education has not matched up to this expansion. This adds to the employability challenge in the labour market, making the transition from school to work difficult. In 2021, only 45.9 per cent of graduates were found employable. The high rate of unemployment among the educated is not just a function of insufficient jobs but also of inadequate skills.

The link between skills and employment is yet to be adequately harnessed. However, labour productivity has registered improvements over the decades. Between 2008-09 and 2016-17, average labour productivity growth accelerated to 4.5 per cent from 3.9 per cent during 1993-94 to 2007-08.  Labour mobilization, on the other hand, comes across as a challenging competitiveness fundamental. Boosting labour force participation, which stood at 49.8 per cent in 2017-18, is necessary to reap the favourable demographic dividend.

Yet another area where India has immense potential to close the performance gap is infrastructure. Physical infrastructure, digital infrastructure and energy – all three dimensions together form the backbone of the environment in which firms operate. Despite the significant progress on this front, there are infrastructural needs yet to be met sufficiently. In addition to infrastructure, the cost of doing business determines the operational ease for firms. While the reforms since the 1990s have opened many markets, a slew of rules and regulations burden existing firms, hinder their scalability, and pose barriers for potential entrants. There has been progress with over 33,000 compliances simplified, rationalized, digitized or decriminalized by central ministries and states/union territories combined, there is still much ground to cover to improve the overall environment for businesses and individuals.

Competitiveness depends on a wide range of mutually reinforcing factors. When some parts lack, ultimately, the whole suffers. Large parts of the Indian economy and society lack the ability to tap into the opportunities that the more developed dimensions of India’s business environment provide. For the overall national context to offer an atmosphere conducive to growth for all, the existing gaps in India’s competitiveness fundamentals must be plugged. An analysis of India’s competitiveness performance gap calls for each area to be assessed deeply.

The article was published with Business World.