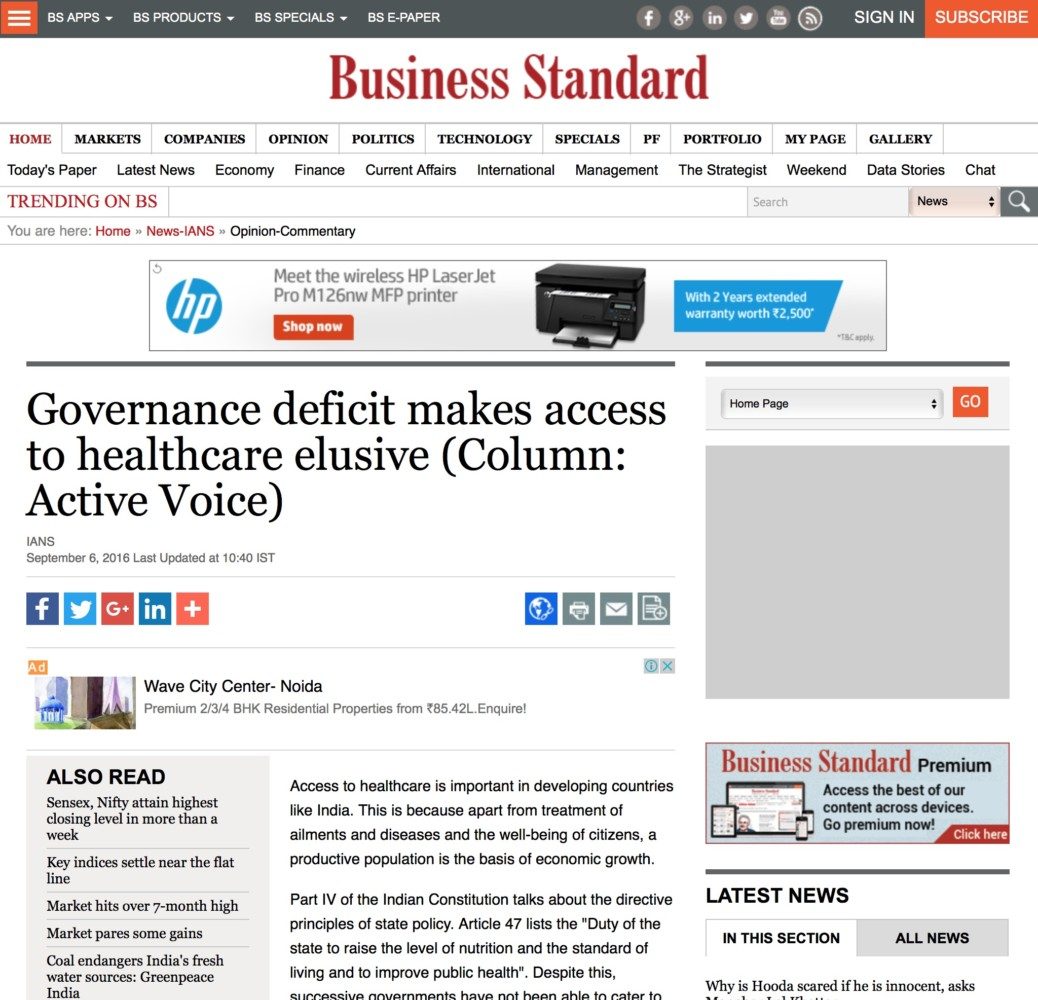 Access to healthcare is important in developing countries like India. This is because apart from treatment of ailments and diseases and the well-being of citizens, a productive population is the basis of economic growth.

Part IV of the Indian Constitution talks about the directive principles of state policy. Article 47 lists the “Duty of the state to raise the level of nutrition and the standard of living and to improve public health”. Despite this, successive governments have not been able to cater to the nutrition and standards of living of a large section of citizens. There are four principal reasons for this.

First, the overall system seems inadequate to cater to India’s vast population. For example, the total number of hospitals, public health centres (PHCs) and the private healthcare sector together seems inadequate to cater to the demand in spite of being big in absolute numbers. This is also true about healthcare professionals — be they doctors or nurses or other professionals in the sector.

Together, the system is simply inadequate to cater to demand. The private healthcare sector has developed as the public healthcare system was overburdened and thus inefficient. Also, experts and policymakers have been contemplating solutions to look at healthcare from the “reduction in demand” perspective. This includes improving hygiene as well as the environment to prevent ailments and diseases. But despite efforts, the present system is inadequate for the demand that Indiahas for healthcare services.

Second, the shortfall in healthcare infrastructure and healthcare demand arose due to funding constraints. Funding in the healthcare system is another issue, which results in low healthcare access. The healthcare expenditure as a percentage of GDP by the government is one of the lowest in the world. Here, another issue is the way funds are disbursed to the states and spent. Often the funds are delayed and this results in non-utilisation in critical schemes and programmes of the union and state governments. As a result, a majority of the people bear healthcare costs with high out-of-pocket spending, as insurance penetration is low.

Allied to the problem of government funding is the problem of up-skilling professionals and human resources in the sector, especially rural areas, as a major portion of funds are not utilised because there is a lack of skilled healthcare professionals.

Third, there seems to be the issue of governance deficit and regulatory capture. A lot of the problems arose because of too many laws and regulations impeding the normal development of the sector. For instance, for each segment of producers/institutions and care providers like doctors, equipment manufacturers, drugs and medicine producers and hospitals there are a host of laws and regulations which have traditionally inhibited access.

Thus, a large number of healthcare providers are today not formally recognised by the states. It is important to see what can be done to help them provide access which is both greater in number and more effective. The governance deficit arises with inefficiency and corruption being rife in both the public and the private sector.

Fourth is the issue of awareness and monitoring in the context of diseases as well as in terms of what needs to be done to eradicate them. A classic case in point in this regard is polio, which has been eradicated from the country. This was a result of awareness campaigns as well as active participation from people and all other stakeholders. Monitoring was also a regular feature of the effort to eradicate polio. But despite this, a large number of diseases still exist and are proliferating in India.

The problem is acute in Indiaas it is one of the very few countries where both communicable and lifestyle diseases exist in such large numbers. The changing disease patterns also contribute to the challenge of healthcare access. The focus from the industry should be on innovating to find drugs that are able to cure most diseases prevalent in India.

Over the next few decades, all the stakeholders should work in a collaborative spirit to enable healthcare access to all people. Such an effort would lead to outcomes that would be in line with Article 47 of the directive principles of state policy.

Published with Business Standard on September 6, 2016.