From Paper to Field: MGNREGS as the face of India’s Social Protection System 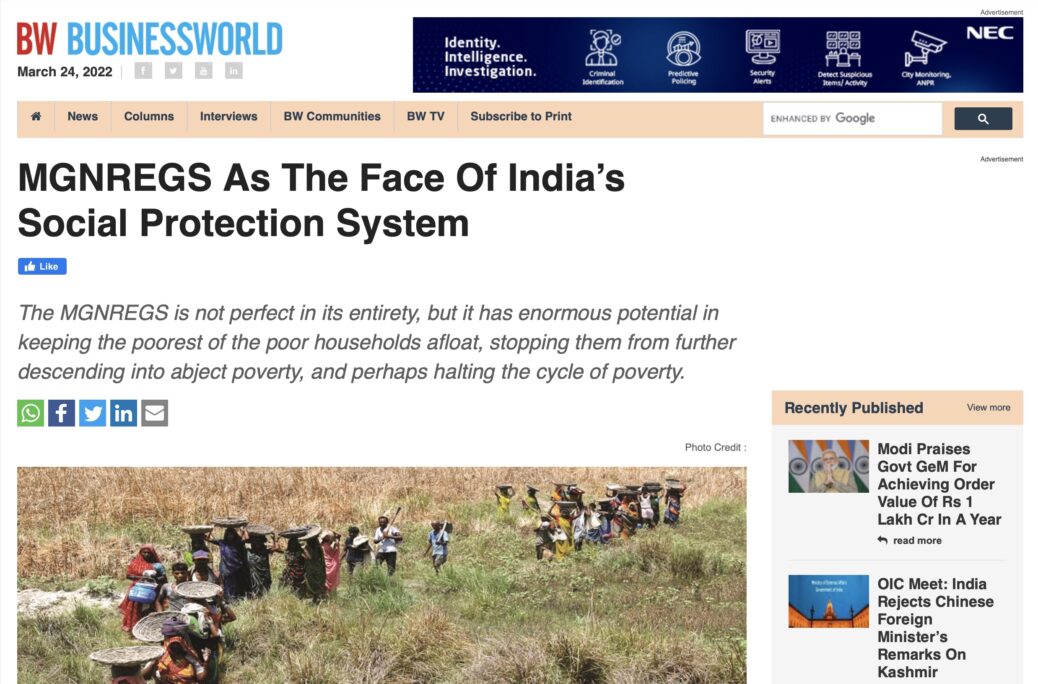 As per ILO’s World Social Protection Report 2020-22, 8.8% of global working hours were lost in 2020, equivalent to 255 million full-time jobs, adversely affecting the unskilled or low-skilled labour on whom the loss of employment fell the hardest. This not only exacerbated socioeconomic inequalities with a significant population falling in poverty but will also have enormous ramifications for labour market inequalities. According to the World Bank economic forecasts, with almost 100 million pushed into pandemic-induced poverty, the absence of resilience to socioeconomic shocks among a significant population has revealed the issues with comprehensive coverage of social protection systems worldwide. Most importantly, it has shown the indispensability of social protection schemes as the pandemic triggered a massive rollout of assistance programs and social aids as immediate retributions to the losses incurred globally. In India, a relatively sophisticated social protection system with schemes like Mahatma Gandhi National Rural Employment Guarantee Scheme (MGNRES) and Public Distribution System (PDS) aimed at uplifting the poorest of the poor. The Indian experience with social protection is far from perfect with administrative and logistical issues underlining it but carries with it an essential lesson in providing existential security to the most vulnerable.

MGNRES, launched in 2005, has been one of the most ambitious social protection schemes to be implemented globally. The social security scheme aims at providing 100 days of wage employment to every household in a financial year whose adult member is willing to do unskilled manual work. As a welfare scheme, it offers livelihood security to rural households. However, the true mettle of the scheme was tested during the pandemic when the lockdown tapered the total number of employment days provided to rural households. Hailed as an exemplary public scheme in one of the most populated countries, where a significant portion of the population benefits from the scheme, the stakes on MGNRES are huge. With the first wave witnessing the return of migrant workers to their home states further aggravating the early crisis, the burden on the scheme was evident. In 2019-20, a cummulative140,719,967 cr job cards were issued to registered households, while in 2020-21, 154,287,504 cr job cards were issued. The fact that 2020-21 saw a nearly 10% jump in cumulative numbers of households with issued job cards from that in 2019-20 (as per the data provided by the Ministry of Rural Development) is proof enough to show the dependence on the scheme as a fallback option during highly volatile times like the pandemic. Moreover, in 2020, an additional 86,81,928 job cards were issued as compared to 64,95,823 in 2019.

Additionally, there was a rise in the total employment generated under the demand-driven scheme during the financial year of  2020-21. According to the press release by the Ministry of Rural Development, in July, a total of 391,630,385 cr jobs were provided, which is a striking 102% increase from 194,174,791 cr in July 2019. While April 2020, with the onset of national lockdowns, saw a decline in employment through the scheme, it quickly accelerated in the next few months, with the country slowly opening up. By May 2020, the allocation of funds in the scheme was increased by 40,000 cr, increasing the total budget allocation by 18.69% compared to 2019.

An increase in these numbers indicates the importance of the scheme in generating rural employment and drives home the point that India now needs a similar scheme for urban households. For one, the presence of such a system in urban spaces could have avoided the massive reverse migration during the first wave and counter the imbalance between rural and urban employment generation. Furthermore, badly hit sectors like construction, hospitality, and transportation have reduced employment, triggering a labour crisis in urban spaces. An urban employment scheme will only bridge the gap. MGNREGS is not perfect in its entirety, but it has enormous potential in keeping the poorest of the poor households afloat, stopping them from further descending into abject poverty, and perhaps halting the cycle of poverty. With its rights-based program, civil society organisations have also been able to leverage its design for pro-poor targeting. While the program is de-linked with any poverty criteria (i.e. it does not subscribe to the poverty line for eligibility purposes), its social security architecture has focused on “self-targeting” of vulnerable populations and enhancing community-based accountability tools with a more proactive role for the Panchayats.

The article was published with Business World on March 1, 2022.