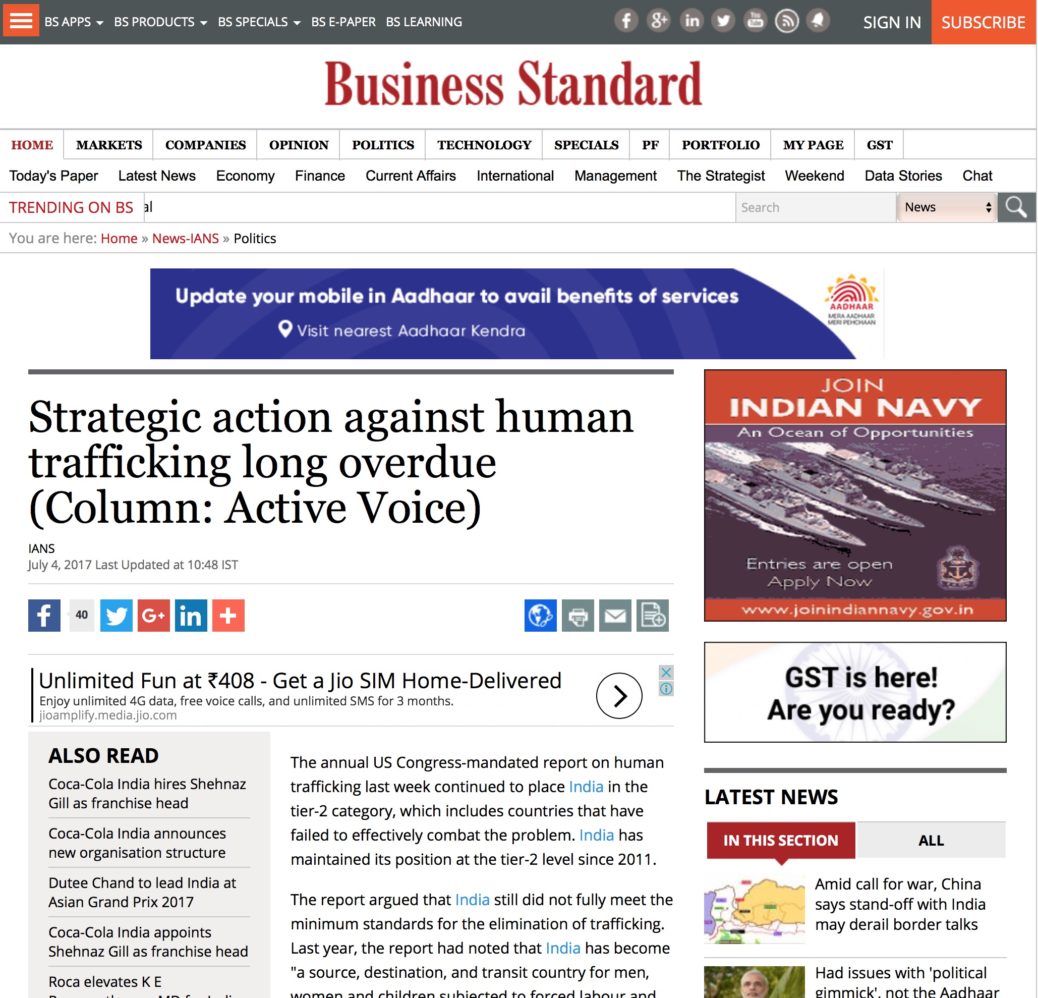 The annual US Congress-mandated report on human trafficking last week continued to place India in the tier-2 category, which includes countries that have failed to effectively combat the problem. India has maintained its position at the tier-2 level since 2011.

The report argued that India still did not fully meet the minimum standards for the elimination of trafficking. Last year, the report had noted that India has become “a source, destination, and transit country for men, women and children subjected to forced labour and sex trafficking”.

Over the years, the problem of human trafficking has become a cause for serious concern in the country. According to the UN Office for Drugs and Crime, South Asia, with India at its centre, is the fastest-growing region for human trafficking in the world. The Global Slavery Index 2016, published by the Walk Free Foundation, said that India has the highest number of enslaved people in the world, with about 18 million children and adults being victim of modern slavery.

These trends hurt India and her citizens in more ways than one. First, productivity among people arises from individual agency and economic freedom. The economic gain resulting from that productivity is indispensable for national growth. Human trafficking robs the victims of these basic entitlements, destroying their lives in the process, and divests the nation of crucial labour supplies, tearing apart the fundamental structure of its local economies. It also leads to decreased safety of vulnerable populations, enveloping them in a vicious cycle of penury and misery.

Second, in the case of children, it deprives them of crucial years that they should be spending in school. From the very beginning, victims of child trafficking are damned to poverty in the broader sense as they are robbed of their capability to live a good life in the future. The number of affected children is clearly not insignificant in India and the loss of their livelihoods due to trafficking will be inimical to the nation in the long run.

Despite the magnitude of the problem and the threat it poses to Indian citizens and its economy, it is only considered a peripheral issue among law enforcement agencies. First, poor states like Chhattisgarh and Jharkhand are burdened with problems like Maoist insurgency and civil unrest rendering human trafficking a lower priority. Second, anti-human trafficking units in states suffer from a serious shortage of resources and funds to tackle the problem. Third, anti-trafficking unit officials report that police in a lot of rural areas fail to consider trafficking as a crime and just see it as poor children migrating for better livelihoods.

Such factors of leniency have led to the development of a lucrative trafficking market that now amounts to $150 billion globally. A net profit margin of over 70 per cent makes sex trafficking one of the most profitable businesses across the globe. To curb such activities, basic economics dictates making business operations costly from both the demand and supply sides.

On the supply side, there are a large number of traffickers who have ease of entry and exit and offer differentiated products to buyers. On the demand side, there exist multiple buyers who find it profitable to employ trafficked labour as it allows them to bypass government labour regulations.

Coordinated international law enforcement and legal cooperation as well as enforcing stringent punishment for those caught trafficking individuals would increase the cost of doing business from the supply side. Alongside, creation of meaningful job opportunities, especially targeted in areas where the incidence of trafficking is high, can ensure that potential victims do not have to depend on “placement agencies” for work that are usually fronts for trafficking.

Also, availability of work through legal means would increase the opportunity cost of engaging in illicit activities for traffickers. However, due to a continuous supply of vulnerable populations and crime prevention obstacles, attempting to decrease the supply of human trafficking is economically less efficient than doing so from the demand side.

Increasing the cost of trafficking from the demand side means decreasing the benefits to employers in employing trafficked labour. One way of doing so is by increasing consumer awareness about the horrors trafficked individuals face so that consumer boycotts of goods and services produced through illegal means can decrease the benefits that employers gain from trafficking.

Another way is to increase the level of police administration intent on curbing trafficking offenses and solving the problem of paucity of resources with anti-trafficking teams. Better data collection and analysis can also help law enforcement officials crack down on employers with added effectiveness. The reduction of demand for trafficked population would decrease the price and number of trafficked victims. This would eat into the profit margins from the supply side as well and make trafficking a costly business in general.

It must be noted that a detailed Trafficking of Persons (Prevention, Protection and Rehabilitation) Bill, 2016, is in its draft stages in Parliament, which devotes considerable focus on fast-tracking court proceedings and providing adequate victim rehabilitation. These are noble aims in themselves but equal, if not more, attention should also be paid to making the trafficking business costly and unviable so that the problem is resolved in the long term. Such a strategic action plan backed by robust economic thinking could help India get rid of its tier-2 status in human trafficking.

It would also be economically beneficial for India to deal with this problem on an immediate basis to improve upon its investor-friendly image since action against child labour will serve as a firewall against the aggressive consumer backlash in the West against Indian suppliers. This would give a much-needed push to Prime Minister Narendra Modi’s “Make in India” campaign. Modi needs to take a decisive stance on the issue of trafficking, considering the fact that it holds the fragile future of Indian children at stake.

The article was published with Business Standard on July 4, 2017