Is the Economy Out of the Woods Yet? 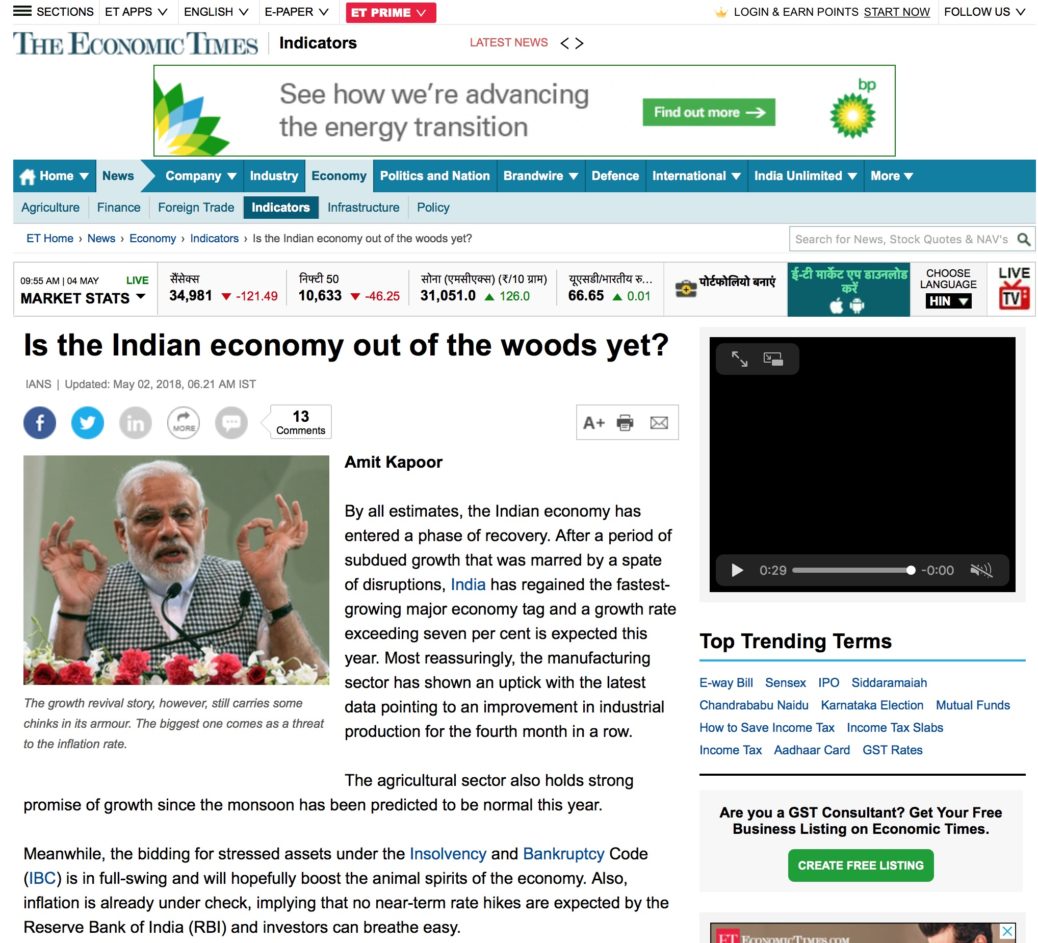 Is the Economy Out of the Woods Yet?

By all estimates, the Indian economy has entered into a phase of recovery. After a period of subdued growth that was marred by a spate of disruptions, India has regained the fastest-growing major economy tag and a growth rate exceeding 7 percent is expected this year. Most reassuringly, the manufacturing sector has shown an uptick with the latest data showing an improvement in industrial production for the fourth month in a row. The agricultural sector also holds a strong promise of growth since monsoon has been predicted to be normal this year.

Meanwhile, the bidding of stressed assets under the Insolvency and Bankruptcy Code (IBC) is in full-swing and will hopefully boost the animal spirits of the economy. Also, the inflation is already under check, implying that no near-term rate hikes are expected by the RBI and investors can breathe easy. There are also some grey areas within the economy. The fiscal situation is slightly tight but not unmanageable. The rupee is weakening but since it was already over-valued, a slight adjustment could give the required boost to the export sector. In all, it seems like a good year of healthy growth awaits.

The growth revival story, however, still carries some chinks in its armour. The biggest one comes as a threat to the inflation rate. Until now, India has witnessed a decline in inflation mainly due to a fall in global commodity prices. Oil, gold and coal constitute almost half of India’s imports. The steep decline in prices of these commodities over the last few years has kept inflation under check. The trend is gradually reversing this year. Oil prices have already risen to levels last seen in 2014 on looming geopolitical risks over the Iran deal. Similarly, gold prices are also expected to heat up as global economic uncertainties over issues like potential trade wars can result in short-term tailwind towards such safe assets.

If such pressure builds upon commodity prices, over which India has little control, inflation might become difficult to control. Such a scenario would result in a hawkish stance by the RBI and a rise in economy-wide interest rates harming investment sentiments that have already been precariously low over the last few years. Also, lower oil prices over the last few years have helped the government improve upon the fiscal front due to a reduced subsidy bill and increased excise taxes. These added financial benefits for the government will end as oil prices increase this year. The fiscal position, therefore, might become highly vulnerable. The only saving grace is that subsidies have been rightly withdrawn for petrol and diesel and, hence, the price rise of these commodities will be borne mainly by the consumer.

Second, India’s growing trade imbalance is another cause of concern. In February, India’s trade deficit rose to a 56-month high. Imports have expanded at a faster pace than exports over the last year. Since the imposition of the goods and services tax (GST), delays in refunds of input tax credits have hurt export activity. The widening of the current account deficit is not a cause for alarm in itself but combined with high inflation and fiscal deficit, it can weigh heavily on the rupee. The Indian rupee has already become one of Asia’s weakest currency in 2018. Any further dip could critically weaken the economy’s fundamentals.

Third, the fiscal deficit, which has been kept under strict control until now, might itself become a concerning aspect for the economy. Despite all efforts by the government to keep a tight leash on the fiscal front, a lot depends on the tax revenue collection across the country. However, revenues have dipped since the corporate tax was reduced from 35 percent to 25 percent in the last budget and GST revenues have mostly stayed lower than expected. This has made the government dependent on non-tax revenue sources like disinvestments and additional dividends from the RBI to meet its fiscal deficit targets. Since the government has already revised the target upward from 3 percent to 3.3 percent, there remains no more room for manoeuvring. Therefore, the government needs to be wary of any mis-steps on its path towards fiscal consolidation.

All of these macroeconomic concerns from inflation to the trade imbalance to the fiscal deficit are intricately tied amongst themselves. A high fiscal deficit could result in higher inflation and interest rates, which would dampen investment activity while a worsening current account due to costlier imports could also lead to a similar outcome. The situation is as if the Indian economy is walking across an economic landmine and any slipup could being an end to all prospects of recovery.

The article was published with Business Standard, Economic Timesand Moneylife on May 2, 2018.