India is in danger of losing its competitiveness 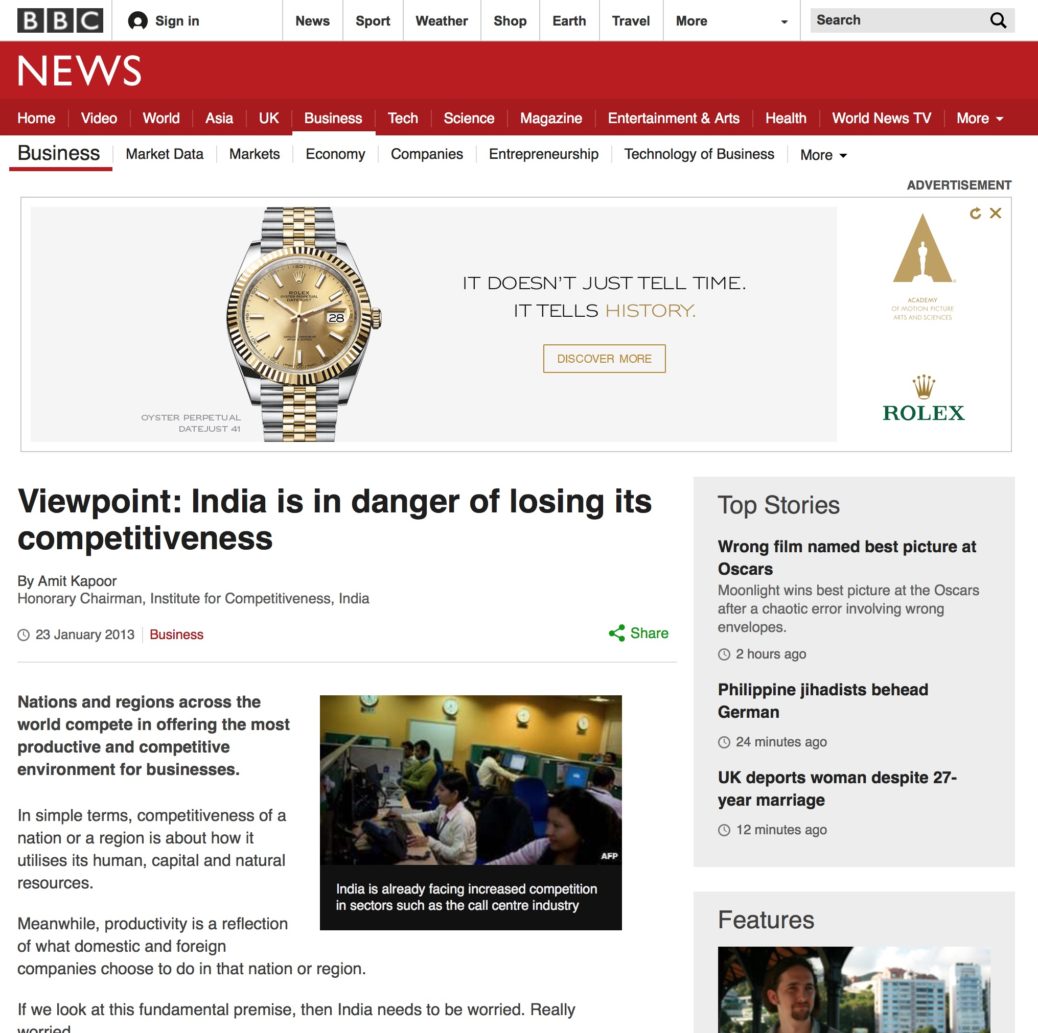 “The government’s policies in areas such as infrastructure, interest rates, fiscal deficit and inflation have not yielded the desired results.”

Nations and regions across the world compete in offering the most productive and competitive environment for businesses.

In simple terms, competitiveness of a nation or a region is about how it utilises its human, capital and natural resources.

Meanwhile, productivity is a reflection of what domestic and foreign companies choose to do in that nation or region. If we look at this fundamental premise, then India needs to be worried. Really worried.

India has been focusing on and celebrating the wrong achievements.

It is great to see the emergence of IT as an industry within the country. However, one has to remember that the sector has built its business on cost arbitrage.

The problem with this model is that it is short lived and would last until the time another low cost location emerges from the shadows.

One can already see the impact of this on the call centre industry in India, which is facing the heat from the Philippines.

India also suffers from the obsession that it is a services economy.

This idea is inherently hazardous as it hurts innovation in key sectors such as agriculture or manufacturing, which are paramount to India’s growth going forward.

India is also often touted as having a demographic dividend, with majority of its population being young.

On the face of it, it does seem like a big advantage to have. But dig a bit deeper and one begins to realise that what India is actually facing is nothing short of a demographic disaster.

According to some estimates, only 4-6% of graduates in India are skilled enough to get employed. That doesn’t do any favours to India’s competitiveness.

India churns out close to 1.2 million engineers and MBAs graduates per year. But a majority of these graduates are job seekers and not job creators.

That needs to change and the emergence of an entrepreneurial culture is critical for that to happen.

To add to India’s woes, the disparities between its various states are increasing at an alarming rate.

If not addressed in time, this can create huge social problems.

At the same time, if some states continue to be more prosperous than the others, it could lead to a big migration of labour from poor to richer states, the beginnings of which we are already starting to see.

That would make it even tougher to boost long-term sustainable growth in the poorer states, as bigger firms may be reluctant to set up shop there, which would hurt the economy and also dent job creation.

Stuck at the bottom?

Any economy typically has an evolutionary cycle wherein its growth is driven either by factor, investment or innovation.

The first stage in the cycle is that of factor-driven economies which focus on low-cost basic factor conditions, such as low-skilled labour, natural resources and geographic location.

At the next stage are investment-driven economies which have the ability to produce products and services of high quality using efficient methods but at lower wages than advanced economies.

At the end the cycle, are innovation-driven economies that focus on innovative products and services at the global technology frontier.

India today without a doubt is stuck at the factor-driven stage and is within an arm’s reach to get the plot wrong at this level as well.

Economies at this stage of development need to focus on input costs, macro-economic, political and legal stability, efficient basic infrastructure and lowering the regulatory cost of doing business.

India seems to be lagging behind, and in some cases even failing on these parameters.

India’s growth story, which has been ongoing since it unleashed reforms in 1993 has been faltering in recent years.

The government’s policies in areas such as infrastructure, interest rates, fiscal deficit and inflation have not yielded the desired results, prompting one to question if it even has an economic strategy.

As it looks to spur a fresh wave of economic growth, the biggest question that India needs to answer is: What kind of a market economy does it wish to be?

An economy that is driven by populist measures and subsidies, that have started to hurt growth and will only add to its troubles in the long run, or one that enhances the efficiency of doing business and encourages investment and innovation.

If it chooses the former, it is likely to remain stuck at the bottom of the growth evolution.

If it decides on the latter it will result not only in a revival in growth but also see it move up the economic evolutionary cycle.

However, that journey will be far from easy. It has to keep in mind that investment-driven economies need to work on building efficiencies, enhancing local competition, market openness, incentives and rules for encouraging productivity.

India has long way to go to achieve that. It can perhaps start by trying to maintain its competitiveness.

The article was published with BBC News Business on January 23, 2013.