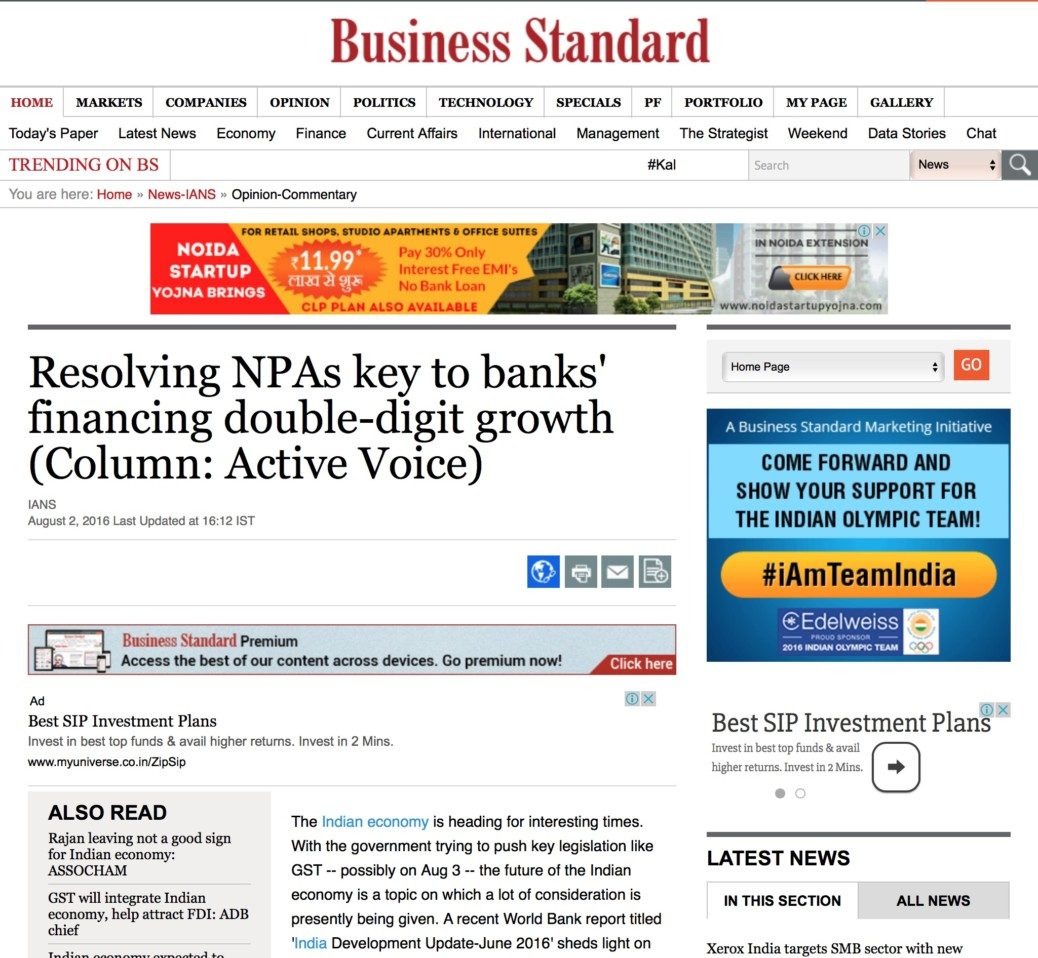 First, it puts into perspective the present growth. The Indian economy has seen an acceleration of growth up to 7.6 per cent y/y in FY2016, up from an average of 6.5 percent from FY13-15. For continuing the momentum, the report stresses on the need to tackle four risks.

These include what may arise out of a deficient monsoon (which seems unlikely at present — given the flood like situation in several parts of India including the northeast and Assam). Second, even if the monsoon is normal, boosting rural consumption, especially after two years of deficient rainfall, seems a little difficult. Third, given the waning oil dividend, the government may find it difficult to meet the fiscal consolidation target to which it has stuck in the past. Finally, the export demand may continue to deteriorate amidst a tepid recovery in global economy.

These four risks will have to be tackled effectively to be able to grow and exceed the present growth rate that India is witnessing.

Second, the update focuses on the financial sector and its capability to finance double-digit growth. This includes looking at two related issues: a structural transformation of the financial sector into a more market-oriented and competitive one and addressing the issues of public sector banks (PSBs), most notably that of non-performing assets (NPAs) in the coming months.

Both these issues are important, especially considering the fact that the Indian financial sector, in spite of liberalisation, is still largely in the hands of the public sector. The problem of bad debt is one of the most pressing problems in the sector and will need solutions before it can look to finance double-digit growth.

The update also focusses on the impact of the Fourteenth Finance Commission (FFC) on the state budgets and expenditure. The update has analysed the budgets of 20 states which account for more than 90 per cent of India’s GDP. The analysis tells us that total transfers to the states increased from 5.5 per cent of GDP (actuals) to 6.2 percent (budgeted estimates) in 2016-17.

The exercise also looked at three effects of implementing the FFC’s recommendations. These included the overall devolution effect (ODE), share effect (SE) and grant effect (GE). The analysis shows that all states gained but the extent of this varied significantly: from 0.06 percent of the GSDP in the case of Andhra Pradesh to 5.34 percent in the case of Mizoram.

Also, health and education expenditure increased in 13 of the 14 states for which data was available. This is in contrast to what has been a general perception on decreasing allocations to health and education. Rajasthan and Kerala stand out as spending the equivalent of 70 percent of additional resources on health, education and infrastructure.

The update also has some key suggestions. These include accelerating the development of capital markets in India, along with resolving the issues of road and power sector, which have resulted in the problems of accumulated NPAs in the past. Also, there is need is to look at increasing the commercial orientation of the banking sector.

Over the next few years, Indian policymakers should incorporate some of the key suggestions and aim at increasing India’s growth rate while addressing its imminent risks and challenges.

Published with Business Standard on August 2, 2016.