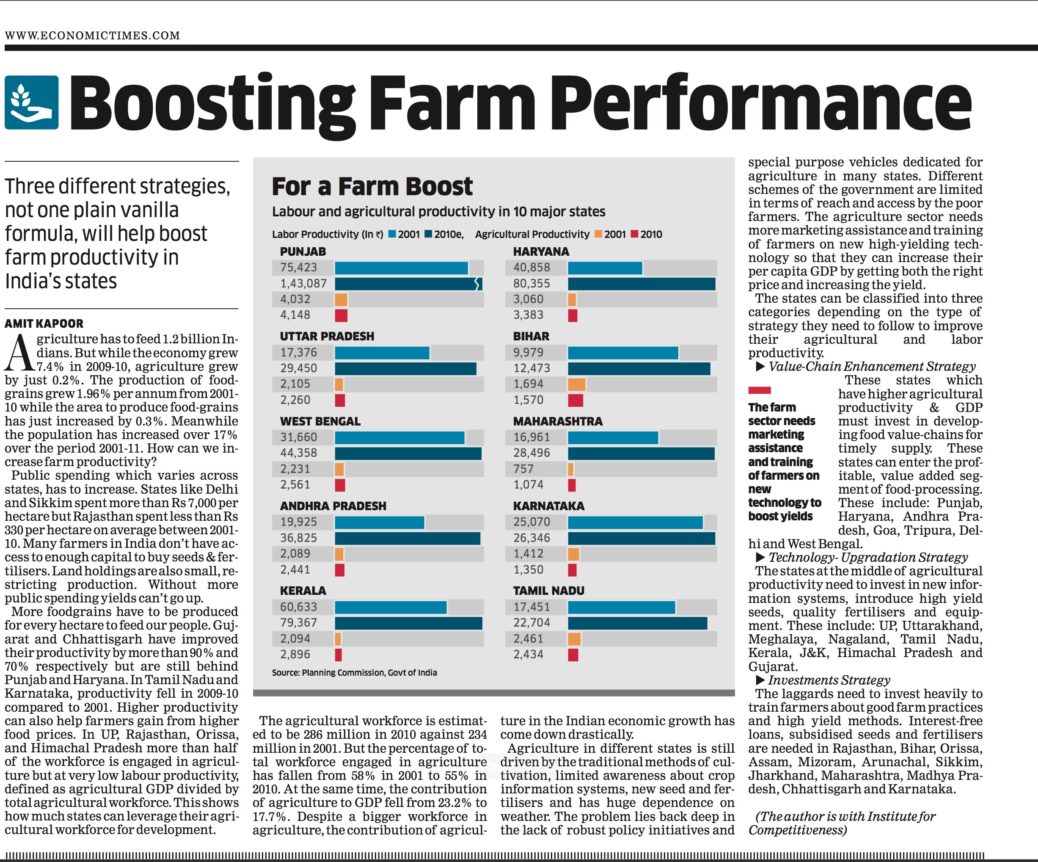 Agriculture has to feed 1.2 billion Indians. But while the economy grew 7.4% in 2009-10, agriculture grew by just 0.2%. The production of foodgrains grew 1.96% per annum from 2001-10 while the area to produce food-grains has just increased by 0.3%. Meanwhile the population has increased over 17% over the period 2001-11. How can we increase farm productivity?

Public spending which varies across states, has to increase. States like Delhi and Sikkim spent more than Rs 7,000 per hectare but Rajasthan spent less than Rs 330 per hectare on average between 2001-10. Many farmers in India don’t have access to enough capital to buy seeds & fertilisers. Land holdings are also small, restricting production. Without more public spending yields can’t go up.

More foodgrains have to be produced for every hectare to feed our people. Gujarat and Chhattisgarh have improved their productivity by more than 90% and 70% respectively but are still behind Punjab and Haryana. In Tamil Nadu and Karnataka, productivity fell in 2009-10 compared to 2001. Higher productivity can also help farmers gain from higher food prices. In UP, Rajasthan, Orissa, and Himachal Pradesh more than half of the workforce is engaged in agriculture but at very low labour productivity, defined as agricultural GDP divided by total agricultural workforce. This shows how much states can leverage their agricultural workforce for development.

Agriculture in different states is still driven by the traditional methods of cultivation, limited awareness about crop information systems, new seed and fertilisers and has huge dependence on weather. The problem lies back deep in the lack of robust policy initiatives and agriculture in many states. Different

schemes of the government are limited in terms of reach and access by the poor farmers. The agriculture sector needs more marketing assistance and training of farmers on new high-yielding technology so that they can increase their per capita GDP by getting both the right price and increasing the yield.

The states can be classified into three categories depending on the type of strategy they need to follow to improve their agricultural and labor productivity.

Value-Chain Enhancement Strategy -These states which have higher agricultural productivity & GDP must invest in developing food value-chains for timely supply. These states can enter the profitable, value added segment of food-processing. These include: Punjab, Haryana, Andhra Pradesh, Goa, Tripura, Delhi and West Bengal.

The article was published with Economic Times on May 28, 2011.