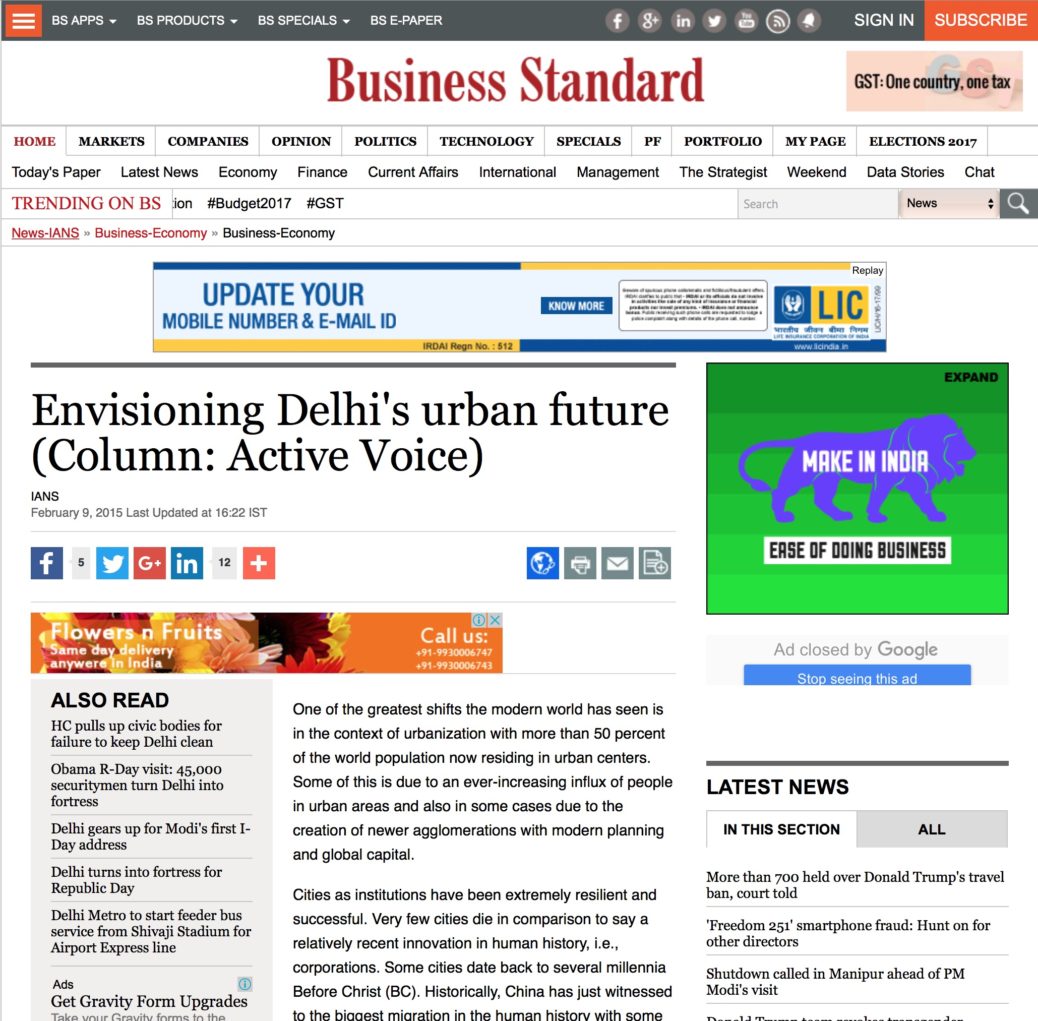 One of the greatest shifts the modern world has seen is in the context of urbanization with more than 50 percent of the world population now residing in urban centers. Some of this is due to an ever-increasing influx of people in urban areas and also in some cases due to the creation of newer agglomerations with modern planning and global capital.

Cities as institutions have been extremely resilient and successful. Very few cities die in comparison to say a relatively recent innovation in human history, i.e., corporations. Some cities date back to several millennia Before Christ (BC). Historically, China has just witnessed to the biggest migration in the human history with some 440 million people moving to eastern and southern coastline cities of China in search of a better life from the 1979-2009 period.

But some of the recent reports point to the fact that China has a massive problem of pollution in its cities. Dense smog is a major problem impacting not only visibility, but also having an adverse effect on the health of residents. India being the second most populous country after China with approximately one third China’s land has traditionally had a sluggish pace of urbanization with just over 31 percent of the people residing in urban areas in 2011. This is all set to increase with some 600 million urban residents by 2031. India’s problems in urbanization are similar to those of China, especially with respect to pollution. Already, Delhi is one of the most polluted cities in the world with smog a frequent reality and few people remembering that a river ‘flows’ through the city.

Delhi is one of the oldest and one of the largest urban agglomerations in India along with Bombay (now Mumbai). It also qualifies for the ‘megacities’ tag with some 16.78 million people residing in the NCT of Delhi as per census 2011. The city has been continuously inhabited for at least the past two millennia. Delhi took shape in its modern form in the early part of the 20th century with a prominent British architect designing a part of the city. Delhi today has several layers of history embedded in it that are visible in the monuments and historical places within the city as also in the lives and struggles of its residents.

The city has reimagined itself several times in the past most prominently in the early part of the 20th century when it was made the capital of India. Post-independence it remained the ‘political capital’ of India with its power circles, elite and bureaucratic setup. It is still the political center in India with the seat of the union government.

The city has for quite some time now in need of a new consensus of sorts for facing its urban future. The recently concluded elections have provided some interesting insights not only into the political process at the ‘heart of India’ but also reflected the challenges and opportunities that lie in the years ahead. Irrespective of whosoever forms the government in Delhi, the governance especially with respect to treatment of citizens will have to improve at all levels.

Some of the questions that the new government is expected to delve into and provide a solution to includes how to make the city more livable. Focusing on better safety, better environment, better education, better health and better housing for residents may be a good starting point. A word of caution about safety, ‘makeshift solutions’ like installing more cameras for women security seems to catch the popular imagination but is advisable for testing at a small scale and then scaling up. A more gradual and nuanced method is focusing on behavioral and attitudinal changes in people either through education or through training- but that will take a longer time and is ‘alas’ also politically difficult to measure.

Another pertinent question is – Is making the city more livable necessarily going to translate into it being a ‘global city’ or essentially a ‘competitive’ or ‘creative’ or a ‘smart’ one? The answer to this is not necessarily so. Making Delhi a global city will require dramatic changes in the existing processes (with more transparency. etc.). It will also require a strategic foresight about the future, including how to improve the sphere of influence of Delhi in at least South Asia and beyond. For making it a ‘competitive’ and ‘creative one’ – fostering tolerance, being open to newer thoughts, ideas and technologies is necessary. Also, critical is the ability to attract and keep global talent, and capital will hold the key. For making the Delhi ‘smart’, it will require the creation of an of an informational blueprint of the city and an overhaul of the informational processes. Some other things that merit attention include focusing on improving choices of citizens with respect to conveyance and travel times. On the financial front it must be kept in mind to not focus too much on welfarism in the short term as it can have disastrous consequences not only for the economy but the life of residents in the longer term.

Ultimately what the city should or would become is for the residents and policymakers to envision and then implement together. Understanding the narrative of other cities may provide a perspective to policymakers who will govern Delhi in the years to come. The collective intelligence of many is always greater than a few. Can Delhi lead the way for other cities in India and elsewhere to emulate, or will it fall flat to provide the leadership required to live up to the expectations of its residents? Only time can tell.

Published with Business Standard on February 9, 2015.