Press Freedom is a compromised reality in India 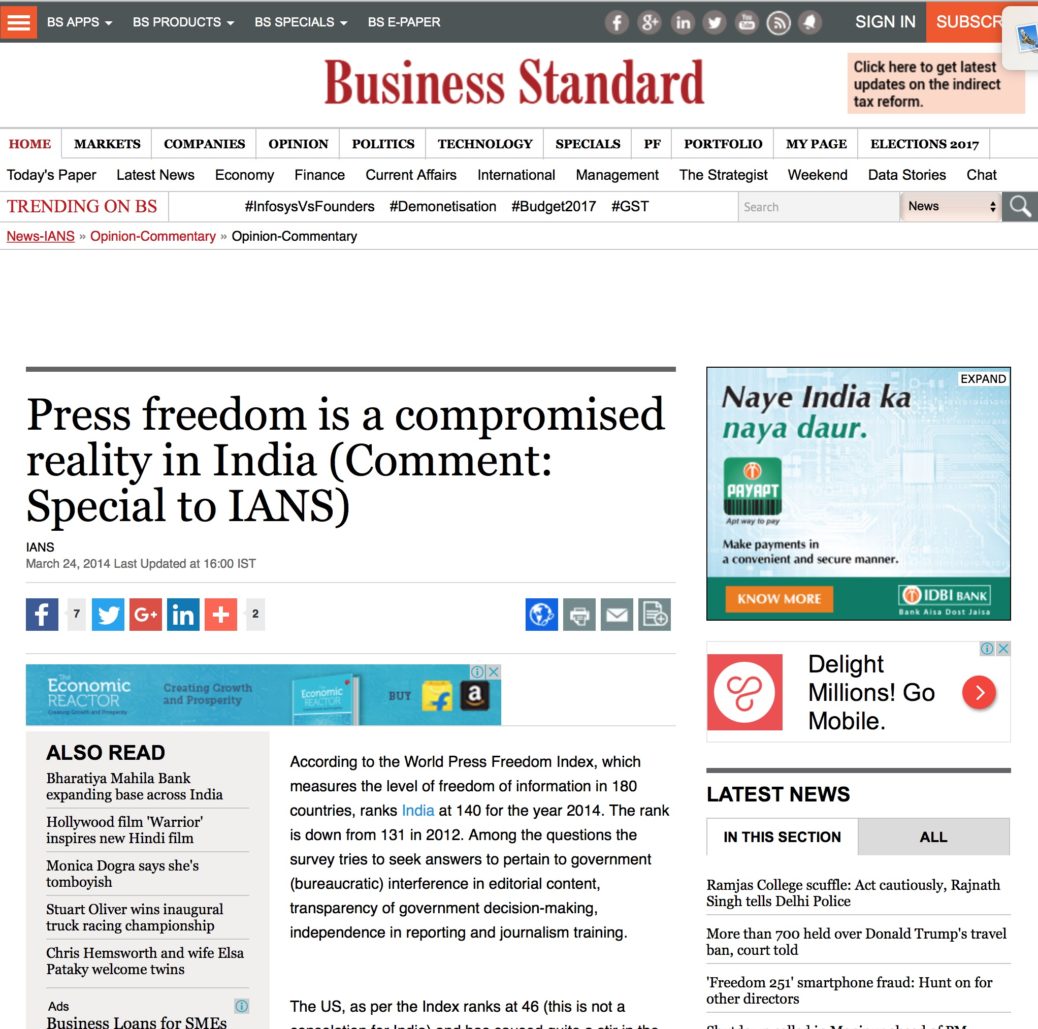 According to the World Press Freedom Index that measures the level of freedom of information in 180 countries ranks India at 140 for the year 2014. The rank is down from 131 in 2012. The questions that the survey tries to seek answers to are pertaining to government (bureaucratic) interference in editorial content, transparency of government decision making, independence in reporting, journalism training etc.

US as per the Index is ranked at 46 (this is not a consolation for India) and has caused quite a stir in the country and a raging debate. In India we have not yet blinked an eyelid and this leads to the following questions –

These questions take us back and compels to revisit to one of the most scathing books (Manufacturing Consent by Noam Chomsky and Edward Herman) I have read on media, its role, the power it yields, the influence it has et al. The book in its introductory chapter writes – “In countries where the levers of power are in the hands of a state bureaucracy, the monopolistic control over the media, often supplemented by official censorship, makes it clear that the media serves the ends of a dominant elite”.

In addition it goes on to iterate further that “the elite domination of the media and the marginalization of dissidents occur so naturally that media news people, frequently operating with complete integrity and goodwill, are able to convince themselves that they choose and interpret the news objectively and on the basis of professional news values”

Quoting above doesn’t mean or suggest that I agree with or endorse the views. It though helps us in drawing closer to a reflection of reality that is worrying and maybe exceedingly inconvenient for the media to handle.

I would rather think that the most important point of debate would be the state of journalistic ethic in the country.

We have had great editors and continue to have them in the country who have followed the journalistic ethic to the hilt. What is though worrying is that for every great editor or a journalist we can find one who is intellectually compromised, is clearly biased, doesn’t opine facts, verify the antecedents, plays on the rhetoric, presents shocking analysis or clearly had connived with the powers to be and quite likely the state bureaucracy.

The influence is not only through the state bureaucracy but also through carefully crafted relationship campaigns that are not only dangerous as it clouds the judgment, interpretation of the situation, issue at hand, maybe make the journalist intellectualize the information provided and deem the same to be reality, sensationalize the information to make it newsworthy etc.

The worrying idea here is not what is being done though what it can do to the reputations of people, the twists in can bring on public opinion etc. In addition what we see within editors or journalists is the streak of stalling information or sharing views that sound good to their intellect. This could be a reflection of the editors or journalists idea of perfection and his interpretation of reality though this can create severe information and opinion asymmetry in the system.

At the end of the day we shouldn’t forget that in thriving democracy it is respect for diversity of idea, sharing of opinions, providing correct and sound information and public debate. In India we have shades of the same though we need to continuously work towards making the profession more analytical, providing for interpretations that appeal the intellect and are clearly not driven by personal agendas that could be influenced by the power hoarders. If this doesn’t happen or we don’t make strides towards the same the residual value of an errant journalist or editor could be categorized as nuisance value.