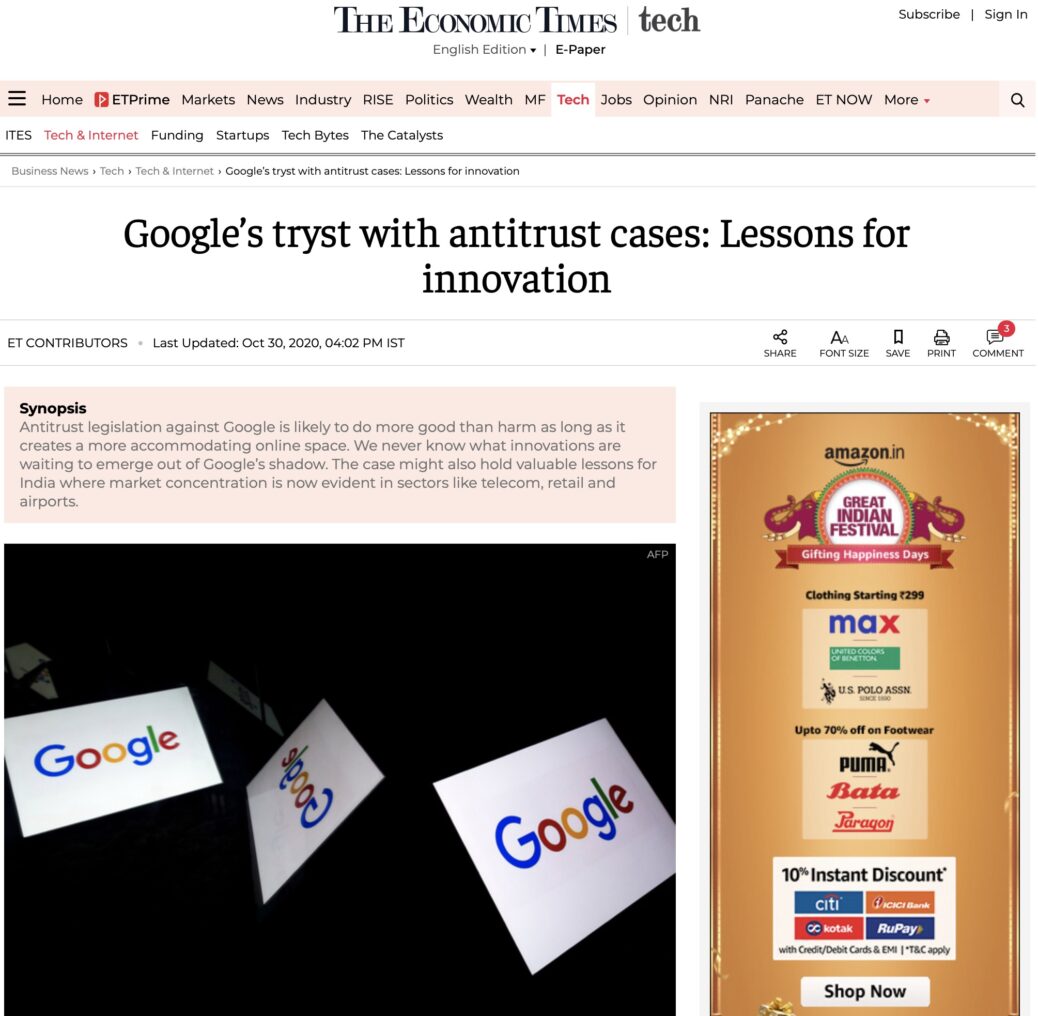 Over the last few years, the Big Tech firms have been in the limelight more for the wrong reasons than right. The five American technology giants – Amazon, Apple, Alphabet, Facebook, and Microsoft – have come a full circle from revolutionising the world to becoming the biggest companies in the history of mankind to emerging as a threat to the very fabric of modern society in recent times. The menace of fake news, the invasion of privacy, the alleged influence in election outcomes, and the problem of addiction to social media have a common root in the meteoric success of the Big Tech firms.

More recently, the issue of antitrust has been added to that list – not for the first time in the history of technology companies, however. A bipartisan antitrust panel in the US House of Representatives questioned the chief executives of Amazon, Apple, Alphabet and Facebook earlier this year and last week Google was slapped with the biggest antitrust case in a generation. The company faces a long road ahead of itself to prove that it is not unfairly dominating the online search engine space.

The charges have been long expected given that Google has been accused of search-engine bias multiple times. Since 2010, the European Union has initiated three antitrust cases against the company and has levied fines of over €8 billion. In India, the Competition Commission of India (CCI) has also fined the company $21 million for search-bias.

The search-engine bias has taken various forms. Several smaller web companies like Foundem and Skyhook with superior technology than Google have accused the search engine of downgrading their results in favour of its own products. Others like Yelp and Getty Images have accused Google of presenting results from their websites in a way that does not require a user to visit their websites at all. Since Google accounts for 87 percent of online searches worldwide, smaller players have no choice but to stay on it.

Google’s defence against such accusations has been that it does what is best for the customer. The defenders of the company argue that if Google ever fails to satisfy its users, the market will punish it the same way it brought down Yahoo, AOL, and Myspace. However, the previous century has shown that whenever technological advancement gives a company an edge over its competitors, monopolies follow. Standard Oil is the leading example of how its success in refining oil and making it cheaper for household use resulted in it cornering the market for itself and obliterating competition. The US Supreme Court decided to break it up into 34 firms.

Even technology firms have tended towards monopolisation owing to their innovative successes and have faced their fair share of antitrust legislation because of it. Interestingly, each time newer technologies and new firms have eventually emerged. After IBM found itself embroiled in antitrust lawsuits in the 1970s, new start-ups like Microsoft and Apple found a space to thrive. In the 1990s when similar charges were levied against Microsoft, another small start-up called Google emerged and outgrew the former over time.

The debate on how antitrust affects innovation is a long-standing one and has no straightforward answer. The argument in favour of antitrust law is that a monopolist has no reason to innovate and create superior products unless these efforts can increase its market power. So, regulatory action is necessary to foster competition and innovation. On the other hand, there are also arguments on how it can diminish innovation. If firms start believing that aggressive innovation can draw unwanted attention from regulators, the incentive to innovate might wane. The literature (Gregory Day, 2017) finds a middle ground by arguing that antitrust promotes innovation when it maintains competition by preserving the number of players in the market. But the opposite is true when it limits how exactly those firms compete against each other.

The role of antitrust, thus, should not be to regulate how competition takes place but to ensure a level-playing field for any new player to enter the market based on its merits without being crushed by the big players. If Google had been crushed by Microsoft two decades ago, Bing would be the market leader, and no one would be any wiser of the possibility of a better alternative. In that spirit, the antitrust legislation against Google should benefit the world as long as it creates a more accommodating online space. We never know which innovative ideas are waiting to emerge out of Google’s shadow. The case might also hold some valuable lessons for India where market concentration is becoming evident in sectors like telecom, retail, and airports.

The article was published with Economic Times on October 30, 2020.