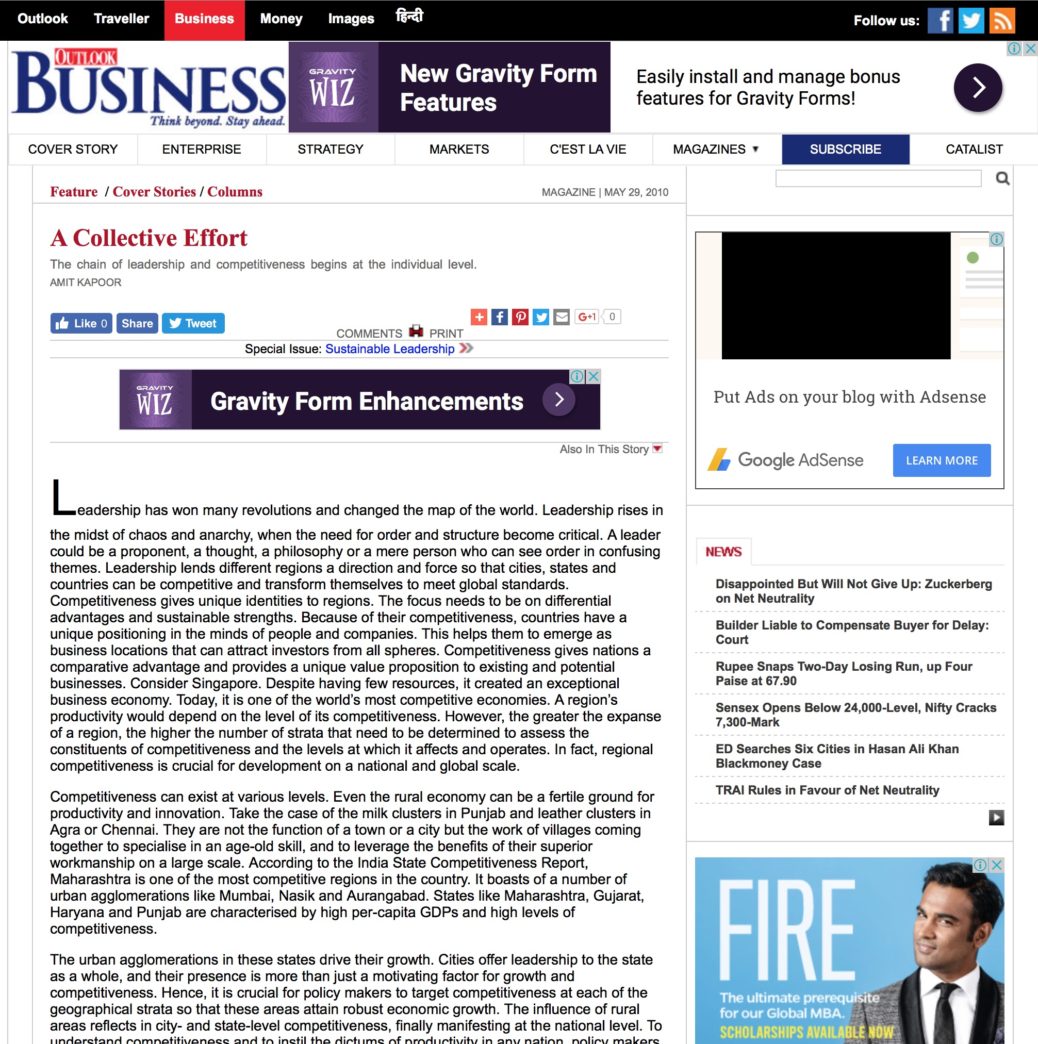 Leadership has won many revolutions and changed the map of the world. Leadership rises in the midst of chaos and anarchy, when the need for order and structure become critical. A leader could be a proponent, a thought, a philosophy or a mere person who can see order in confusing themes. Leadership lends different regions a direction and force so that cities, states and countries can be competitive and transform themselves to meet global standards. Competitiveness gives unique identities to regions. The focus needs to be on differential advantages and sustainable strengths. Because of their competitiveness, countries have a unique positioning in the minds of people and companies. This helps them to emerge as business locations that can attract investors from all spheres. Competitiveness gives nations a comparative advantage and provides a unique value proposition to existing and potential businesses. Consider Singapore. Despite having few resources, it created an exceptional business economy. Today, it is one of the world’s most competitive economies. A region’s productivity would depend on the level of its competitiveness. However, the greater the expanse of a region, the higher the number of strata that need to be determined to assess the constituents of competitiveness and the levels at which it affects and operates. In fact, regional competitiveness is crucial for development on a national and global scale.

Competitiveness can exist at various levels. Even the rural economy can be a fertile ground for productivity and innovation. Take the case of the milk clusters in Punjab and leather clusters in Agra or Chennai. They are not the function of a town or a city but the work of villages coming together to specialise in an age-old skill, and to leverage the benefits of their superior workmanship on a large scale. According to the India State Competitiveness Report, Maharashtra is one of the most competitive regions in the country. It boasts of a number of urban agglomerations like Mumbai, Nasik and Aurangabad. States like Maharashtra, Gujarat, Haryana and Punjab are characterised by high per-capita GDPs and high levels of competitiveness.

In this chain of competitiveness, leadership must emerge at every geographic stratum to fully measure the importance of a coordinated effort for the nation as a whole and a region as a part. Just like anti-trust laws at the national level, regional-level tax policies can also have an impact on the growth of a region as a business destination. Similarly, while capital market conditions may decide the direction of investment flow, local education systems and training centres determine the return on these investments. Autonomous bodies are set up to take strategic decisions at village, city or state levels but they are not sufficient to transform a country’s competitiveness to match global standards.

Value chains across geographical strata must align with each other to give the economy a competitive advantage as a whole. They exist at the local, regional, national and global levels. Integration of value chains across different levels allows productivity of the economy to increase from the bottom up. Hence, policy decisions need to keep a larger picture in mind. New York, London, Tokyo and Seoul are just small regions in the countries where they are located. However, they created a unique positioning for themselves on a global scale. The competitive advantage created by these cities for their countries generated a gigantic impetus for the development of these nations as a whole.The interplay of the public and the private sectors will have a big impact on business strategy and environment. It would be unfair to leave leadership to the government alone. Look at Nestle’s experience in Punjab. The company built a productive milk cluster in Moga, buying milk from more than 75,000 farmers through 650 local dairies. It established milk purchasing organisations in each town to create a collection and processing infrastructure, educated farmers on hygiene and animal health, and provided other facilities to create a milk cluster. The whole initiative brought prosperity to the regions in and around Moga.

The government and other local bodies are facilitators. The onus of actual formulation and implementation of strategy falls on the private players. This chain of competitiveness and leadership begins at the individual level and leads from the firm to the industry at the macro level. Leadership of the individual determines whether the region will become an IT hub or a base for agricultural processing. These decisions determine the operations at the firm level, and hence, an industry is formed. Leadership at the individual, firm and industry levels will determine the competitiveness of the business environment.

The two chains, individual-to-industry and village-to-country, exist simultaneously. Good leadership merges the chains to create a synthesis of value and growth. For example, the present context demands an active role from the facilitator in the process of development by directly aiding the private sector reach for growth and prosperity. Companies can operate efficiently subject to a supportive environment. The social, political and legal context has to be in alignment with the technology of the firms. Hence, competitiveness of the economy can be sustained only when the public and private sector align towards a common goal.

It would be misleading to assume only large industries are competitive. Local industries should also be given opportunities to create a competitive base as they serve local markets. Typically, smaller industries are known for innovations, while the onus of income and employment growth falls on larger firms. Bangalore changed the way Indian professionals were seen but the harbingers of change were not the multinationals, but small firms.

At the same time, one cannot ignore the contribution of companies like Tata, Reliance and Godrej, and their collective contribution to income and growth in India. Corporate leadership must emerge to create unique propositions and value-generating businesses. Regions must be leveraged for their resources and location to create a differential advantage for the people and the firm.

To conclude, it is baseless to assume that competitiveness emanates from the most efficient or the largest. Competitiveness is a collective testimony to the efforts of various public and private players from the lowest levels to the highest. Productivity is making the most of available resources at every level, competing in the most economically intelligent manner. Every region is a cog in the national wheel, and poor productivity from one will slow down the nation in its race to become competitive globally.

The article was published with Outlook Business on May 29,2010.