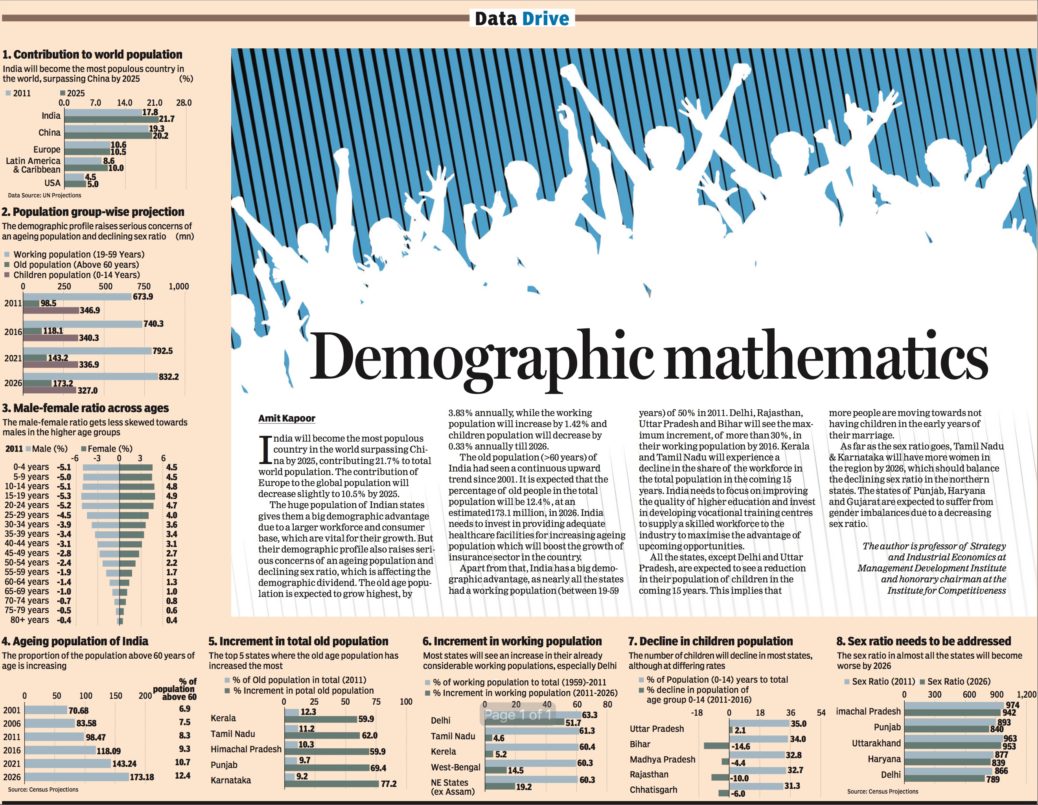 India will become the most populous country in the world surpassing China by 2025, contributing 21.7% to total world population. The contribution of Europe to the global population will decrease slightly to 10.5% by 2025.

The old population (>60 years) of India had seen a continuous upward trend since 2001. It is expected that the percentage of old people in the total population will be 12.4%, at an estimated173.1 million, in 2026. India needs to invest in providing adequate healthcare facilities for increasing ageing population which will boost the growth of insurance sector in the country.

Apart from that, India has a big demographic advantage, as nearly all the states had a working population (between 19-59 years) of 50% in 2011. Delhi, Rajasthan, Uttar Pradesh and Bihar will see the maximum increment, of more than 30%, in their working population by 2016. Kerala and Tamil Nadu will experience a decline in the share of the workforce in the total population in the coming 15 years. India needs to focus on improving the quality of higher education and invest in developing vocational training centres to supply a skilled workforce to the industry to maximise the advantage of upcoming opportunities.

All the states, except Delhi and Uttar Pradesh, are expected to see a reduction in their population of children in the coming 15 years. This implies that more people are moving towards not having children in the early years of their marriage.

As far as the sex ratio goes, Tamil Nadu & Karnataka will have more women in the region by 2026, which should balance the declining sex ratio in the northern states. The states of Punjab, Haryana and Gujarat are expected to suffer from gender imbalances due to a decreasing sex ratio.

The article was published with Financial Express on January 14, 2012.