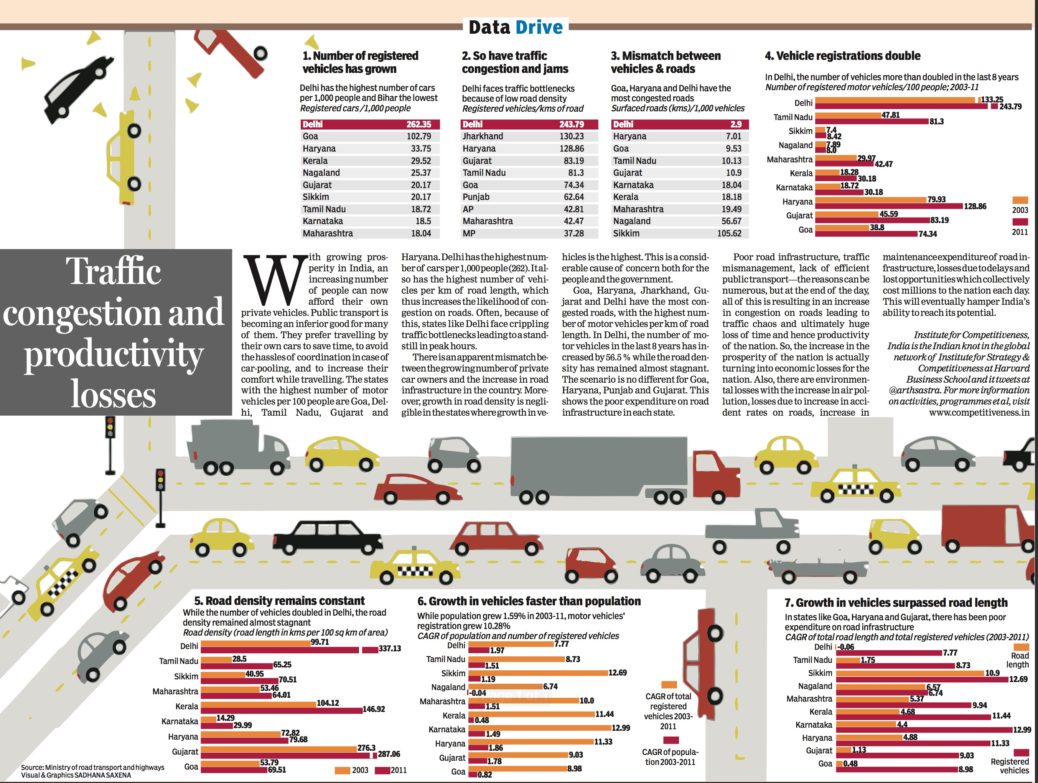 With growing prosperity in India, an increasing number of people can now afford their own private vehicles. Public transport is becoming an inferior good for many of them. They prefer travelling by their own cars to save time, to avoid the hassles of coordination in case of car-pooling, and to increase their comfort while travelling. The states with the highest number of motor vehicles per 100 people are Goa, Delhi, Tamil Nadu, Gujarat and Haryana. Delhi has the highest number of cars per 1,000 people (262). It also has the highest number of vehicles per km of road length, which thus increases the likelihood of congestion on roads. Often, because of this, states like Delhi face crippling traffic bottlenecks leading to a standstill in peak hours.

There is an apparent mismatch between the growing number of private car owners and the increase in road infrastructure in the country. Moreover, growth in road density is negligible in the states where growth in vehicles is the highest. This is a considerable cause of concern both for the people and the government.

Goa, Haryana, Jharkhand, Gujarat and Delhi have the most congested roads, with the highest number of motor vehicles per km of road length. In Delhi, the number of motor vehicles in the last 8 years has increased by 56.5 % while the road density has remained almost stagnant. The scenario is no different for Goa, Haryana, Punjab and Gujarat. This shows the poor expenditure on road infrastructure in each state.

Poor road infrastructure, traffic mismanagement, lack of efficient public transport—the reasons can be numerous, but at the end of the day, all of this is resulting in an increase in congestion on roads leading to traffic chaos and ultimately huge loss of time and hence productivity of the nation. So, the increase in the prosperity of the nation is actually turning into economic losses for the nation. Also, there are environmental losses with the increase in air pollution, losses due to increase in accident rates on roads, increase in maintenance expenditure of road infrastructure, losses due to delays and lost opportunities which collectively cost millions to the nation each day. This will eventually hamper India’s ability to reach its potential.

Article published with The Financial Express on October 27, 2012.