Demonetisation: It cannot be business as usual any more 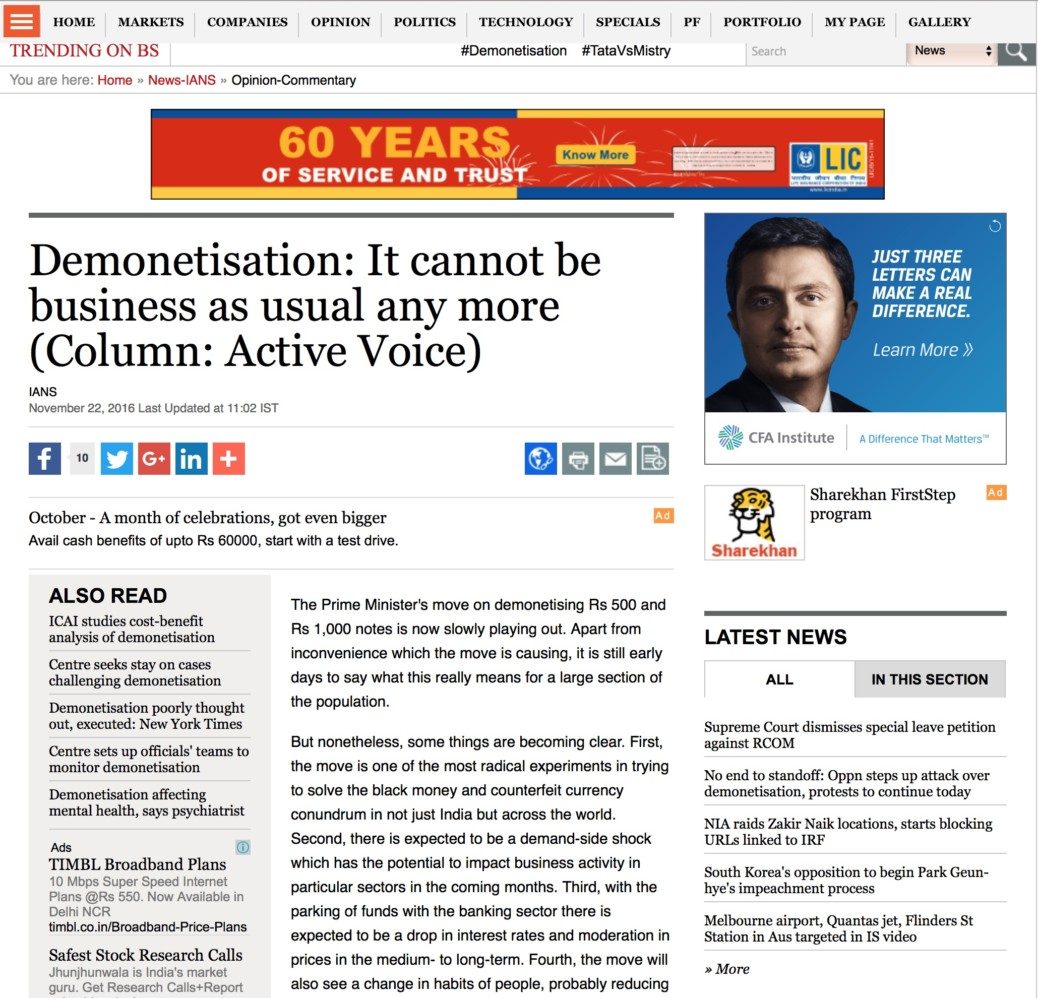 The Prime Minister’s move on demonetising Rs 500 and Rs 1,000 notes is now slowly playing out. Apart from inconvenience which the move is causing, it is still early days to say what this really means for a large section of the population.

But nonetheless, some things are becoming clear. First, the move is one of the most radical experiments in trying to solve the black money and counterfeit currency conundrum in not just India but across the world. Second, there is expected to be a demand-side shock which has the potential to impact business activity in particular sectors in the coming months. Third, with the parking of funds with the banking sector there is expected to be a drop in interest rates and moderation in prices in the medium- to long-term. Fourth, the move will also see a change in habits of people, probably reducing dependence on cash. Another change will be dependence on gold and housing as a stock of money. Finally, the move could have been done better and the inconvenience somewhat reduced.

The fact that it is one of the most unprecedented events is clear. The fact is no other country has tried this kind of radical demonetisation, especially when the economy was growing at more than seven per cent relatively consistently and inflation was in control.

The sectors of the economy which transact more in cash are expected to be the most impacted. These include supply chain and logistics, agricultural farm produce and, most of all, sectors like real estate where 60:40 is the norm. Apart from this, the consumer durables as well as FMCG sectors are expected to see a slowdown in consumption. This is expected to slow down growth in the economy with no money to buy goods and services in the short term.

Also, people are trying to get around the problem and sometimes transactions are also being done on the basis of trust/barter. However, if the banking system is not able to efficiently recalibrate the economy, the Supreme Court has noted there “could be riots”.

Already the people, post the announcement, have replaced a large stock of their cash. The Prime Minister quoted a figure of Rs 5 lakh crore of cash being deposited in banks which could be used to give loans to entrepreneurs and common people. The banks seeing incoming money are likely to cut interest rates. This is likely to have a positive impact on growth in the medium- to long-term. The impact of this needs to be greater than the demand-side shock for this gamble to pay off economically. Most economists are divided on this, but it likely seems to be a step in the right direction.

An interesting outcome will be the move of people to reduce dependence on cash. This is expected to bring more transactions into the formal economy and most likely increase the tax base. In India, roughly two per cent of the people file their tax returns. Tax evasion is thus a significant problem. So far, the transitioning from cash to a cashless economy was incremental in nature but in the coming months this is expected to increase exponentially.

India’s perennial problem seems to be implementation. This was on full display in this case as well. The secrecy argument is a genuine one but still the inconvenience could have been reduced. The floating of Rs 5,000 or Rs 10,000 notes in the previous two years could have helped in moving cash to those notes and subsequently these could have been demonetised, reducing the large serpentine queues that we now see outside banks and ATMs.

With the unprecedented move, the Prime Minister has signalled one thing: A shake-up of the business as usual norm. It is a good first step, but more on the front of corruption needs to be done. This includes war on hawala, cleaning up funding of political parties, better tax administration and doing away with burdensome regulation which inhibits growth and a mentality to avoid compliance.

At the root of corruption is our penchant of not complying due to bad systemic design. If that can be addressed over the coming decade, the war on corruption can be won.

Published with Business Standard on November 22, 2016.