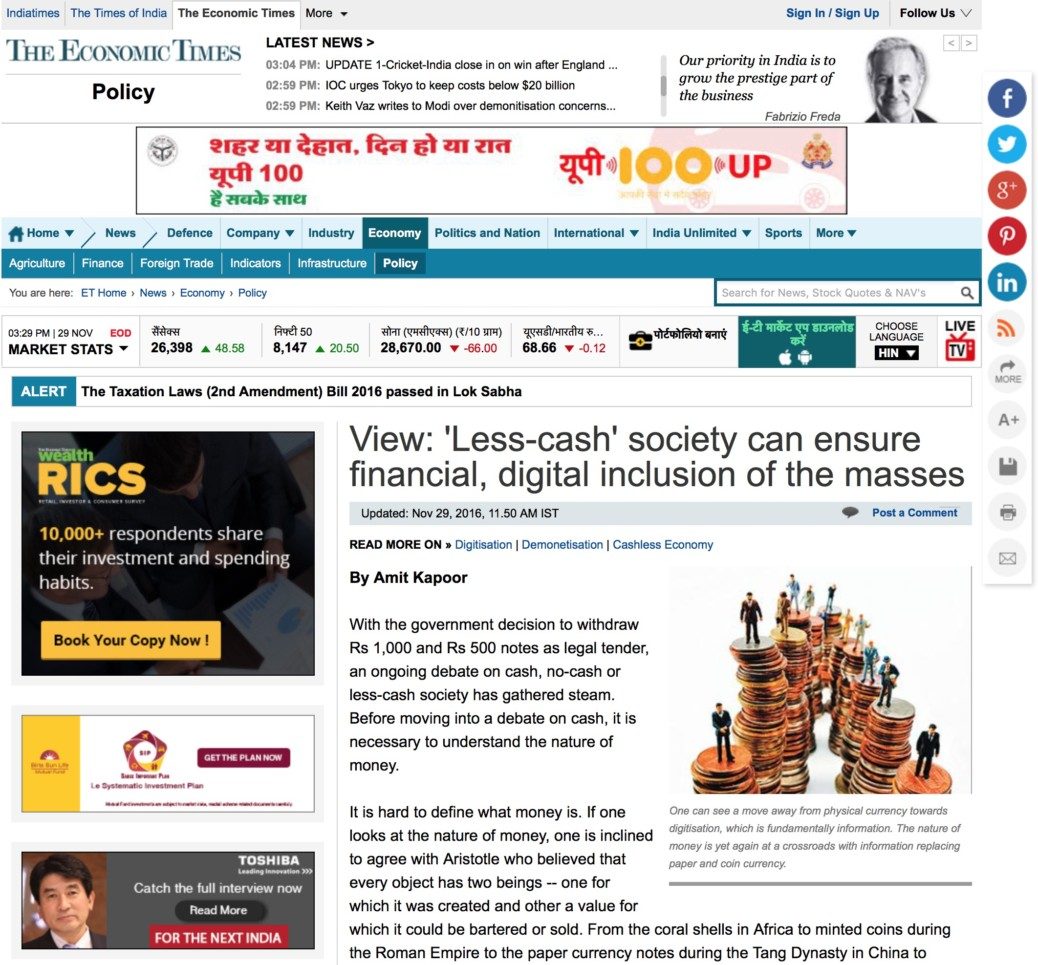 With the government decision to withdraw Rs 1,000 and Rs 500 notes as legal tender, an ongoing debate on cash, no-cash or less-cash society has gathered steam. Before moving into a debate on cash, it is necessary to understand the nature of money.

It is hard to define what money is. If one looks at the nature of money, one is inclined to agree with Aristotle who believed that every object has two beings — one for which it was created and other a value for which it could be bartered or sold. From the coral shells in Africa to minted coins during the Roman Empire to the paper currency notes during the Tang Dynasty in China to Stockholm Banco issuing the first notes in Europe in the late 17th-century, money/currency has undergone several changes but yet has remained the same. The rise of the central bank came next, and post that the innovation of charge cards, which later transformed into credit cards, debit cards and travel cards. After the 1990s, with digitisation, there is an interesting story that is unfolding around digital currency.

Before discussing the merits and demerits of cash-versus-digital, it is pertinent to note the function money serves. Money has primarily three functions, namely, as a store of wealth, as a unit of measurement, and as a medium of exchange. The first function can be served well by a physical asset as well — like gold or a piece of real estate — but the other two functions of money — as a unit of measurement and as a medium of exchange — seem to be better conceived in terms of cash currency than physical objects/commodities. With respect to an exchange, this is especially acute since money also acquires a liquidity aspect. You cannot exchange land for money very quickly. Similarly, real estate and value of gold can change considerably with time and are dependent on cash. So cash has utility in being used as a meaningful means for transactions to take place between individuals who don’t know each other.

Despite these benefits, in recent times, cash’s utility has been questioned. In his recent book on cash titled ‘The Curse of Cash’, Harvard economist Kenneth Rogoff raises some fundamental concerns about cash in advance economies in general and the US 100 dollar bill. “Even as people in advanced economies use less paper money there is more cash in circulation,” he argues. A record $1.4 trillion, or $4,200 for every American, is circulating, mostly in $100 bills. He raises concern about this this excess cash being used for tax evasion, corruption, terrorism, the drug trade, human trafficking and the like of a massive global underground economy.

Another problem of cash in developed markets is of limiting possible monetary policy choices in a negative interest rate regime where people will stockpile more cash and abandon treasury bills. In the Indian context, too, these problems of cash hold true barring the last one as the interest rate situation is very different at present from what it is in developed countries

The fact that cash has limitations does not mean digital money is without its share of problems. A recent report by the Cambridge Security Initiative (CSI) authored by Alfred Rolington points out that threats posed on the digital currency are considerable. These include threats like criminal cyber theft, attacks on ATM machines and on electronic bank accounts. Another important point is digital money’s usage in the time of calamitous situations like a flood when electronic device usage may be disrupted.

Then there are aspects related to privacy that raise questions about governments and individual freedom in societies that are aiming to go cashless. Some countries, especially the Nordic countries like Sweden, have been tempted to go cashless. However, despite this, at present they do use paper money.

One can see a move away from physical currency towards digitisation, which is fundamentally information. The nature of money is yet again at a crossroads with information replacing paper and coin currency. It is a disruptive change similar to the move away from barter to commodity currency to fiat currency. The Utopian conception of a “cashless society” is still an idea whose time is yet to come.

Prime Minister Narendra Modi is right when he says that the move is towards a more ‘less-cash’ society rather than a complete “cashless” society. Even governments elsewhere are taking a hard look at where cash and digital currency fit the need of citizens to store and exchange goods and services in an economy. In that, the Indian government has taken a bold and hard step (critics say rather abruptly) and fundamentally shifted the balance towards “less-cash”, not more of it. Over the coming years it must think about making this “less-cash” society plug more leakages and bring in more financial and digital inclusion of the masses.

Published with Economic Times on November 29, 2016.