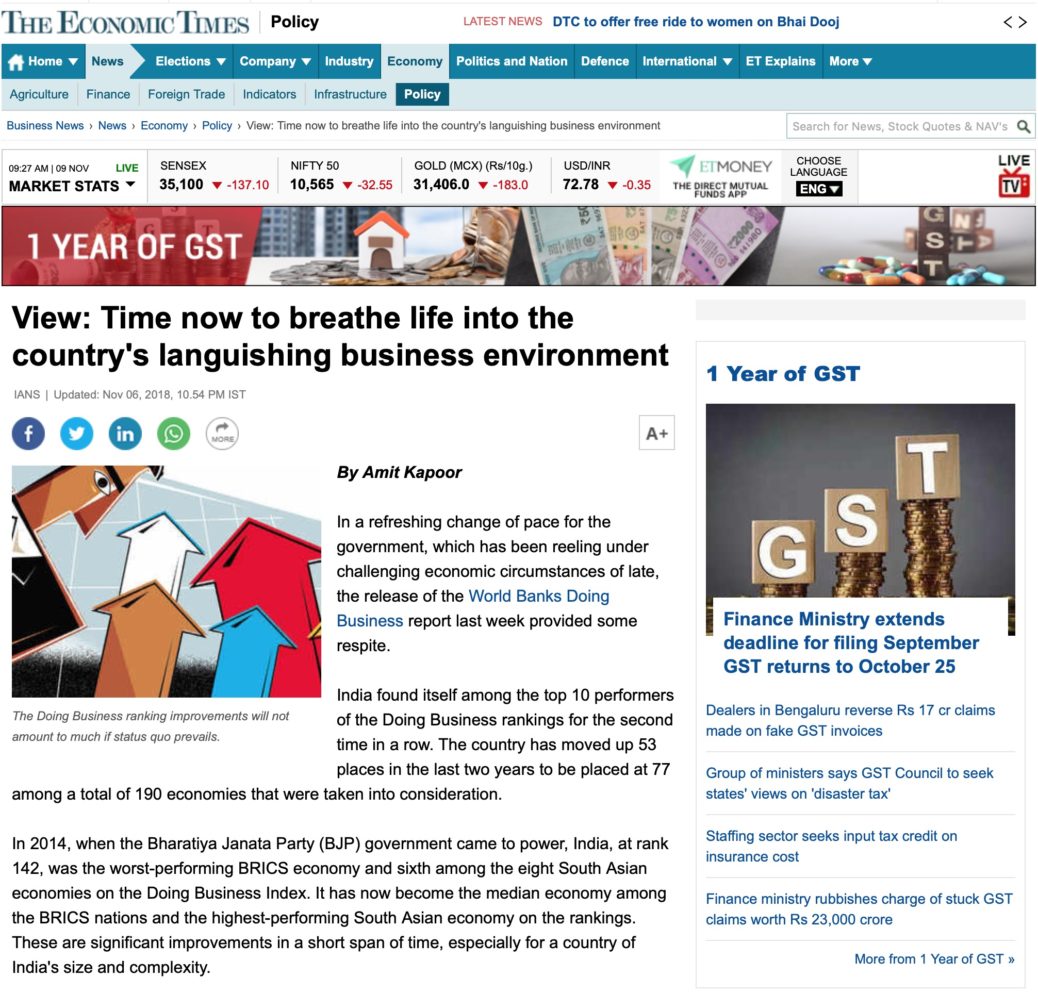 In a refreshing change of pace for the government, which has been reeling under challenging economic circumstances of late, the release of the World Bank’s Doing Business report last week provided some respite. India found itself among the top 10 performers of the Doing Business rankings for the second time in a row. The country has moved up 53 places in the last two years to be placed at 77 among a total of 190 economies that were taken into consideration.

In 2014 when the BJP government came into power, India at rank 142 was the worst-performing BRICS economy and sixth among the eight South Asian economies on the Doing Business index. It has now become the median economy among the BRICS nations and the highest-performing South Asian economy on the rankings. These are significant improvements in a short span of time, especially for a country with India’s size and complexity.

The Doing Business Index aims to assess countries around the globe on their business climate based on 10 broad categories, which are integral to starting, sustaining and winding down a business. The World Bank relies on four sources of information to determine these assessments: the rules and regulations of the country, experts well-versed with the local business environment, national governments, and the World Bank staff. For most major economies, the World Bank relies on two major cities for its data; Mumbai and Delhi for India. Such a narrow focus of survey has often been subject to a fair share of criticism.

Nevertheless, the Index is considered to be a vital barometer for the ease of conducting private business in the country by providing a sense of the extent of red tapism and administrative hurdles present in the economy. It proves to be a handy tool for investors who require a comparable template to make cross-border investment decisions. This explains the persistent efforts of the government to improve India’s performance on the rankings, which have been successful to a large extent.

India has improved on six of the ten parameters over the last year with the highest improvement coming in ‘Dealing with Construction Permits’ where the country has jumped 129 places to be placed at 52. This has been the result of persistent governmental efforts to clean up its notoriously corrupt land sector by improving transparency and streamlining procedures in obtaining a permit. As a result, the cost of completing all procedures to build a warehouse have been reduced from 23.2 percent of the warehouse value to merely 5.4 percent and the number of days to obtain the permit has fallen from 143.9 to 94.8.

Similarly, “Trading Across Borders” has become much easier with India witnessing a surge of 66 places to reach the 80th spot. Among other things, this has been the result of a slew of digital initiatives undertaken by the government that has eliminated inspection requirements for about 80 percent of the products. All of these improvements have been along expected lines owing to recent government efforts to this end.

But the unexpected occurred in the categories of “Paying Taxes” and “Resolving Insolvency”; two areas where the government has initiated landmark reforms. With respect to the former, India has slipped two places to 121, despite the implementation of the Goods and Services Tax (GST). Quite contrary to the intent of GST, the number of hours in a year taken to file taxes has inched up from 214 last year to 275.4. A possible explanation is that the World Bank has not been able to capture the entire benefit of India’s tax-related reforms as the data taken for the indicator was only incorporated until December 2017 when GST was merely six months old and the glitches in filing had not been ironed out.

On the other hand, as for “Resolving Insolvency”, India’s ranking declined by five places to settle at 108. This occurred despite the adoption of the Insolvency and Bankruptcy Code, which has started to show promising results on the ground. When the results of these reforms start showing up in the Doing Business data, India is bound to experience a further boost in its overall rankings.

All being said, it is necessary to not over-emphasise the importance of these rankings. The critics are right to point out that the scope of the index is fairly limited. By World Bank’s own admission, the indicators are not designed to portray the entire macroeconomic scenario of the country or its growth prospects. It mainly provides a snapshot of the prevalence of red tape in the economy. The government needs to be lauded for making concerted efforts to bring these down, but a larger part of the job still remains to be done.

The cost of doing business in India may have fallen, at least for the larger firms. But if higher investment is the end goal of these rankings, it is far from being accomplished. Over the last three years, investments in the country have stagnated. This is probably because investment is also driven by a host of other factors like capacity utilisation, bank willingness to lend and project viability; all of which are under severe strain in India right now.

India’s performance in the Doing Business rankings shows that focussed policy efforts can wield positive results for the economy. A similar intent needs to be shown to breathe life into the country’s languishing business environment. The ranking improvements will not amount to much if status quo prevails.