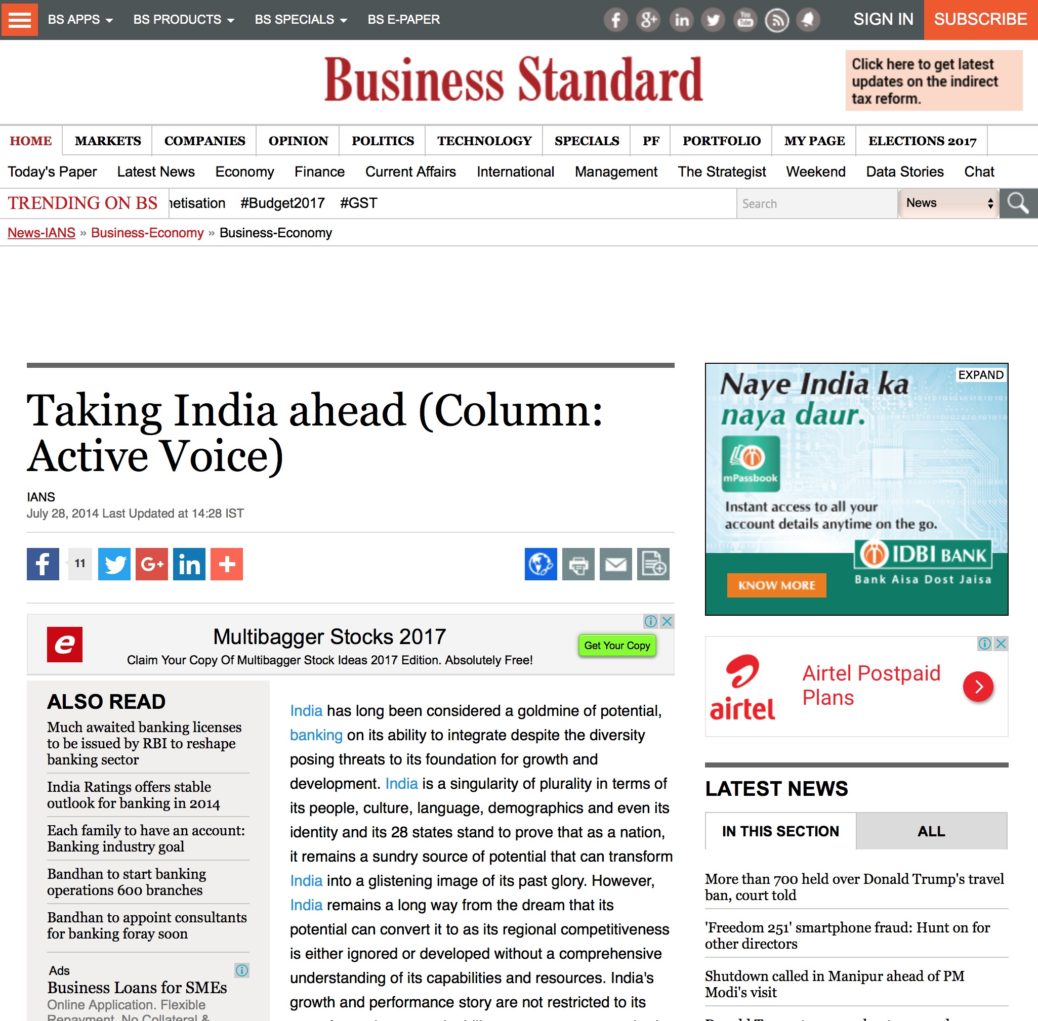 India has long been considered a goldmine of potential, banking on its ability to integrate despite the diversity posing threats to its foundation for growth and development. India is a singularity of plurality in terms of its people, culture, language, demographics and even its identity and its 28 states stand to prove that as a nation, it remains a sundry source of potential that can transform India into a glistening image of its past glory. However, India remains a long way from the dream that its potential can convert it to as its regional competitiveness is either ignored or developed without a comprehensive understanding of its capabilities and resources. India’s growth and performance story are not restricted to its rate of growth as sustainability targets are not matched and the society has become an amalgamation of unequal opportunities and indicators. Competency of a nation is a function of the performance of its regions and states and the development of the nation as a whole needs to be accepted as an amalgamation of its divergent competencies.

The perception of India outside the country is reflected by the excitement and the buzz about the Indian growth story. India is expected to be one of the largest economies in the near future and the recent election result has put much faith in the growth and development dreams harboured by India and the expectations of the world. However, a closer inspection of the Indian reality reveals huge levels of disparities in India that could put a stopper to these dreams from realising. India suffers from unequal growth and the different regions of the country cannot boast of the same levels basic development required for the potential economic superpower to grow.

While a few regions have come into the spot light of the international fraternity with their high standards of work and competitiveness though the challenges remain immense in certain others. Interstingly, the unequal development of regions is a manifestation of the inequitable income distribution in India at the individual and the regional level and it poses a grave danger to the foundation that is required for the country to grow as a whole.

The competitiveness gap between these states would only increase as only a few would be able to develop, in the short term,  the industry and the infrastructure to support growth and development. A major part of the nation would remain in the backdrop leaving a gaping hole in the dreams of Indian growth and development. Development of India has to be an encompassing process lest it forestalls all progress of regions.

The Indian federal structure enables the governments to summate the policy measures from the lowest levels to result in higher efficiency and effectiveness of the policies at the state and eventually the central levels. The state governments need to understand their potential and undertake decisions that would create an avenue for the state as an entity rather than a part of a country. There are a select few places which attract the FDI that has been creating a buzz for the growth of India as a whole. A major part of the investments are routed to these select few locations that have become the representatives of the Indian growth story while a significant part of the country remains in the shadows of its past.

India is an amalgamation of resources and competencies and the investments from the government and businesses need to be sieved through the lens of the regional capabilities. Each state in India is a separate avenue for an industry and an element in the race for competitiveness and the onus of recognising this opening remains with the administration closest to each region. India has to recognise the power of summation: its 29 platforms to build a nation unified in its pursuit of development and welfare.

The groundwork exists but the implementation is lacking. Every state needs to understand its potential and undertake policy measures at their level. Each state requires an in depth study of its growth opportunities and the sources from where a competitive advantage can be derived. Nevertheless, India is the buzz word in international arena and certain hard policy measures can enable India to realize these expectations.

Published with Business Standard on July 28, 2014.