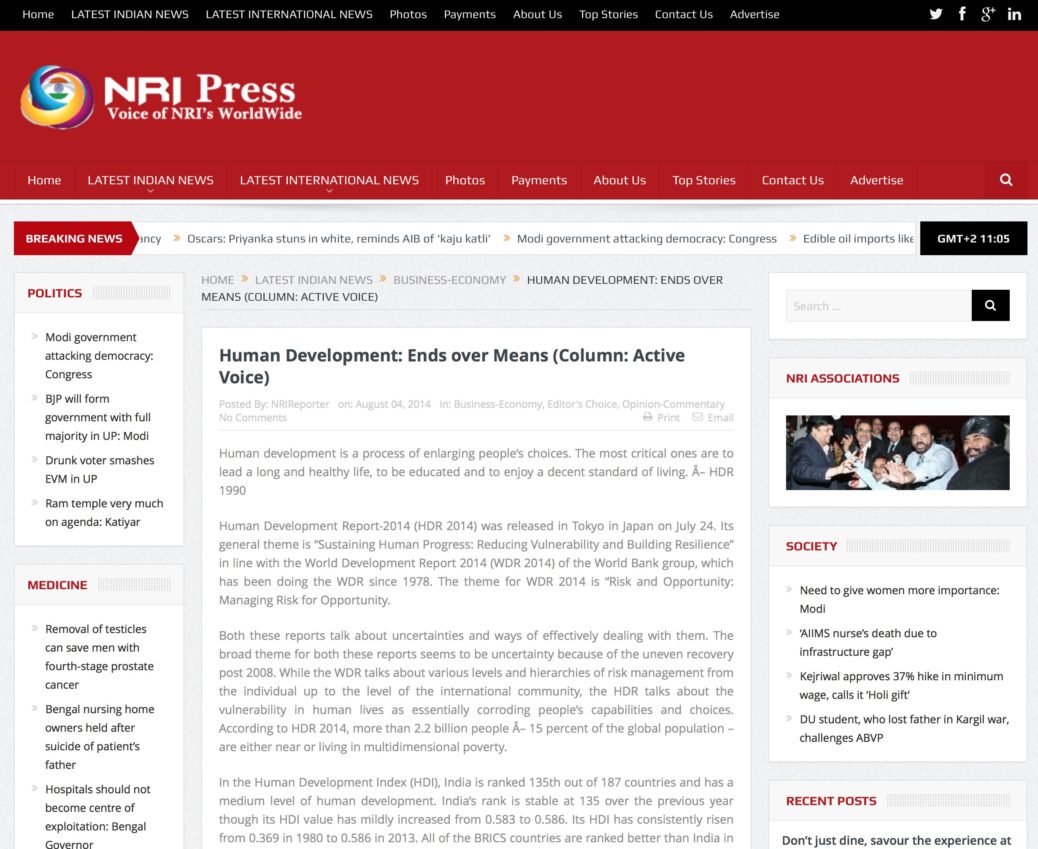 Human development is a process of enlarging people’s choices. The most critical ones are to lead a long and healthy life, to be educated and to enjoy a decent standard of living. – HDR 1990

HDR 2014 was released in Tokyo in Japan, on 24 July 2014. The report’s general theme is ‘Sustaining Human Progress: Reducing Vulnerability and Building Resilience.’ The general theme is also in line with the World Development Report 2014 (WDR 2014) of the World Bank group, which has been doing the WDR since 1978. The theme for WDR 2014 was Risk and Opportunity: managing risk for opportunity.

Both these reports talk about uncertainties and ways of effectively dealing with them. The broad theme for both these reports seems to be uncertainty because of the uneven recovery post 2008. While the WDR talks about various levels and hierarchies of risk management from the individual up to the level of the international community the HDR talks about the vulnerability in human lives as essentially corroding people’s capabilities and choices. According to HDR 2014 more than 2.2 billion people are either near or living in multidimensional poverty. It is more than 15 % of the world’s population being vulnerable to poverty.

On the HDI, India is ranked 135th out of a total of 187 countries and has a medium level of human development. India’s rank is stable at 135 over the previous year though its HDI value has mildly increased from 0.583 to 0.586. Its HDI has consistently risen from 0.369 in 1980 to 0.586 in 2013. All of the BRICS countries are ranked better than India in HDR 2014. Brazil (Ranked 79); Russia (Ranked 57), China (Ranked 91), and South Africa (Ranked 118). Out of the BRICS only India and South Africa fall in the medium human development category while Brazil, Russia and China fall in the high human development category.

In 1990, the first Human Development Report was launched with these lines written in the foreword “We live in stirring times. An irresistible wave of human freedom is sweeping across many lands.” The report was particularly interesting because it sought to challenge the view that people can be reduced to a single dimension as economic creatures which were till then measured by National Income Accounting System (NIAS). The NIAS system’s principal architect was Simon Kuznets, who began work on the United States’ income accounting in 1932. In 1953, the United Nations published “A System of Statistical Tables” that gave details for construction of National Accounts. These tables were used till the 1990’s for keeping accounts but since 1990’s, GDP has replaced GNP as the measure of national income. GNP or GDP had several problems in being used as a measure of well-being most notable being its treatment of natural resources as being infinite and GDP/GNP’s ignorance in discussing the problem of distribution of income within a society. The purpose of the first Human Development Report was thus to put back the focus of development where it actually should have been, i.e., on people. The report viewed the purpose of development as primarily offering people more choices and thus increasing their freedoms rather than just increasing their incomes.

Human development is a fascinating topic for development economists. Human development as a field went through a radical transformation with Amartya Sen in 1985 coming up with the ‘human capabilities approach’ which talked about the precedence of ends (Better quality of life) over means (GDP per capita) in human life to determine well-being. The next question was measurement of these key capabilities which determine well being. Measurement was by a way of proxies for three ends of development, i.e., access to health, education, and a basic standard of living which could in effect be used to conceptualize development. Access to health was measured by taking into account life expectancy, Access to education was measured by taking into account literacy, and school enrollments and standard of living was measured taking into account the GDP per capita of a nation.

Initially, Sen did not see the purpose in constructing a composite index. But Haq is said to have replied to him “We need a measure of the same level of vulgarity as GNP – just one number – but a measure that is not as blind to social aspects of human lives as GNP is.” And thus was born the Human Development Index (HDI) which is so often used to describe development levels of a country and even within a country. Over the years, the methodology of the report have undergone mild changes but overall the broad contours of the report remain the same. HDI is  criticized on several accounts most notable of them being on it using poor data which at times is unreliable, using few indicators to reflect human development, and sometimes it explaining just what GDP/capita explains. However with all its shortcomings it has been able to bring back the focus of development away from GDP and back on people.

The Future of Human Development:

The crucial point that should be kept in mind while discussing the present report is the way forward in all spheres of human lives which are reflected in the progress made so far on UN’s Millenium development goals (MDG’s). Development post 2015 will focus on several sustainable development goals which are similar to MDG’s, talks on which are already underway. Hopefully progress on these will lead to enhancing human freedoms which will in turn lead to better human development for most nations in the years post-2015.