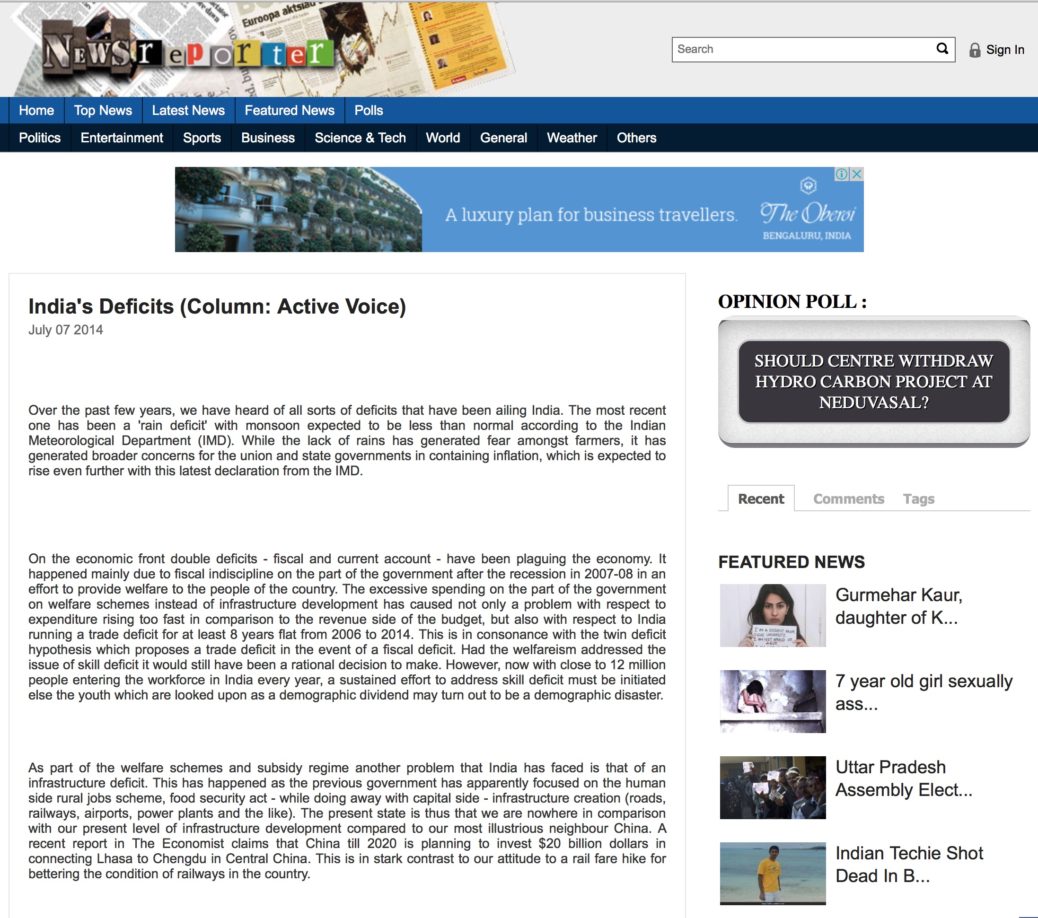 Over the past few years we have heard all sorts of deficits, which have been ailing India. The most recent one has been a ‘rain deficit’ with monsoon expected to be less than normal according to Indian Meteorological Department (IMD). While lack of rains has generated fear amongst farmers, it has generated broader concerns for the Union and State governments in the containment of inflation that is expected to rise even further with this latest declaration from the IMD.

On the economic front the double deficits[1] namely fiscal and current account deficit have been plaguing the economy. It happened mainly due to fiscal indiscipline on the part of the government after the recession in 2007-08 in an effort to provide welfare to the people of the country. The excessive spending on the part of the government on welfare schemes instead of infrastructure development has caused not only a problem with respect to expenditures rising too fast in comparison to the revenue side of the budget, but also with respect to India running a trade deficit for at least 8 years flat, i.e., from 2006-2014. This is in consonance with the twin deficit hypothesis which proposes a trade deficit in the event of fiscal deficit in the economy. Had the welfarism addressed the issue of skill deficit it would still have been a rational decision to make. However,  now with close to 12 million people entering the workforce in India every year a sustained effort to addressing skill deficit must be initiated else the youth which are looked upon as a demographic dividend may turn out to be a demographic disaster.

As part of the welfare schemes and subsidy regime another problem that India has faced is that of an Infrastructure deficit. This has happened as the previous government has ‘apparently’ focussed on the ‘human side’ – MNREGA, FSA while doing away with ‘capital side,’, i.e., infrastructure creation (roads, railways, airports, power plants for something as basic as power supply), etc. The present state is thus that we are nowhere in comparison with our present level of infrastructure development compared to our most illustrious neighbour China. A recent report in The Economist[2] claims that China till 2020 is planning to invest 20 billion dollars in connecting Lhasa to Chengdu in Central China. This is in stark contrast to our attitude to a rail fare hike for bettering the condition of railways in the country.

This also brings us to the matter that cannot be addressed / tackled immediately, i.e., a deficit in our security concerns. While formulating foreign policy as well as dealing with our neighbours, we must pursue economic diplomacy. The calling in of all the leaders of the SAARC was a necessary and welcome first step in addressing our soft foreign policy. While protecting our borders, we must secure peace and prosperity through continued engagement with our neighbours. The internal security is also an issue with approximately 173[3] districts being affected directly or indirectly by left-wing extremism in 2013.

Another deficit is an administrative deficit which brings to the fore an important and relevant issue of bureaucratic corruption and grease payments in India. It has costs that result in business fleeing the country for the lack of transparency. It is caused primarily due to a paradigm of authority without responsibility. This also arises partly due to overregulation and a complex regulatory framework which has wreaked havoc on the state of the economy. At present the regulatory regime has grown like a hydra with as many as 36[4] regulators in India.

While it may be warranted what we require is not more laws but better implementation. This implementation deficit overtime forms the basis of the governance deficit which we face due to overregulation in some sectors and a gamut of rules to deal with in administrative functions. The infrastructure sector has seen a stalling of many projects due to problems in inter-ministerial coordination and lack of clear decision-making that have caused the country to increase its massive infrastructure deficit. The government should ideally have cleared the projects with appropriate resolution mechanisms between various ministries to facilitate infrastructure development in the country.

The final set of deficits that have resulted in the present state of affairs are the related trust and moral deficit. These are difficult to quantify but nonetheless these are pervasive and well known to everybody. The trust deficit has arisen due to corruption scandals in public life and is associated with people having a cynical attitude towards any activity done in good faith in public life. The moral deficit is with all the people with degraded levels of morals in our society.

Addressing all the above deficits will start with addressing the fundamental moral deficit that we as a people and society face. One must keep in mind that the government that a society gets is finally as good or bad as a society in which it functions. If a politician is corrupt, it represents a greater malaise of people in the society being corrupt. Afterall, the tip of the iceberg cannot be broader than the base.