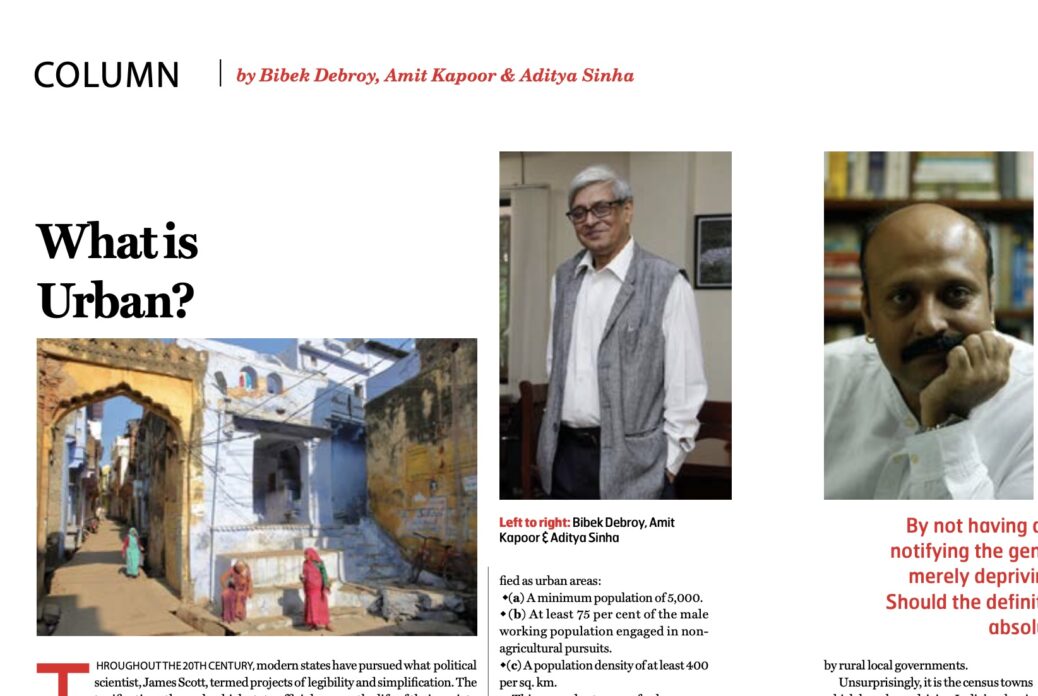 Throughout the 20th century, modern states have pursued what political scientist, James Scott, termed projects of legibility and simplification. The typifications through which the state officials assess the life of their society are a bit distanced from abstract reality. In his popular work, ‘Seeing like a State’, James Scott explains: “These typifications are indispensable to statecraft. State simplifications such as maps, censuses, cadastral lists, and standard units of measurement represent techniques for grasping a large and complex reality; in order for officials to be able to comprehend aspects of the ensemble, that complex reality must be reduced to schematic categories. The only way to accomplish this is to reduce an infinite array of detail to a set of categories that will facilitate summary descriptions, comparisons, and aggregation.”

Censuses, cadastral maps, uniform naming conventions, definitions etc. emanate out of these simplifications. While these simplifications make it easier for officials to govern, they mask complex realities. The official definition of “urban” in India is no exception. There are two ways in which a particular area can be classified as urban area. (1) All places with a municipality, corporation, cantonment board or notified town area committee, etc. This kind of urban area is also called a statutory town. Thus, there is a proper apparatus of governance in this town, or at least one is aware that there is a body which has to take care of urban governance.

(2) All other places which fulfil the following three conditions are also classified as urban areas: (a) A minimum population of 5,000. (b)At least 75% of the male working population engaged in non-agricultural pursuits. (c) A population density of at least 400 per sq. km. These (2) urban areas are classified as census towns. Census towns are also urban agglomerations but they have not been notified by the state governments as notified towns. Thus, a census town might be as big as a city, but unless is notified as a statutory town, there is no proper urban local governance structure. The governance structure in these census towns are either non-existent or rural. Similarly, important issues which figure in the state list of the seventh schedule, such as public health and sanitation, drainage, water etc. are also non-existent. While the physical territory takes an urban shape, the basic infrastructure remains exceptionally poor. In most of the cases, these areas are governed by rural local governments.

Unsurprisingly, it is the census towns which have been driving India’s urbanisation. The number of towns in India has increased to 7,935 in the 2011 census as compared to 5,161 in 2001. The majority of this increase has been attributed to census towns.  Amusingly, the definition of census town was first framed in 1961 by then census commissioner Asok Mitra and was revised slightly in 1991.

Classification of villages or census towns into statutory towns is a big task in itself. For instance, in 2020, the Government of Goa, rolled back the notification reclassifying 56 villages as there was a backlash from opposition parties as well as residents of the ‘villages’. As discussed in our last article, often level of urbanisation is correlated with the level of development. Despite that, there is an affinity to remain rural, as it comes with access to several rural development schemes.

A lot of the census towns are at the outskirts or around cities, peri-urban and even rural areas. This brings us to the narrowing rural-urban divide in India. By not having a proper definition of urban, or not notifying the genuinely urban areas as urban, we are merely depriving the residents of basic facilities. Should the definition of urban be only concerned with absolute population numbers? RBI for the purposes of banking also has a classifies ‘centres’ on the basis of population. According to RBI, “a Centre is defined as the revenue unit (and not just the locality) classified and delineated by the respective State Government”.

A study done by Hiranandani, Kapoor & Tandel (2016) (https://bit.ly/3O87s8J) finds that India is only 31% urban by the definition of the census. However, if one classifies any area with more than 5,000 people as urban, then 46% of India would be urban. Similarly, a habitation with more than 2,500 individuals would have been classified as urban, 65% of India would have been urban.

Thus, there is a need for an all-encompassing definition which takes into account the complex realities. At the same time, village-level local bodies are not equipped to cater to the needs of census towns with population as big as 10,00 people. Thus, before the next census, the government should come up with such a definition.

The article was published with Business World on June 24, 2022.