What makes an area Urban? 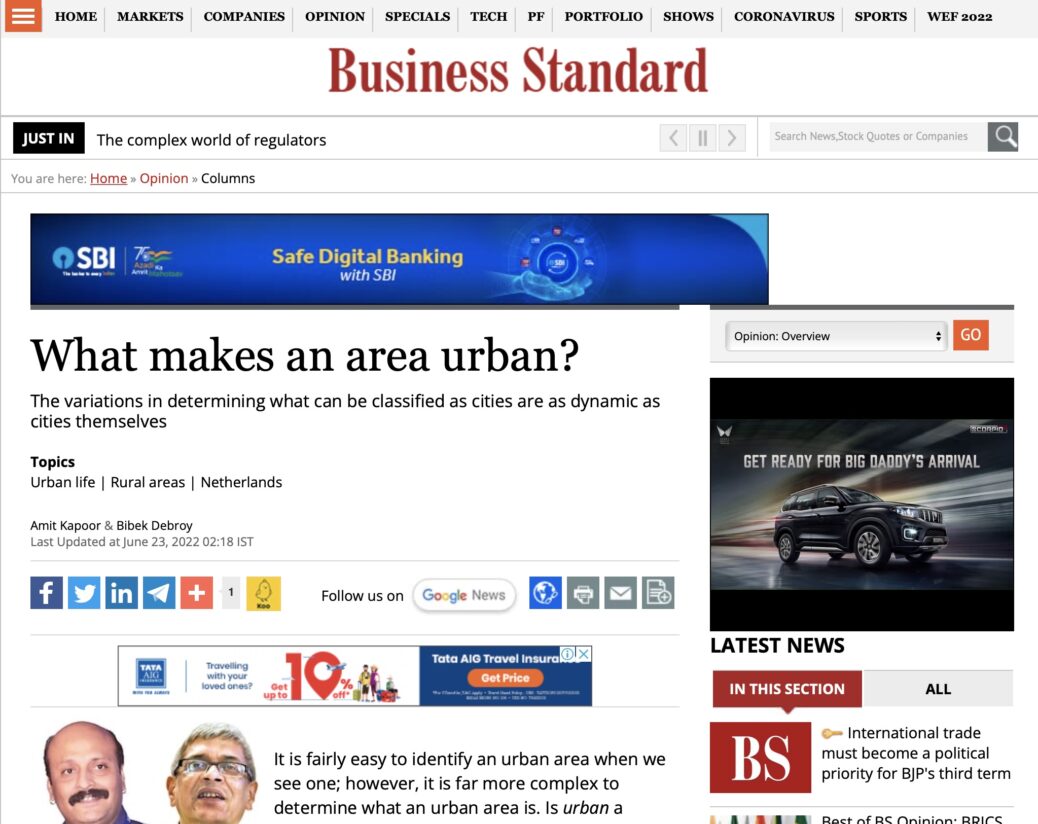 It is fairly easy to identify an urban area when we see one; however, it is far more complex to determine what an urban area is. Is urban a characteristic of a place or its people? Is it only based on factors like population size, land surface, primary occupation and level of development? Does the ‘urban’ have a culture of its own? While an urban area is a function of all these metrics, the definitional ambiguity remains a complex task. It is not only necessary to define ‘urban’ in order to understand urbanisation but also to understand the rural-urban divide. This is all the more important in the context of in-situ urbanisation, where non-agricultural opportunities are promoted in rural areas, and economic linkages are strengthened.

With almost 55% of the population living in cities now and nearly 70% projected to be living in cities by 2050, the attention toward understanding urban settings has never been more glaring. Accompanied with population growth, demographic transition and technological advances, the multi-faceted setting that makeup cities have acquired deep academic interests. The rapid rise of cities in developed economies dates back to 200 years, although it is much more recent in developing economies. It is, in fact, in the latter that urbanisation, which includes the creation of megacities, has been the most remarkable, and the prospects for future urban development are bright. The allure of cities is so strong that several governments in developing nations have encouraged projects to bring urban facilities to traditionally agricultural communities.

Searching for a precise definition of ‘urban’ also emphasises the lack of a dichotomy between the rural and urban. The lines between rural and urban spaces are not as clear as one might think, thereby urging for a definition. For instance, in the 19th and early 20th century United States, a rural area would have been classified as urban if the streets were laid out in a grid. Such clear transitions are hard to find today. Besides, living in rural areas does not mean exclusion from urban life. Processes of integrative development have meant that rural and urban have become a part of a continuum than a dichotomy. Among the Scandinavian countries, rural and urban spaces are classified on the basis of each other – for example, population density and distance from urban centres are seen as the criteria to define rural areas. In Denmark, which has close to 88% of the population living in cities, there are three classes of rural areas with distinctions between urban-adjacent, intermediate and remote rural areas and a further classification system that compiles the socio-economic profiles of its municipalities.

The Census of 2011 revealed a decline in India’s rural population for the first time. Cities like Bengaluru that have emerged as innovation hubs have grown between 2001 and 2011, subsuming many non-urban areas. This is only expected to grow with the next Census. According to the census definition, a habitation is classified as urban (excluding municipalities, corporations, cantonment boards, and notified town area committees) if it has a population of at least 5,000 people, at least 75% of the male working population is employed in non-agricultural pursuits, and the population density is at least 400 people per square kilometre. These are also called as Census Towns. The 73rd and 74th Constitutional Amendments also enshrine a categorisation of the district, intermediate level, and village, as well as the creation of municipalities. As per the 74th Amendment Act (1992), three types of municipalities are defined as – Nagar Panchayat for transitional areas (rural to urban), Municipal Council for smaller urban areas and Municipal Corporation for larger urban areas. The demographic and other criteria determining which sort of municipality is formed vary greatly from state to state. As a result, it is up to the state legislatures to select which municipality will be formed for each urban area.

The variations in determining what can be classified as cities are as dynamic as cities themselves. An urban area’s distinguishing characteristics are tied to its strategic role in the larger community, its value as a civilising force, and its role in enabling the market. However, this does not limit the potential of urban areas, especially in more developed countries where improved mobility has allowed urban inhabitants to live outside the city. The fact that urban population growth happens outside the continually built-up region is commonly acknowledged in various census definitions. The growth of the functional urban region has meant that only the most geographically isolated locations are outside the impact of a metropolis in the more heavily urbanised advanced economies — for example, the Netherlands and the United Kingdom. This aspect of urbanisation not only produces demographic transitions but also alters the relationship of populations with their environment. Settling in urban spaces triggers an image of cemented buildings towering high in the sky as if they were to pierce it. In contrast, rural life is seen as akin to little houses on a prairie. While this does not hold true anymore, it colours our perception of the “urban”.

The article was published with Business Standard on June 23, 2022.