States as magnets for investment 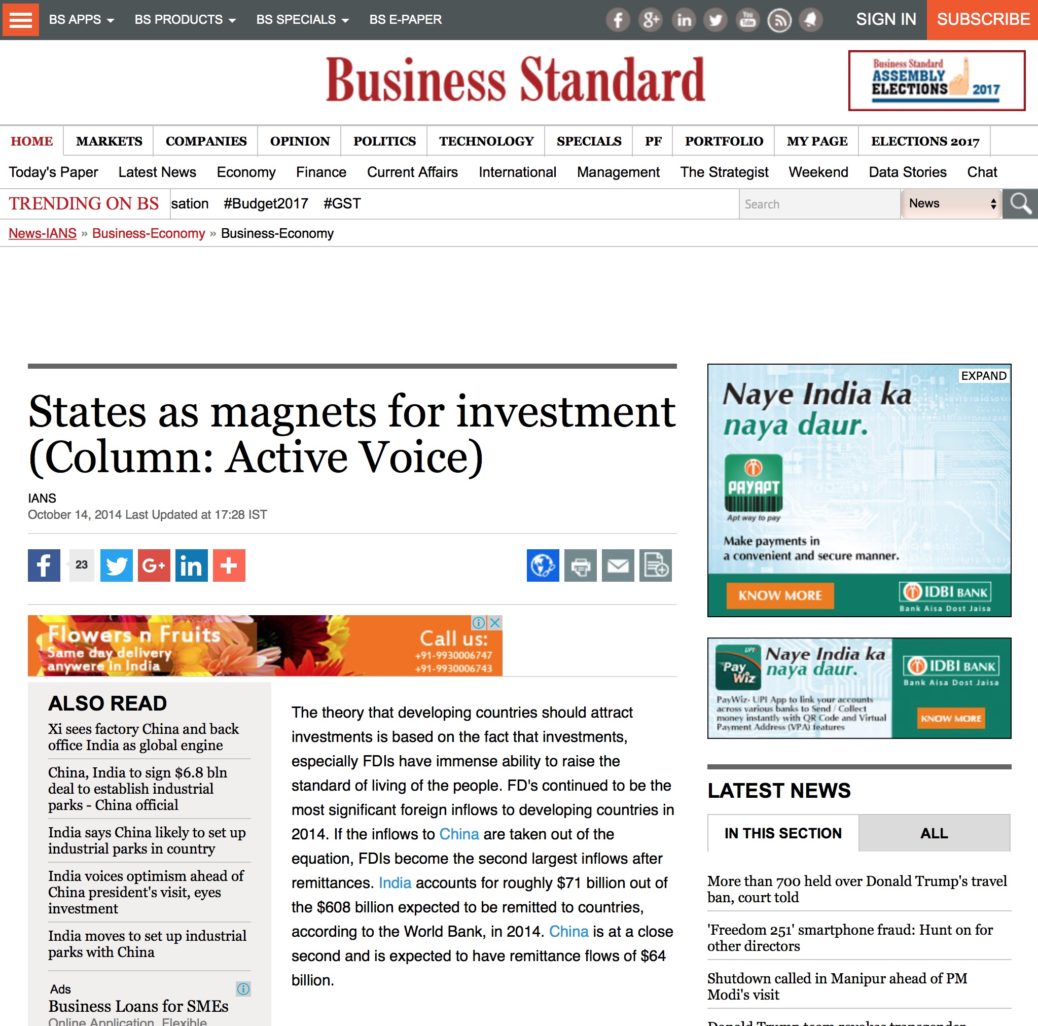 If data from OECD is looked at, one sees that China had FDI inflows of 253 Billion USD compared to India’s 24 Billion, Russia’s 30 Billion and Brazil’s 65 Billion in 2012. One can easily see that China amounts to an enormous amount of FDI inflows globally amounting to roughly ten times that of India in a single year. In fact, the total FDI inflows to India from abroad from April 2000 to July 2014 accounted to 339 Billion USD according to the Department of Industrial Policy and Promotion (DIPP). It is lesser than the investment that China received in just 2011 and 2012 if one looks at the figures of OECD.

What do these figures point to? It brings us to an interesting point of economic diplomacy that PM Modi is engaged in / wants to engage India into. The recent investment pledges of a little over 33 Billion USD by Japan and then a subsequent pledge of 20 Billion USD by China are ways to leverage the strategic investment that India desperately needs at this juncture for its ailing infrastructure and expanding its manufacturing capability. Apart from this, the US and India have also planned to boost two-way trade to $500 billion from $100 billion at present, without setting a deadline for reaching that goal. It is again with a view to boosting trade and competitiveness of both India and US that is critical for economic growth and development.

If one looks closely at the FDI statistics of DIPP and RBI, the centers that have attracted the maximum FDI’s in the past 14 years (April 2000-July 2014) from abroad include the Mumbai (30%), New Delhi (19%), Chennai (6%), Bangalore (6%) and Ahmedabad (4%). Also, pertinent to note is the fact that the investments have been maximum in services sectors (USD 40 Billion) and in construction development (USD 23 Billion). These two sectors alone accounted for a little over 28 % of the total of investments of 338 billion to India during the commensurate period.

Part of the PM’s plan also seems to be to draw in states and make them partners in development. The PM’s address at the recent Global Investors’ Summit at Indore on October 9, spoke about the team of PM of India and CM’s of various states working in collaboration to facilitate investment. The PM also talked about the fact that the center and the states are not competing entities but should work in tandem to build India. The PM also alluded to the opportunity that awaits willing states. An opportunity worth 100 billion USD that is lined up for states who are willing to provide investors with the business environment needed to transform not just their own states but India as a whole.

What was noteworthy is that the PM said he wanted to build his team without taking into consideration the political affiliation of the CM concerned. In this regard if the states’ and the center can collaborate and cooperate, it will indeed be a combination of one plus one equaling eleven rather than two, which the PM alluded to in his address, required for building a strong and prosperous India.

Another positive which came out of the Global Investors Summit at Indore was the state envisioning exercise (which we have been advocating for quite some time now) that mentions the vision for Madhya Pradesh for 2018. Personally speaking we would have wanted the date to be extended a bit but the fact that somebody has undertaken the exercise provides us with hope that other states too might take it up in the future. The envisioning exercise not only allows a state to have a strategic view of what it wants to do in the future but also enables the investors to have a clear understanding of what the policies of the state are at present and what they are likely going to be in the future. It makes policy much more stable and transparent in the eyes of the investors and also provides a clear roadmap to businesses willing to enter a location. It also helps businesses think about policy priorities of the state and lets strategize make a location decision accordingly.

The way ahead for India is collaboration between states and center and a spirit of healthy competition between states for attracting investments to their particular regional centers. Apart from that the second big challenge would be to get states with a politically rival affiliation to become a partner in the development process.  The rival affiliation states’ willing to proactively participate or not may very well determine the fate of the India in the years to come.

Published in Business Standard on October 14, 2014.