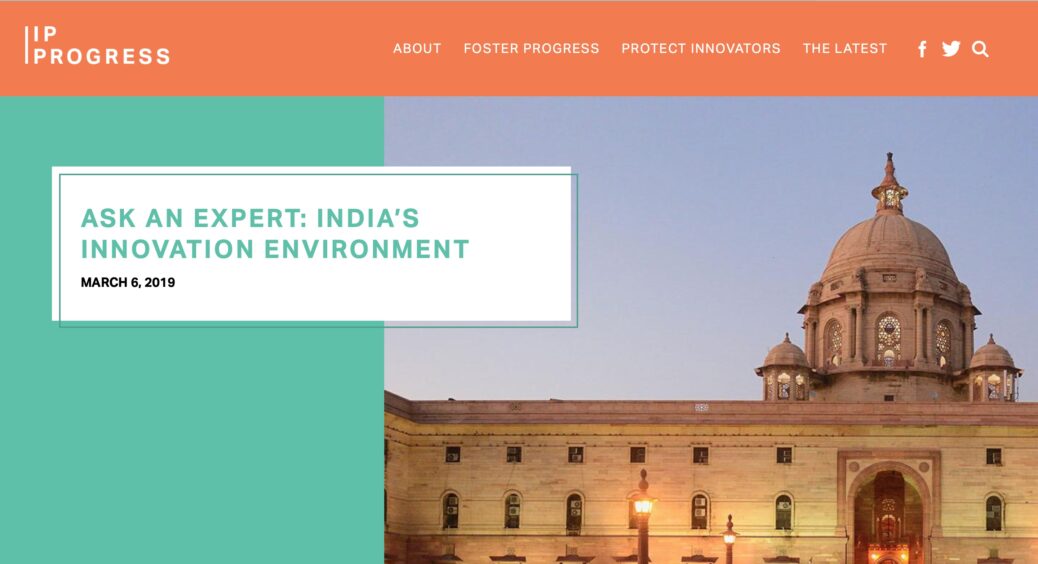 This is the first installment of the IP Progress “Ask an Expert” series, highlighting the state of innovation and intellectual property in specific markets around the world through insights from our partner organizations.

IP Progress interviewed Dr. Amit Kapoor, Honorary Chairman of the Institute for Competitiveness (IFC), an Indian think tank dedicated to enhancing the body of research and knowledge on competition and strategy. Speaking from decades of experience in competitiveness, business strategy and economics, Dr. Kapoor underscored the importance of intellectual property (IP) and innovation for India’s economic development. He then highlighted how the current environment can be more conducive for innovation and discussed how the Indian government could better promote entrepreneurship and progress.

To start, Dr. Kapoor gave a high-level analysis of India’s innovation ecosystem. He characterized innovation in India as “incremental, but not disruptive,” and expressed the notion that many ideas from other countries are simply replicated in India and given a new name, such as Amazon vis-à-vis India’s Flipkart. Innovation is heavily concentrated in a handful of major cities – such as Bangalore, Mumbai and New Delhi – and the effects elsewhere are often limited.

But Dr. Kapoor anticipates change on the horizon. He emphasized that an innovation transition is underway in India, in which both policy makers and society as a whole are placing a greater and growing emphasis on entrepreneurship and progress, particularly with regard to economic development.

“India’s government should keep the momentum going on innovative capacity building and needs to establish deeper trust in the innovation ecosystem.” – Professor Amit Kapoor, Honorary Chairman of the Institute for Competitiveness

To drive this change, Dr. Kapoor outlined “four things that matter for innovation”:

Dr. Kapoor acknowledged that just progressing towards these four high-level goals might not be enough to harvest the full potential of India’s innovators. He pointed to a number of more granular, but equally impactful barriers to innovation – including the high cost of education, expensive regulatory hurdles for enterprises, a time-consuming legal system that can take a number of years to resolve IP issues, and issues pertaining to compulsory licensing. On compulsory licensing, specifically, Dr. Kapoor stated, “The industry is of the view that the rules how government could use a compulsory license are not well articulated. The government should establish the trust in the industry that the use of compulsory licenses will be transparent and predictable.”

With one of the world’s largest populations, India’s full potential for innovation is seemingly limitless. While an innovation transition is underway, India’s government is at a fork in the road—IP protections and positive incentives on one side, and barriers to progress on the other. Dr. Kapoor’s and Institute for Competitiveness insights provide a potential roadmap for India to gain forward momentum.

The interview was published with IP Progresson March 11, 2019.