Building cities with no souls 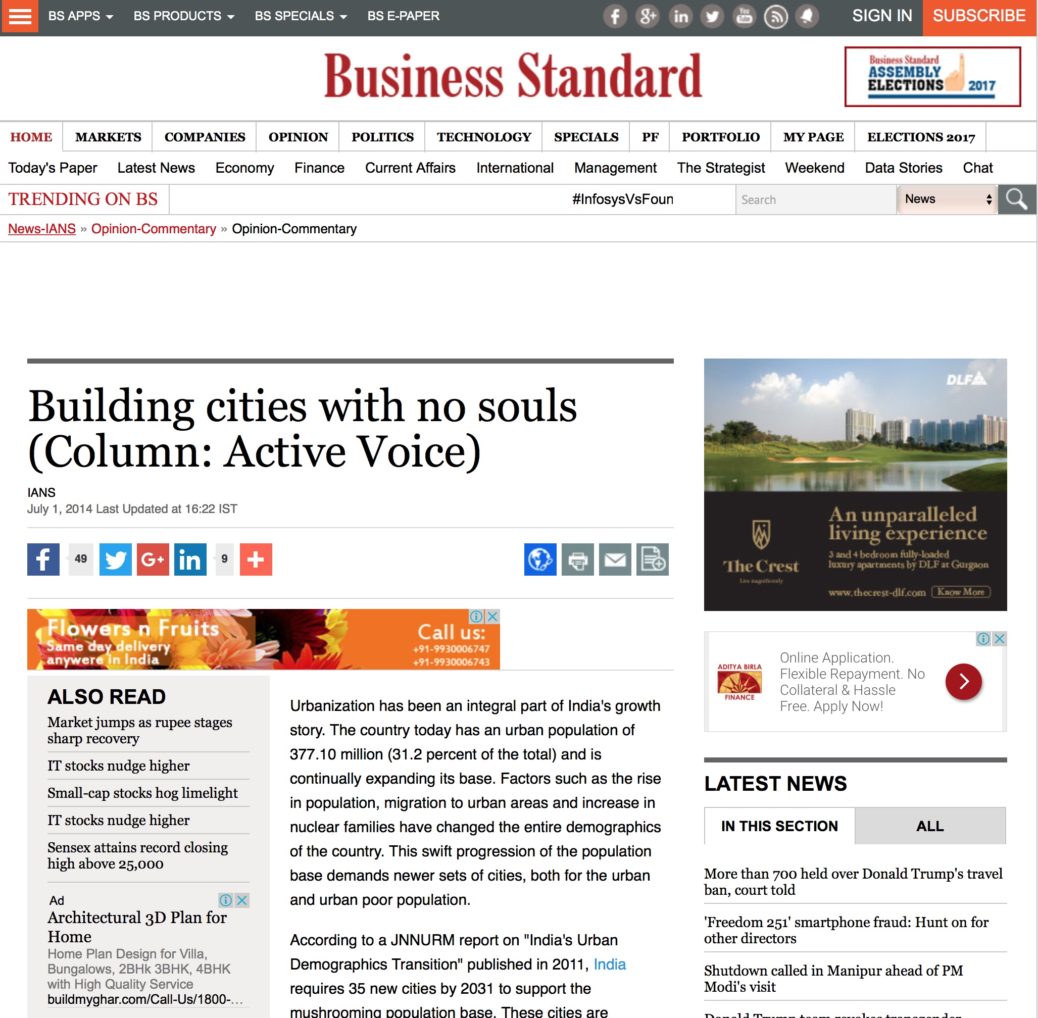 Urbanization has been an integral part of India’s growth story. The country today has an urban population of 377.10 million (31.2% of the total population) and is continually expanding its base. Factors such as the rise in population, migration to urban areas and increase in nuclear families have changed the entire demographics of the country. This swift progression of the population base demands newer set of cities, both for urban and urban poor population.

According to a JNNURM report on ‘India’s Urban Demographics Transition’ published in 2011, India requires 35 new cities by 2031 to support the mushrooming population base. These cities are anticipated to be world-class, having a nearly perfect blend of technology, infrastructure, green environment, and governance. The emerging growth centers are thus being looked upon as the new face of the country. Development models of metro cities like Gurgaon, Pune and Hyderabad have however created apprehensions. These 21st century cities are the clear reflections of potential growth coupled with huge unprecedented urban challenges in the form of infrastructural shortages. These alleged planned cities of India seem to have raised questions on the theory of a planned city because of their shortsighted vision. Since a decade, only partial development has taken place on their agenda. They exhibit a weak infrastructural set up which is further eroded by the pursuit of converting them into favorable investment zone and overlooking their quality of life.

Now, government solely cannot be blamed for transforming our futuristic metro cities into chaotic and saturated urban centers. Instead, real estate developers are equally responsible. They have always converted an opportunity into mere money making deal, be it Gurgaon or Noida. They have smartly tried to make our cities look like pigeonholes in the shadow of bridging the demand and supply gap of houses. They have well understood the underlying potential of the housing sector in the country and have thus customized their business models accordingly.

Earlier, developers emphasized on building premium and luxury homes but now, they have tailored their offerings according to the needs of the masses. They are aware that owning a house is a paramount importance for a majority of the people today so they are tactically positioning and marketing themselves around it. Their focus has shifted from ‘high margin’ to ‘high volume.’ As a result, they are disorderly constructing houses and office spaces around the country. To make their deals look more lucrative, they are efficiently compromising with the planned environment of the city.

Gurgaon is an active case of the point. It is a by-product of the real estate developer’s genuine efforts. Still, the anticipated millennium city of the country, around which a lot of corporate development has taken place, is fundamentally an urban disaster. It has a huge dearth of basic infrastructure, from affordable housing options, integrated urban transportation to other public services like water and electricity. It is a perfect example of, how the city should not grow. The city has numerous high rises of varied size and shape, mostly comprising of big office building. It has very few liveable and affordable places within its territory. The city is a perfect blend of congestion and pollution, thus worsening the overall quality of life.

In such a scenario, the real victims of the agony are the urban poor, who are forced to live in matchbox houses just opposite or near to some big office space. Every developing Indian city is demonstrating a similar trend wherein, right next to a grand, towering modern building lies unauthorized colonies. Interestingly, it reflects widespread inequality just in front of our eyes and is still being overlooked. Nobody is ready to cater to the masses present at the bottom of the pyramid.

The question thus arises, how are we envisioning to build another set of new cities when our existing set up is flawed? With this pace and proficiency, building them will certainly be a huge challenge. There seems to be no clear planning agenda of our upcoming cities, especially with respect to their liveability conditions. There is thus, a pressing need for an approach that is comprehensive yet precise. Like it is in the case of Singapore, the city is a successful model of development with economic innovation, effectual policies and planned environment. They had smartly sketched long-term strategic plans and involved private players in their development process at an early stage by maintaining transparency and accountability. Undoubtedly, by making planning an inclusive process, Singapore today has become a soulful city. It has the right mix of all crucial dimensions of urban life. Indian cities should certainly take cues from such successful models but not blindly imitate them. The real estate developers and government should make joint efforts in India. They should understand that for a city to prosper it requires connectivity, mobility and good quality of life in conjunction with economic growth, social inclusion and environmental sustainability.

People are pinning their hopes on the next government, which would come in power in May. Anticipating that their version of planned development would act as a strong tool to manage the widespread urban issues and transform our Indian cities into bright, futuristic and smart urban centers.

Published with Business Standard on July 1, 2014.