Prospects and risks in the global economy 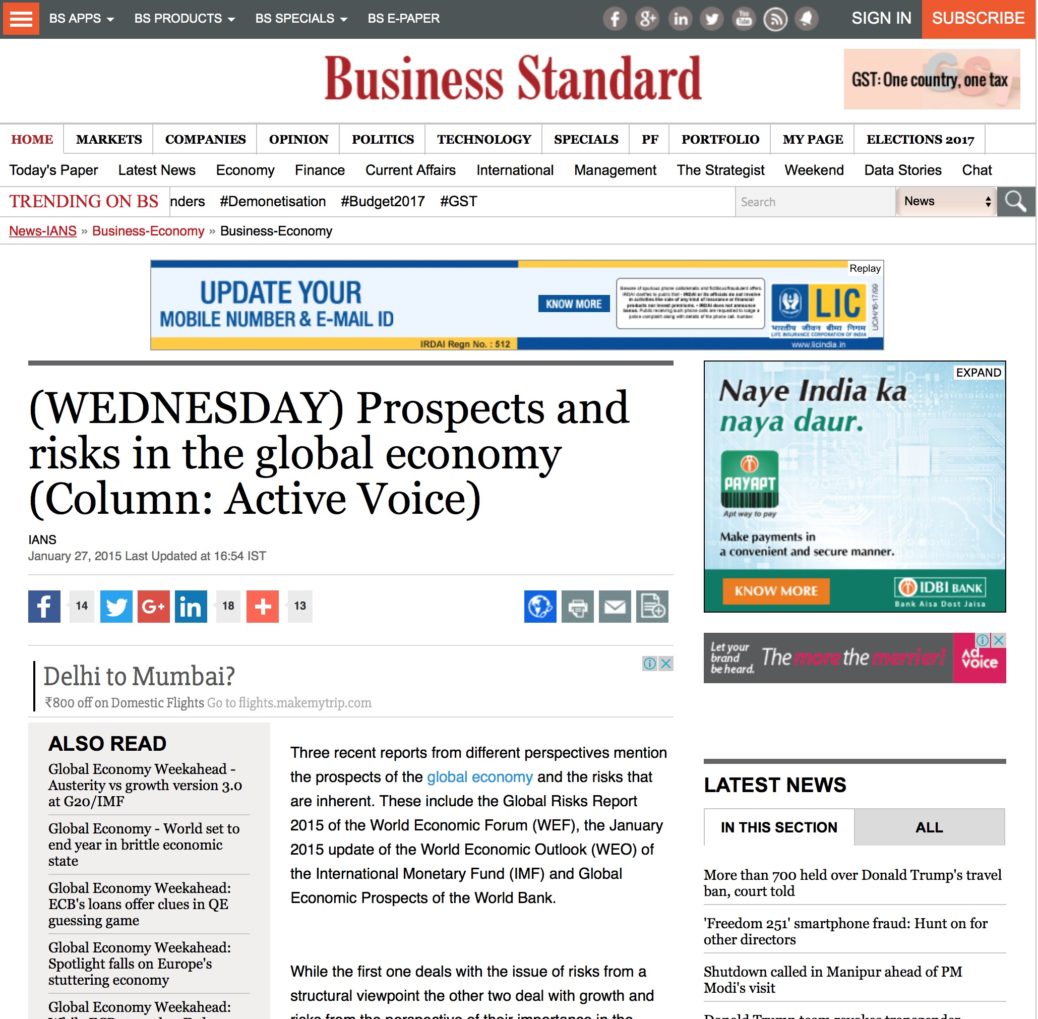 While the first one deals with the issue of risks from a structural viewpoint the other two deal with growth and risks from the perspective of their importance in the global economy, especially from a near to a medium term timeframe.

The Global Risks Report 2015 addresses risks and broadly categorizes them into five broad categories: economic, environmental, geopolitical, societal and technological. Various risks along these dimensions are then measured on a grid with impact on one axis and likelihood of occurrence along the other axis.

This year, risks, which scored high on both the impact and likelihood scale, included inter-state conflicts, water crises, failure of climate chain adaptation, unemployment or underemployment, terrorist attacks, cyber attacks, asset bubbles, food crises and profound social instability. Over the longer time frame of the coming 18 months, the risks that we face are going to include inter-state conflicts under geopolitical risks, profound social instability under societal risks, extreme weather events under environmental risks, cyber attack under the technological risk and unemployment and underemployment under the economic risk categories. The societal and economic risks are particularly pertinent for South Asia, and particularly India, given that its private and public sector faces an enormous challenge with respect to providing jobs to its ever-increasing workforce. Also, the report mentions risks where regions are the least prepared. In the case of South Asia, the three biggest risks facing the region are failure of urban planning, terrorist attacks and water crises.

The January 2015 update of the World Economic Outlook (WEO) of the International Monetary Fund (IMF) deals with the projections for the world economy amid collapsing commodity prices especially that of crude oil. The growth for 2015-16 is projected at 3.5 percent and 3.7 percent, reflecting a downward revision of 0.3 percent relative to the October 2014 WEO. According to the update, this was due to “reassessment of prospects in China, Russia, the Euro area, and Japan as well as weaker activity in some major oil exporters because of the sharp drop in oil prices”. The report also assesses that in 2016, India might just grow at 6.5 percent, outpacing China, which is expected to slow down to 6.3 percent during the commensurate period. However, one must take these global growth forecasts with a pinch of salt as global growth percentages are not reflective of the base effect at work.

The update has an interesting infographic that mentions the risks to global growth. It clearly indicates that while there is an upside risk of lower oil prices, there are downside risks with respect to smaller investments, market volatility, stagnation in the Euro area and Japan and geopolitical events – like the turmoil in Ukraine backed by Russia. It shows that the world economy is still not fully back to normal, but projections suggest it may be getting back to normal.

The World Bank’s Global Economic Prospects is about the global and regional outlook of world economies, the risks that underlie economic growth and the adequate responses policymakers should take in fostering global growth. It forecasts GDP growth at 3 percent in 2015 and at 3.3 percent in 2016. This report, like the WEO update, suggests that India might overtake China in growth percentage terms, but a year later in 2017. An important section of the report is on the global economy and prospects and mentions the relatively robust growth in United States and Britain, while pointing out that this would be further delayed in the Euro area and Japan. China similarly looks set to continue on a path of “gradual deceleration”. The report also mentions key challenges and opportunities currently confronting developing countries like the usage of fiscal policy as a counter-cyclical tool, weaker trade in the post-crisis years leading to slower growth, causes and implications of cheap oil, and remittances as a means of steadying consumption amid sudden stops.

The three reports taken together bring to the fore the challenges and opportunities inherent in the global economy. The Euro area and the US will have to focus on the both the monetary and fiscal policies aimed at reducing risks and fostering growth and innovation. Similarly, Japan has been pursuing an expansionary economic program aimed at boosting growth and competitiveness. This will mean that the easy money era is not completely over with US Federal Reserve ending its massive bond-buying program. China will have to prepare for a softer landing as it decelerates further. In the South Asian and African regions, the focus will have to be shift to reducing supply side bottlenecks, especially cumbersome bureaucracies, underinvestment in human capital, and large infrastructure deficits that are seen to be the main reasons for undermining the competitiveness of these regions. Policies and actions aimed at reducing these will help boost economic growth not only in these regions but also in the world at large.

Published with Business Standard on January 27, 2015.