How blockchain will fundamentally change our lives in future 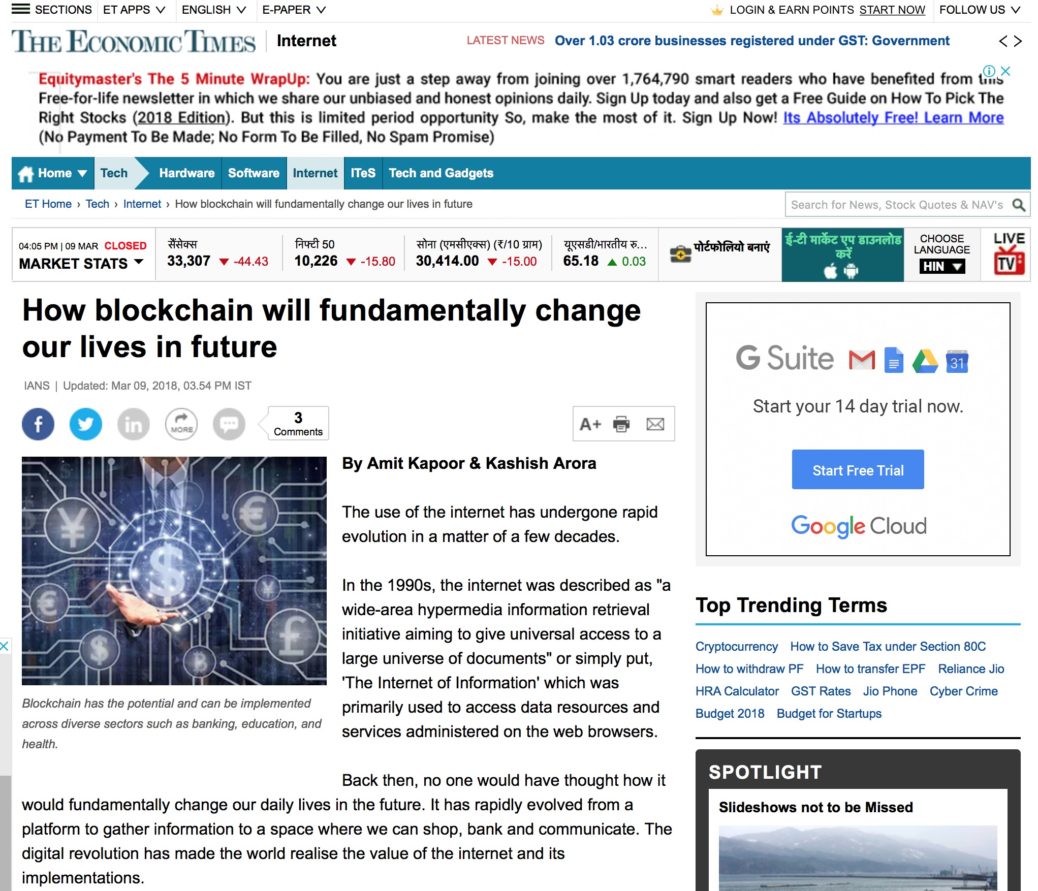 The use of internet has undergone rapid evolution in a matter of few decades. In the 90s, the internet was described as “a wide-area hypermedia information retrieval initiative aiming to give universal access to a large universe of documents” or simply put ‘The Internet of Information’ which was primarily used to access data resources and services administered on the web browsers. Back then no one would have thought how it would fundamentally change our daily lives in the future. It has rapidly evolved from a platform to gather information to a space where we can shop, bank and communicate. The digital revolution has made the world realize the value of internet and its implementations. So, today we are gradually moving towards what Tapscott calls ‘The Internet of Value’; that is the fountainhead of digital assets. Blockchain, which allows us to enable the exchange of any asset across the globe in real-time, ranging from stocks and bonds to music and art, is the next inevitable step in the global progress towards ‘The Internet of Value’.

Various applications of internet have been made possible which are efficient like peer-to-peer money transfer, because internet reduces the transactional and communication cost to a bare minimum. This is the same force driving the new platforms that have emerged to deliver goods and services at levels of efficiency previously unimaginable and blockchain is leading the revolution in redefining the new-age internet.

Like a traditional ledger, Blockchain is essentially a record of transactions. These transactions can be any movement of money, goods or secure data—for example, a purchase at a supermarket, or the assignment of an Aadhar Number. It works in three basic steps; First, it gathers data that user has provided in forms of smart contracts, transactions IDs. Second, it orders the received data into blocks and finally chains them together securely using cryptography making it decentralized and accessible via any computer/mobile device across the network.

Now the question here is why do we need it? What is it that will change the way groceries are bought, stocks are purchased, money is transferred, bills are paid and land deeds are made? The answer possibly can be the demand for trust and security emerging from both people and enterprises alike. Blockchain best serves these purposes as trust factor is native to the medium. For example, if you are transferring money online to your friend, then your medium becomes internet and to secure your transfer, a clever programming code is written. The same concept is applied by blockchain, but the security is made more secure by cryptography.

Blockchain has the potential and can be implemented across diverse sectors such as banking, education and health. For instance, we keep our savings, assets and cash with banks because they are trustworthy and secure. However, their data is centralized; making them quite prone to cybercriminals that can bring the entire banking system to a halt. Now consider a person working abroad who wants to send remittance to his family back home but has to encounter multiple clearances before his family receives it. With Blockchain technology, the concept of crypto currency comes into picture thus resulting in open-access registry of monetary flows which makes the intermediation of financial institutions unnecessary and even costs less.

Second, in the field of healthcare, while big data analytics and artificial intelligence are simplifying healthcare delivery by smartly diagnosing the diseases from the patterns of numerous plugged-in electrocardiograms, blockchain is turning out to be a perfect platform for recording the medical attention of a patient and identifying a trend from the data recorded. Consider health card; a database which can be perceived as your health identity as it carries your entire medical history. Such technologies can find effective application in reducing information asymmetries within the healthcare and insurance markets by providing the most accurate data on patients.

Finally, Blockchain can reorient the education system by delivering academic transparency. It can build an e-portfolio of academic credentials which has your test scores since the day you entered school. Paying for school fee in crypto currency-which is decentralized- from anywhere around the world on a secured network is commendable. Hence, this multi-trillion-dollar industry of education is indeed revolutionizing.

Also, if implemented in government operations, blockchain will help break down barriers built from bureaucracy and corruption by providing a means to bypass existing power structures. It could be used to transform the way charities are created and regulated. By implementing a transparent system of transactions that include deposits of cash, transfers of donation and expenses spending will bring about a paradigm shift on how rules are enforced for these organizations.

Moreover, this technology has the competence to revamp the present system by automating manual processes, eradicating frauds and controlling the issues for authorization. Its implementation across diverse sectors can be a solution to the most foundational problems of mankind. Hence, Blockchain could be the perfect platform to transform a knowledge-driven economy into a digital-inclusive society.

The article was published with Economic Times, Business Standard on March 9, 2018.