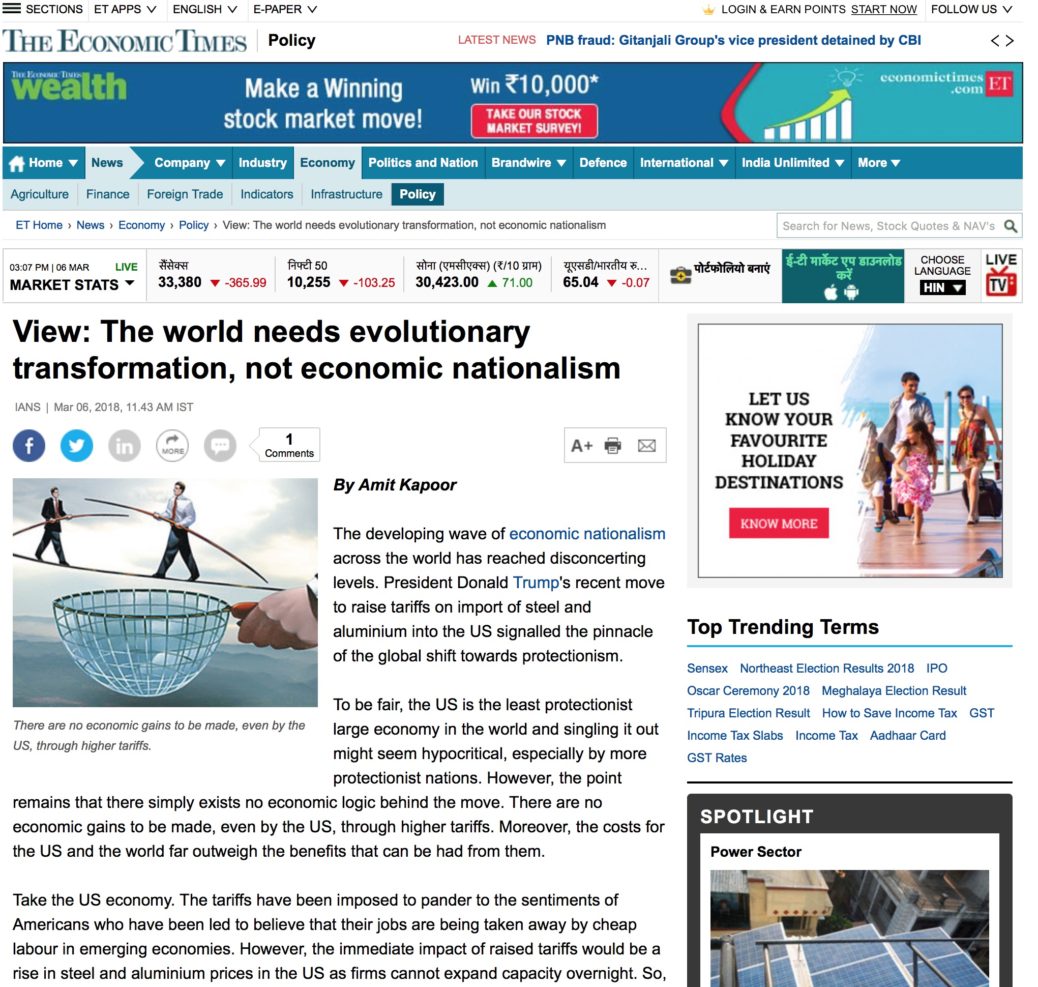 The developing wave of economic nationalism across the world has reached disconcerting levels. Trump’s recent move to raise tariffs on import of steel and aluminium into the US signalled the pinnacle of the global shift towards protectionism. To be fair, US is the least protectionist large economy in the world and the singling it out might seem hypocritical, especially by more protectionist nations. However, the point remains that there simply exists no economic logic behind the move. There are no economic gains to be made even by the US through higher tariffs. Moreover, the costs for the US and the world far outweigh the benefits that can be made from it.

Take the US economy. The tariffs have been imposed to pander to the sentiments of American natives who have been led to believe that their jobs are being taken away by cheap labour in the emerging economies. However, the immediate impact of raised tariffs would be a rise in steel and aluminium prices in the US as firms cannot expand capacity overnight. So, the cost of goods that use these products as inputs will rise and be passed on to the consumers. In turn, if they decide to reduce their consumption due to rising prices, jobs will be lost in the process.

Moreover, according to the US Bureau of Labour Statistics, the number of Americans employed in sectors that consume steel and aluminium far outnumber those that are directly employed in those sectors. The costs borne by Americans due to a rise in inflation would, therefore, far outweigh any gains that the people employed in the concerned industries would make. So, raising tariffs of these sectors is either ill-thought-out or no more than a political gimmick to appease the voter base.

Now, consider the world economy. China was the obvious target of the move considering the fact that it is the world’s largest steel exporter and has been widely accused of dumping cheap steel in global markets. However, China has been reducing its overcapacity in the steel sector due to ecological and economic reasons – shutting down about 50 million tons of its production in 2017. To put things in perspective, US imported less than a million tons of steel last year. Therefore, US tariffs would hardly affect the US economy.

Instead, Trump will end up hurting his closest global allies in Canada, South Korea, Japan and EU. The former three countries will be affected on account of being the largest suppliers of steel to the US while EU fears that the exports meant for US would now be diverted to Europe and affect local producers. This might force retaliatory tariffs from countries around the world and, in an unlikely eventuality, could also result in a full-blown trade war.

Even if no trade wars ensue, the economics of protectionism does not hold water in an already globalised world. First, international commerce is now driven by knowledge flows that are not affected by tariffs. Second, manufacturing is dependent on global supply chains, which Trump means to attack. However, in economist Richard Baldwin’s words, imposing tariffs is like building a wall in the middle of the factory floor that only decreases efficiency of production and benefits no market. Finally, the era when countries were build on the foundation of manufacturing jobs is nearing its end. As automation and robotics makes rapid advancements, the nature of work is fast-changing and the protectionists that promise the return to past glory of the twentieth-century factory floors are selling nothing but snake oil.

India has also shown a growing proclivity towards protectionism, most recently in the Union Budget that increased custom duty in more than 10 sectors. However, the same arguments hold true for India as well. In fact, in 2016 India raised tariffs on imported steel to protect domestic producers against cheap Chinese imports. However, manufacturing firms using steel inputs lost their export markets and had to lay off workers.

More importantly, India also cannot hope for a manufacturing revolution that defined the economic success stories of East Asia and even China. Quite a significant proportion of blue-collar jobs will be lost to automation and modern emerging economies have to adapt to these conditions. Countries that choose to close themselves off to foreign competition are bound to lose their innovative edge. Such inward-looking policies have not helped in the past and they are not expected to do so now.

The perception that globalisation is a zero-sum game needs to be dropped as it has been repeatedly been seen that open borders have been beneficial for most stakeholders. A better strategy would be to improve social security of workers exposed to risk in open markets as the Nordic countries have successfully done. The political mood of restoration of past glory needs to be dropped. The times call for evolutionary transformation.

The article was published with Economic Times, MoneyLife, Business Standard on March 6, 2018.