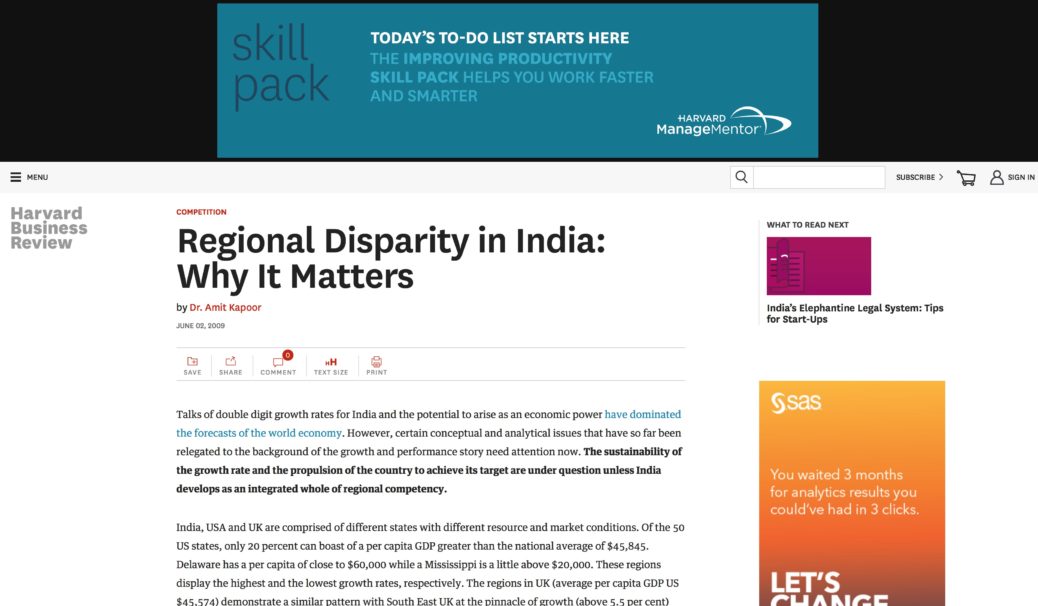 Talks of double digit growth rates for India and the potential to arise as an economic power have dominated the forecasts of the world economy. However, certain conceptual and analytical issues that have so far been relegated to the background of the growth and performance story need attention now. The sustainability of the growth rate and the propulsion of the country to achieve its target are under question unless India develops as an integrated whole of regional competency.

India, USA and UK are comprised of different states with different resource and market conditions. Of the 50 US states, only 20 percent can boast of a per capita GDP greater than the national average of $45,845. Delaware has a per capita of close to $60,000 while a Mississippi is a little above $20,000. These regions display the highest and the lowest growth rates, respectively. The regions in UK (average per capita GDP US $45,574) demonstrate a similar pattern with South East UK at the pinnacle of growth (above 5.5 per cent) while North East lags behind at less than 4.25 per cent. The conclusion is simple: States in the same country follow a variant growth trajectory due to the difference in their resources and policy status.

Similarly India is sub-divided into 29 states differing in terms of their productive potential and the type of industry they can support. The actualization of their potential holds the key to increasing the competitiveness of the nation as a whole. Sub-national regions are the locus of important determinants of competitiveness for the nation. The potential of the states drives the diversified competency of the nation where regional specialization provides the impetus for growth of the nation. The secret of growth of USA and UK lies in relegating the economic roles to the appropriate levels of the geographical strata.

India is still reeling under the influence of concentrated economic activity. The national average per capita GDP is $977.7 but Goa is above $1500 while Bihar is closer to $200. However, the similarity ends here. Unlike USA and UK, the pattern of most states tends to display a proclivity towards similar industries. Certain states benefited from first-mover advantage and the others imitated the policy and structure to induce similar growth rates–irrespective of the location and its inherent competencies.

India needs to be perceived as an amalgamation of resources and competencies spread across its states. Businesses and companies need to adjudge investment opportunities through the lens of the competencies offered by the states. India needs to build on its competitiveness banking on the specialization proffered by each region and develop the infrastructure and policies to support that industry. It’s time for all the Indian states to realize their roles in the development of the industrial base in the country and take a productive initiative in this race for competitiveness.

The article was published with Harvard Business Review Blog on June 2, 2009.