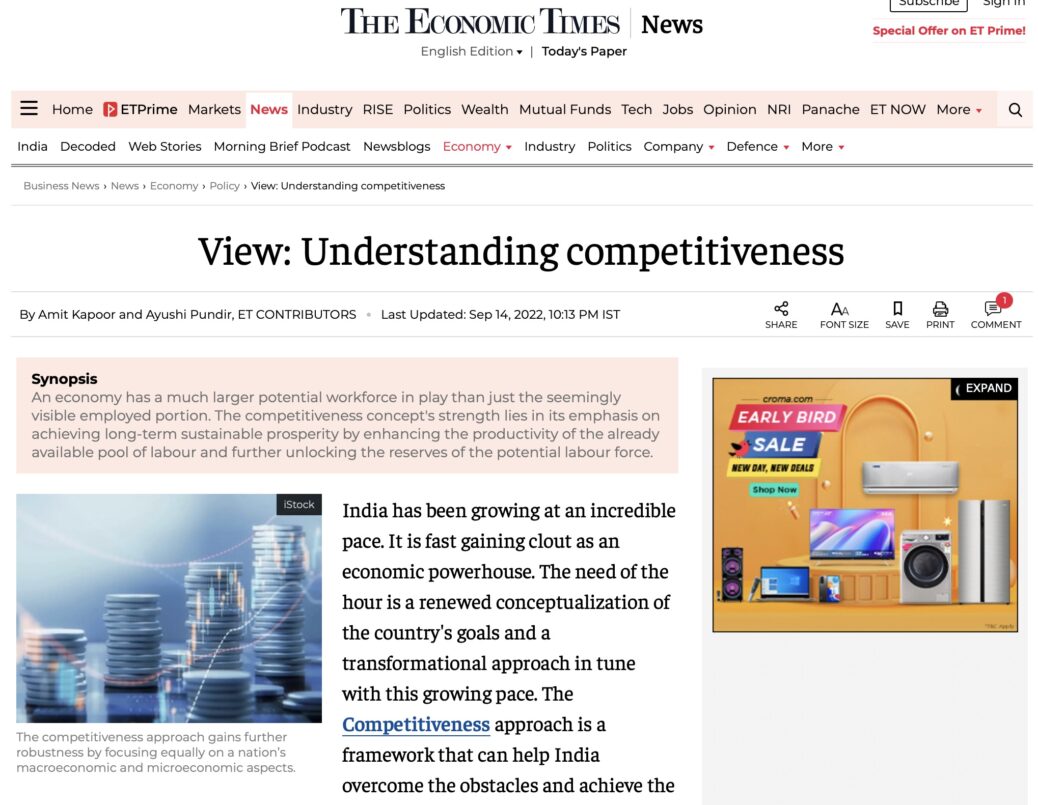 An economy has a much larger potential workforce in play than just the seemingly visible employed portion. The competitiveness concept’s strength lies in its emphasis on achieving long-term sustainable prosperity by enhancing the productivity of the already available pool of labour and further unlocking the reserves of the potential labour force.

India has been growing at an incredible pace. It is fast gaining clout as an economic powerhouse. The need of the hour is a renewed conceptualization of the country’s goals and a transformational approach in tune with this growing pace. The Competitiveness approach is a framework that can help India overcome the obstacles and achieve the desired transformation. The term ‘Competitiveness’ has typically been used to refer to different factors – higher market share, a competitive exchange rate, higher exports, greater FDI inflows, etc. Thus, it is essential to gain a clear understanding of what competitiveness is, before delving into the subtleties of the approach.

Export success is one of the parameters that get linked with the term Competitiveness. However, there are notable differences between the two terms, although they are often used interchangeably. While exports are one of the fundamental factors for economic growth, there is no ample evidence to indicate a direct causal relationship between the two. There are multiple other factors that are equally important. A sole emphasis on an export-led growth strategy gives prominence to export-oriented sectors, thereby neglecting domestic industries and other facets of the economy.  The value generated in this manner will not translate into a higher standard of living for the larger population. What we need is a holistic approach to economic growth and development that takes into account a range of important factors. In contrast to a confined focus on export-oriented sectors, the competitiveness framework is all-encompassing, emphasizing the need to augment performance across the entire economy.

Productivity is generally defined as input efficiency, i.e., output per unit of input in plain economic terms. However, it is imperative to focus, not only on using fewer inputs to produce more but also on the value of what is produced. Meeting the needs of different sections of society, be it consumers or the producers themselves, is what value creation is all about. Regions become competitive if they manage to provide an environment that enables firms to be productive, and individuals to take part in the value generated through their productivity. Sustaining productivity becomes a major challenge if a nation is fixated on just producing more and more of a good utilizing fewer inputs without considering the actual value the goods entail for society. In broad terms, productivity should be inferred in terms of value creation.

Each region has its own strengths and weaknesses and different drivers of productivity. These need to be gauged and a location-specific assessment needs to be undertaken to identify and understand the enablers as well as barriers to productivity. A more detailed analysis of competitiveness would provide a comprehensive picture for precise policy insights to sustain prosperity. Prosperity is determined by factors such as how effectively a location competes using the available capital, human and natural resources, and not merely by just the industry it competes in. Firms are at the core of generating prosperity. They have multiple choices to make such as the sector to compete in, the business model to follow, bringing efficiency in its production process and value-addition. These choices in turn go on to shape the productivity level of the entire nation. Thus, it becomes imperative to enable companies by giving them the tools they need to maximise their returns on investments and move beyond the traditional approach of reliance on cheap labour toward innovation-based operations.

Prosperity is largely a product of two fundamental factors – Labour productivity and labour mobilization. Labour productivity, put simply, is output (measured in terms of GDP) per unit of labour input. Labour mobilization is the ability of a country to mobilize its workforce based on certain geographical and occupational factors. On the labour productivity front, India has registered a positive development. But labour mobilization continues to pose a considerable challenge for India. In the coming years, between 2021-2041, the demographic dividend would provide the country with its highest working-age ratio. An economy has a much larger potential workforce in play than just the seemingly visible employed portion.  The competitiveness concept’s strength lies in its emphasis on achieving long-term sustainable prosperity by enhancing the productivity of the already available pool of labour and further unlocking the reserves of the potential labour force.

The competitiveness approach gains further robustness by focusing equally on a nation’s macroeconomic and microeconomic aspects. The two aspects play different yet complementary and significant economic roles. They constitute the principal elements of competitiveness. While macroeconomic aspects comprise broad factors like social and political institutions, and monetary and fiscal measures, microeconomic indicators look at factors having a direct influence on individual companies and the labour force. The two aspects together offer a holistic view of the economy. Taking a holistic approach does not mandate moving forward on all policy fronts. It rather implies developing an extensive strategy based on a thorough assessment of the Indian competitiveness diagnostics and then prioritizing actions to create a more distinctive and competitive position for a nation.

Lastly, in the long run, the foundation for elevating India’s status from a lower-middle-income country to a high-income economy should be built on new guiding principles, priority policies, and a new implementation model. This has become crucial now more than ever since India has emerged as a prominent geopolitical player and its economic trajectory significantly impacts not only India but also the rest of the world.

The article was published with Economic Times on September 14, 2022.