As India moves forward, it needs to learn from the past 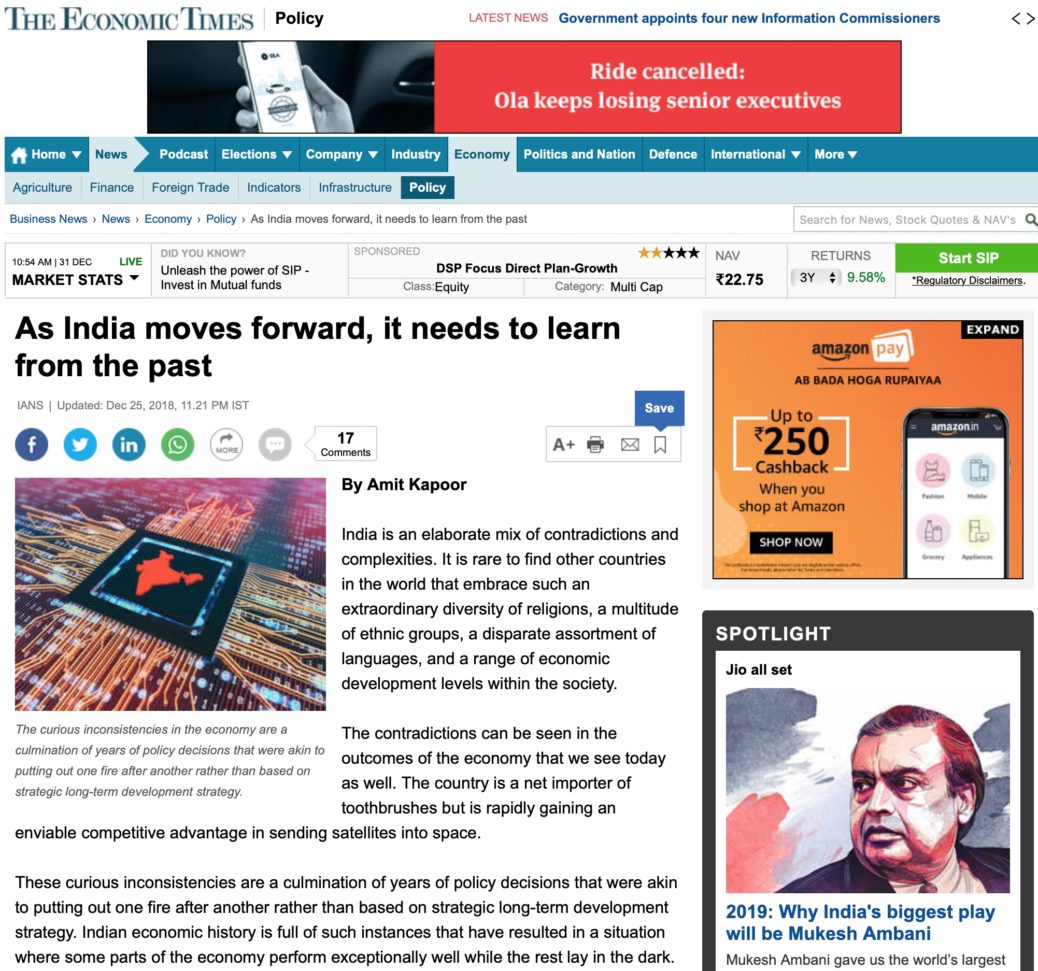 Learning from the Past

India is an elaborate mix of contradictions and complexities. It is rare to find other countries in the world that embrace such an extraordinary diversity of religions, a multitude of ethnic groups, a disparate assortment of languages, and a range of economic development levels within the society. The contradictions can be seen in the outcomes of the economy that we see today as well. The country is a net importer of toothbrushes but is rapidly gaining an enviable competitive advantage in sending satellites into space.

These curious inconsistencies are a culmination of years of policy decisions that were akin to putting out one fire after another rather than based on strategic long-term development strategy. Indian economic history is full of such instances that have resulted in a situation where some parts of the economy perform exceptionally well while the rest lay in the dark. The origin of all present economic problems is commonly attributed to the adoption of the planned model of development soon after independence, which slowed economic activity under a complex web of quotas and licenses.

However, the idea that the state could plan to meet each and every demand and need of its citizen had quite a few takers in the post-War era, even if it might seem absurd today. It was not simply Nehru’s fascination with the idea of socialism that India went down that path as is often suggested. In fact, Nehru had invited the best and brightest economists of the time to India for insights on the viability of a planned economy.

I.G. Patel recalls in his memoir how a series of economists – Gunnar Myrdal, Ragnar Frisch, Jan Tinbergen, Oskar Lange and Richard Goodwin – came to India with a definite view that development could be plotted and planned till the last mile. The choice also does not seem out of place when seen in the context of the times. India had gained independence at a time when the socialist model was seemingly working in USSR while the capitalist world seemed to be crumbling under economic depression and wars.

The mistake, however, lay in persisting with the model even after its failures and inefficiencies became apparent. By the time of Nehru’s death in mid-1960s, the criticisms of planned development were hard to miss. The Swedish economist Gunnar Myrdal penned a telling account on the failures of development, Asian Drama, in which he remarked that “India’s promised social and economic revolution failed to materialize.”

The arguments of free marketeers led by Milton Friedman were also becoming dominant in the field of economics at the time. A few East Asian economies – mainly South Korea, Taiwan, Hong Kong and Singapore – began opening up their economies after becoming disillusioned with the central planning model. They adopted a unique approach of state-led capitalism with a substantial export-oriented focus. Over the next few decades these economies entered a period of sustained high-growth phase that popularly came to be known as “the East Asian miracle.” Therefore, India’s continued fascination with the status quo becomes hard to defend after Nehru’s death. Instead of evolving with the times, India became even more closed and tightly state-controlled under Indira Gandhi.

A spate of nationalisations beginning from banks to insurance to coal were undertaken during her tenure; sectors which are reeling from corruption and inefficiencies until date. Her shift towards the left was less due to ideological reasons as was the case with Nehru, but more due to sheer survival in the Congress party where she found herself competing for space with the old guard; most significantly, Morarji Desai. It helped her cause to portray herself as the preserver of her father’s legacy, even though some of the actions were aspects that even Nehru had not deemed fit to pursue.

India hardly made any policy shifts even when China began opening up its markets under Deng Xiaoping in the latter half of 1970s. The inaction persisted despite the fact that between 1960 and 1990 at least a dozen committees were set up to examine almost every aspect of the control economy, each of which unfailingly came to the conclusion that the system of industrial licensing was at fault. But, radical steps like moving away from the socialist model could cost elections. So, the intent of chalking out a long-term strategy was generally missing.

Only incremental changes were made through the eighties when Indira Gandhi returned for her final stint in office with Rajiv Gandhi following along similar lines. Eventually, it was the disastrous crisis of 1991 that allowed the Indian economy to shed the arcane system of licensing and controls. The travails of central planning were finally put to rest.

The biggest success story that the economy has experienced in the post-liberalization period – that of the IT boom – has also been a matter of chance rather than intent. India had a huge pool of engineers due to the establishment of higher education institutions during Nehru’s time who also had an added advantage of being English-speaking. The combination proved attractive to the developed world and the rest is history.

It should be said that these are sweeping generalisations that have to be made for the purposes of brevity in a column. But they are hardly refutable. We have dealt with the issue in depth in our forthcoming book, The Age of Awakening. In more recent times, there have been instances that reflect a shift away from this history of inaction and short-termism. But the tendency to revert to the old ways is extraordinarily high. The recent political obsession with farm loan waivers before elections is a case in point. In times like these, it is necessary to look back at history so as to not repeat it.

The article was published with Economic Times, Business Standard and Outlook India on December 25, 2018.