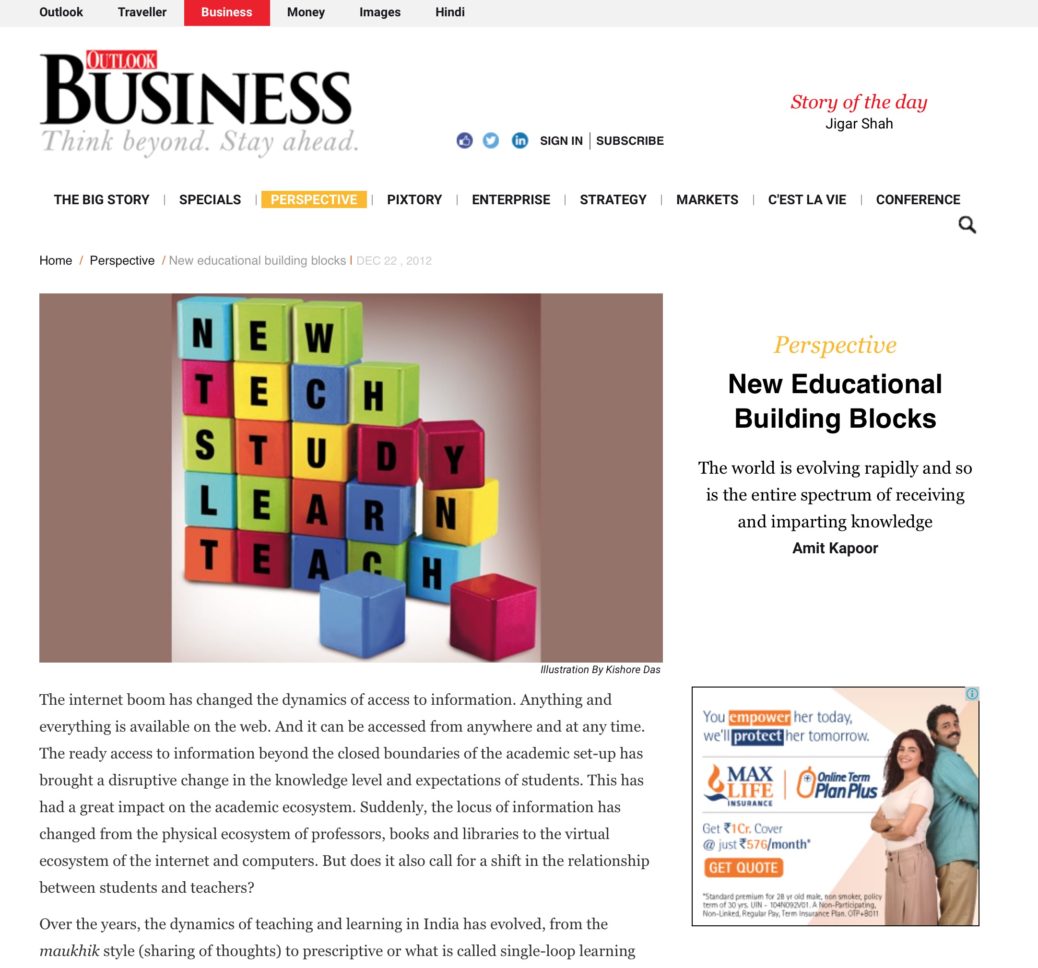 The internet boom has changed the dynamics of access to information. Anything and everything is available on the web. And it can be accessed from anywhere and at any time. The ready access to information beyond the closed boundaries of the academic set-up has brought a disruptive change in the knowledge level and expectations of students. This has had a great impact on the academic ecosystem. Suddenly, the locus of information has changed from the physical ecosystem of professors, books and libraries to the virtual ecosystem of the internet and computers. But does it also call for a shift in the relationship between students and teachers?

Over the years, the dynamics of teaching and learning in India has evolved, from the maukhik style (sharing of thoughts) to prescriptive or what is called single-loop learning (involving a uni-directional flow of information from teacher to students) and, finally, collaborative or double-loop learning. In Indian tradition, the first model of education was the gurukul. This involved a maukhik pedagogy, where the teacher or guru used to impart learning to the students in natural settings by using a mix of real-life examples, quotes from literature and actual practise. The focus was on sharing knowledge, which was derived from ancient scriptures, literature and real-life experiences. The teacher was revered as a learned man and there was a deep bond of trust, faith and respect between him and his students.

The second model of education emerged over time as a network of universities and colleges. This involved a prescriptive pedagogy, in which published information in the form of textbooks became a central piece of reference in the relationship between the teacher and the students. The focus of learning shifted towards knowing “what” rather than understanding “why” and “how”. The teacher-student relationship shifted from one of mutual trust and respect to a forced marriage where each nurtured their individual goals and objectives. At one end was the teacher, focused on finishing portions and syllabi and at the other end were the students, intent on getting the stamp of approval from top academic institutions that would allow them to make a grand entry into the professional world.

The third model of education started emerging in late 1990s, after the penetration of mobile and internet technologies. Now, students have ready access to more knowledge than ever before. The source of knowledge has shifted from boundary spanning physical entities (teachers, books, libraries) to technology-driven online platforms (websites, audiobooks and internet-forums). Naturally, this transformation also calls for changes in the education system. First, teachers need to redefine their role in the academic system from that of a preacher to that of a facilitator. Second, the students need to shift their focus from learning to understanding.  Third, education needs to shift focus from the teaching mindset to that of experiencing and reflecting. Rather than continuing in the same orthodox style, what is needed today is to enable students to experiment and apply the results in real-life settings. To embed the spirit of entrepreneurship and inquisitiveness into the DNA of the emerging youth, this institutional change in the education system has to be applied across the spectrum, from elementary to advanced level.

On a positive note, this trend has started emerging. An example that deserves attention is the activity-based learning initiative in Tamil Nadu at the elementary level. An NCERT survey in 2005 highlighted that the performance in basic mathematical and language skills of students from the state was below the national average. And this despite the huge spending by the Tamil Nadu government on education infrastructure. The decision was then taken to replace traditional teaching methods with activity-based learning, which transformed the pedagogy from teaching to collaborative learning. Now, the teacher became a facilitator and there was a shift from listening to having fun and experiment-based peer learning. The underlying objective was to enable students to develop intuitive thinking, applied knowledge, self-confidence and genuine interest in learning the concepts. There was a dramatic improvement in the overall performance of students, which was duly captured in the 2008 NCERT survey.

Another noteworthy example is the grassroots innovation-related courses such as Shodh Yatra, taught by Anil Gupta at IIM Ahmedabad. These courses are aligned with the purpose of identifying and experiencing innovations happening at the grassroots level, most of which do not reach the patent stage and fail to get commercialised due to lack of documentation, patent and funding.  The students are made to spend time with such innovators and understand the kind of innovations emerging from this section of the society. The kind of field-level experience and learning the course imparts has made it one of the most sought-after at the B-school. Both these examples reflect the kind of changes desired in the existing academic set-up to bring about an overall transformation in the educational eco-system. If more such initiatives come about, we will have more students learning not just “what” but also “why” and “how”.