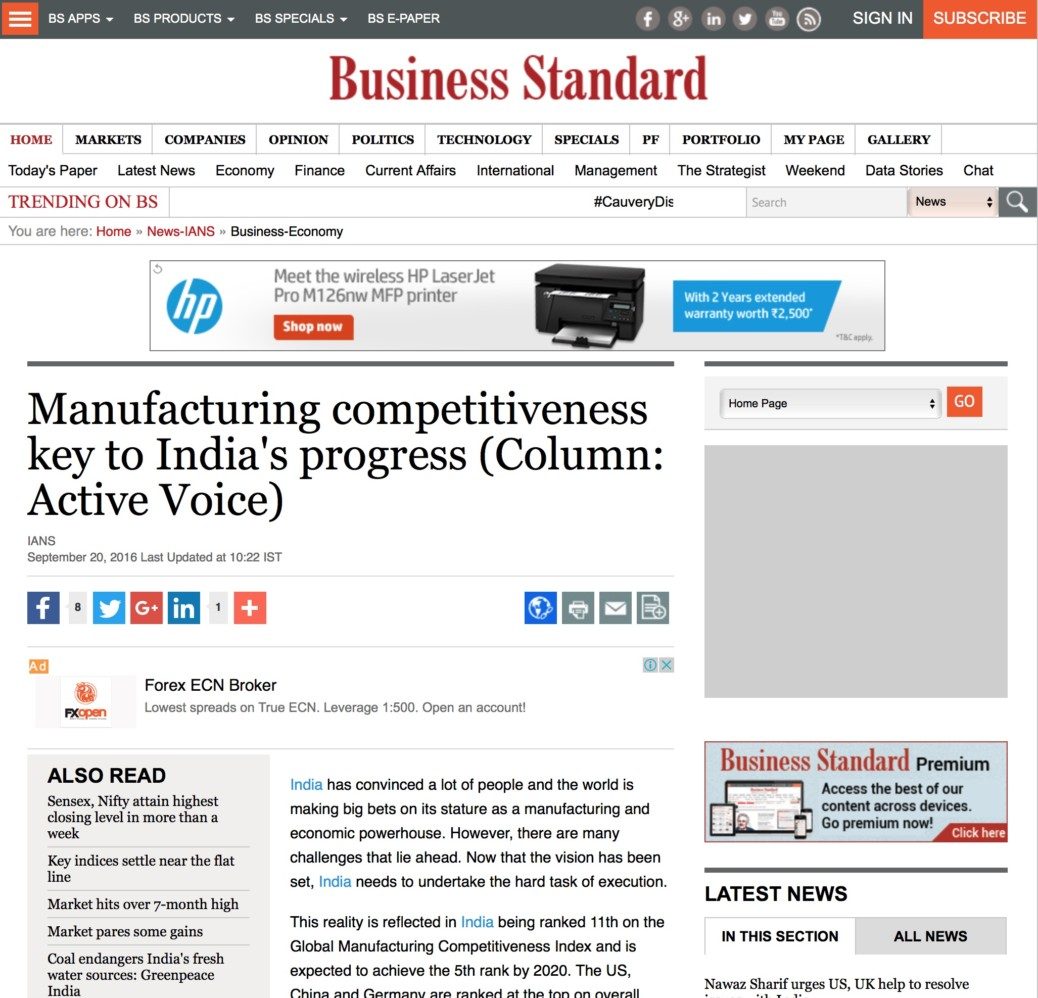 India has convinced a lot of people and the world is making big bets on its stature as a manufacturing and economic powerhouse. However, there are many challenges that lie ahead. Now that the vision has been set, India needs to undertake the hard task of execution.

This reality is reflected in India being ranked 11th on the Global Manufacturing Competitiveness Index and is expected to achieve the 5th rank by 2020. The US, China and Germany are ranked at the top on overall manufacturing competitiveness.

If we analyze the performance of various countries on these parameters, India is one of the least competitive countries when it comes to physical infrastructure as well as legal and regulatory environment with scores of just 10 and 18.8 respectively as compared to 90.8 and 88.3 of the United States and 55.7 and 24.7 of China. India has performed better on cost competitiveness, where it scores 83.5 compared to 39.3 of the US and 96.3 of China.

India’s poor score on talent (51.5), the most important parameter for manufacturing competitiveness, is seemingly paradoxical as India has been boasting about its demographic dividend to the world while its adult population has an average of only 4.4 years of formal education.

There is no denying that India has a strong demographic advantage for many decades to come as its working population will reach 870 million by 2030, the largest in the world by that time. However, India needs to engage its working demographic meaningfully and skill them to make them productive. India has suffered a lot due to poor management and the frustration of its unemployed youth has sometimes culminated in protest.

Examples of this are the Maoist movement, Gujarat’s Patel reservation protest and Haryana’s Jat reservation protest. During 1991 to 2013, the Indian economy could only employ roughly 50 per cent of the job-seeking population. Despite the abundance of working population, there is a gap in the skill level due to which India is losing its competitiveness.

The Indian education system has been accused of not developing skills but focusing on giving degrees to people. Vocational institutes of training for in-demand skills like masonry, welding, plumbing, carpentry and operating heavy equipment receive secondary treatment. People instead get traditional degrees even if it means staying unemployed due to lack of relevant skills.

Indian society does not appreciate careers other than being a doctor, engineer or high ranking government official. Hence aspirations are always aligned towards these fields, leading to disproportionate competition for limited vacancies. In Germany, about 60 per cent of the population goes through 2 to 3.5 years of vocational and classroom training at an industry. As a result of this, Germany scores 97.4 for talent competitiveness.

India can learn from Germany’s dual system of education and develop at least one industrial skill among its people.

India’s biggest competency similar to China’s is “low cost” and on the other hand the biggest shortcoming for investors is being caught in the web of government regulations. Since the new government assumed office in 2014, India has reduced the regulatory red tape and started the Make in India campaign. This brought in FDI of $9.6 billion in 2014-15 but it dropped to $8.4 billion in the next fiscal as investors aligned themselves to the ground reality in India.

Investors remain bullish on India but the Indian government, in its classic style, still remains elusive by taking two years to pass the Goods and Services Tax bill, with the new land acquisition bill still pending. These bills were drafted to smoothen the ground for manufacturing operations in India.

India scored 32.8 on innovation competitiveness compared to 98.7 of the US and 47.1 of China. India should have the foresight to predict the next technological advances in manufacturing, with developing countries bullish on technologies like advanced robotics, internet of things, augmented reality and additive manufacturing (3D printing). India needs to stay ahead of the innovation curve to remain competitive in the mid to long term.

A very good indicator of innovation is the R&D spend. The US and China are the largest spenders in this sphere at 2.74 percent and 2.1 per cent of their GDP (purchasing price parity – PPP – adjusted) compared to India’s 0.85 per cent of GDP (PPP adjusted).

If we look closer home, Maharashtra, Gujarat and Tamil Nadu rank at the top in manufacturing competitiveness with scores of 67.07, 64.75 and 64.63.

The reason for their success has been their ability to successfully tap into the potential of industrial agglomerations and an efficient transport system that has enabled them to stay cost competitive along with the benefit of having a coastline.

We need to draw lessons from successful manufacturing economies of the world and internally, need to look at the leading states for guidance. India has the ingredients required to become a manufacturing giant and it can reach its goal if it keeps on improving on manufacturing competitiveness.

Published with Business Standard and Millennium Post on September 20, 2016.