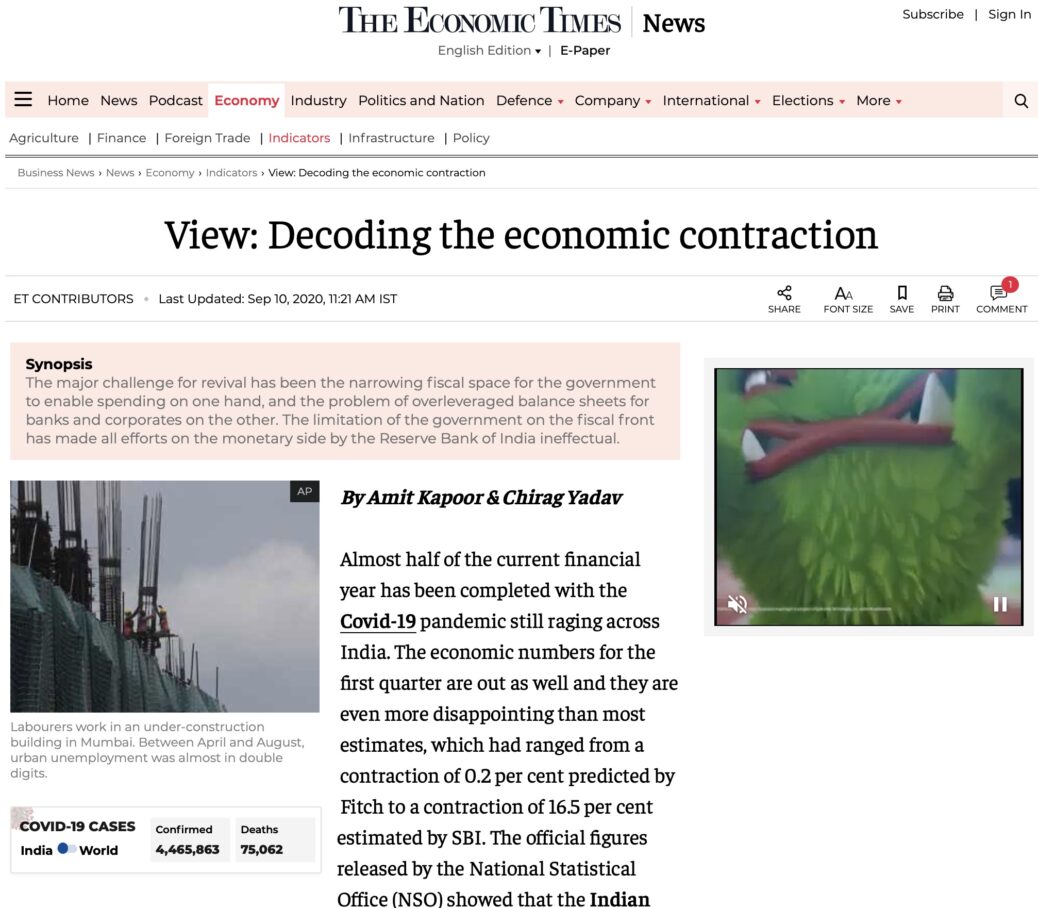 Almost half of the current financial year has been completed with the COVID-19 pandemic still raging across India. The economic numbers for the first quarter are out as well and they are even more disappointing than most estimates, which had ranged from a contraction of 0.2 percent predicted by Fitch to a contraction of 16.5 percent estimated by SBI. The official figures released by the National Statistical Office (NSO) showed that the Indian economy had contracted by 23.9 percent in Q1 of 2020-2021 compared to a growth of 5.2 percent in Q1 of 2019-2020. These numbers are the first estimates based on data obtained from large firms and are bound to worsen once more accurate and representative data becomes available. However, since India was under a stringent lockdown for practically the entirety of Q1 (April-June) and the economy has gradually opened up after that, the following quarters should marginally ease out the pain.

Yet, it is almost impossible for India to achieve positive – or even zero – growth over the full financial year and it would take a Herculean effort to manage negative growth in single digits. This can be seen with a rough back-of-the-envelope calculation. India’s Q1 GDP at constant (2011-12) prices has been estimated at ₹26.9 lakh crores. The country’s GDP during 2019-20 stood at ₹145 lakh crores (at constant prices). To achieve zero growth, i.e. similar output as last year, the GDP for the next three quarters should clock an average of almost ₹40 lakh crores, which would require double-digit quarterly growth figures – a feat only achieved in the best growth years prior to 2008. On the other hand, to manage a contraction less than 10 percent over the current financial year, the economy would require an addition of more than ₹35 lakh crores on an average each quarter for the remaining quarters. Achieving such an output might still be difficult in case the current quarter experiences negative growth as well, which is quite likely.

To further understand the GDP numbers, it is worth noting that the last time India’s quarterly GDP was near the latest figure of ₹26.9 lakh crores was in Q3 of 2014-15 – about 22 quarters ago. Since the country was in a lockdown in Q1 of 2020-21, it is not a perfect comparison to draw but the repercussions of these statistics are dire and have a significantly pernicious impact on millions of livelihoods. As per the latest statistics from the Centre for Monitoring Indian Economy (CMIE), about 21 million salaried jobs have been lost between April and August. The unemployment in the month of August across India was 8.35 percent as per their survey up from 7.4 percent in the previous month. Urban employment was almost in double digits. So, the economic crisis still seems to be a developing phenomenon.

The agriculture sector has been the saving grace for people who have lost jobs in the last few months. The sector has added 14 million jobs in August alone as per the CMIE data. The agriculture sector was also the only part of the economy that has presented positive growth in the Q1 estimates put out by NSO. At constant prices, the agriculture sector grew at 5.69 percent owing to the good Rabi season output. It will, however, be difficult to sustain this growth momentum in the sector this quarter as the sowing period is underway. Hopefully, the revival of activity in other sectors can pick up the slack.

Apart from agriculture, another notable sectoral growth figure has been the contraction of the public administration services in Q1 of 5.05 percent. This is even lower than the contraction witnessed in financial, real estate and professional services of 4.35 percent. The dip in public administration is surprising since it was one of the few operations that were relatively immune to the lockdown of the economy. Further exploration for the reasons behind this is not possible immediately as the disaggregated data is unavailable.

The bottom-line is that these numbers underscore the urgency of the government to reverse the trend at the earliest. However, this is easier said that done. The trend of slowdown in the economy has preceded the coronavirus pandemic. The growth numbers had been dipping each quarter over the six quarters preceding the last quarter of the previous financial year. The major challenge for revival has been the narrowing fiscal space for the government to enable spending on one hand, and the problem of overleveraged balance sheets for banks and corporates on the other. The limitation of the government on the fiscal front has made all efforts on the monetary side by the Reserve Bank of India ineffectual. The RBI has provided liquidity support via secondary markets and other regulatory measures to bring the yields down.

Yet the situation demands for real investments to revive demand and consumer spending, which can only be enabled with fiscal support. The options for the government demand a detailed and extensive discussion but there are several avenues in its kitty to expand its fiscal space. Rathin Roy, Managing Director of Overseas Development Institute (ODI), has argued for the use of the ways and means advances window that the RBI can use to provide extra liquidity. As a last resort, debt monetisation can be used too. The severity of the economic crisis facing the country go way beyond what can be conveyed in editorials. The biggest contraction in the Indian economy’s history lies ahead of it – an unimaginable scenario for developing countries. It is time to act like it.

The article was published with Economic Times on September 10, 2020.