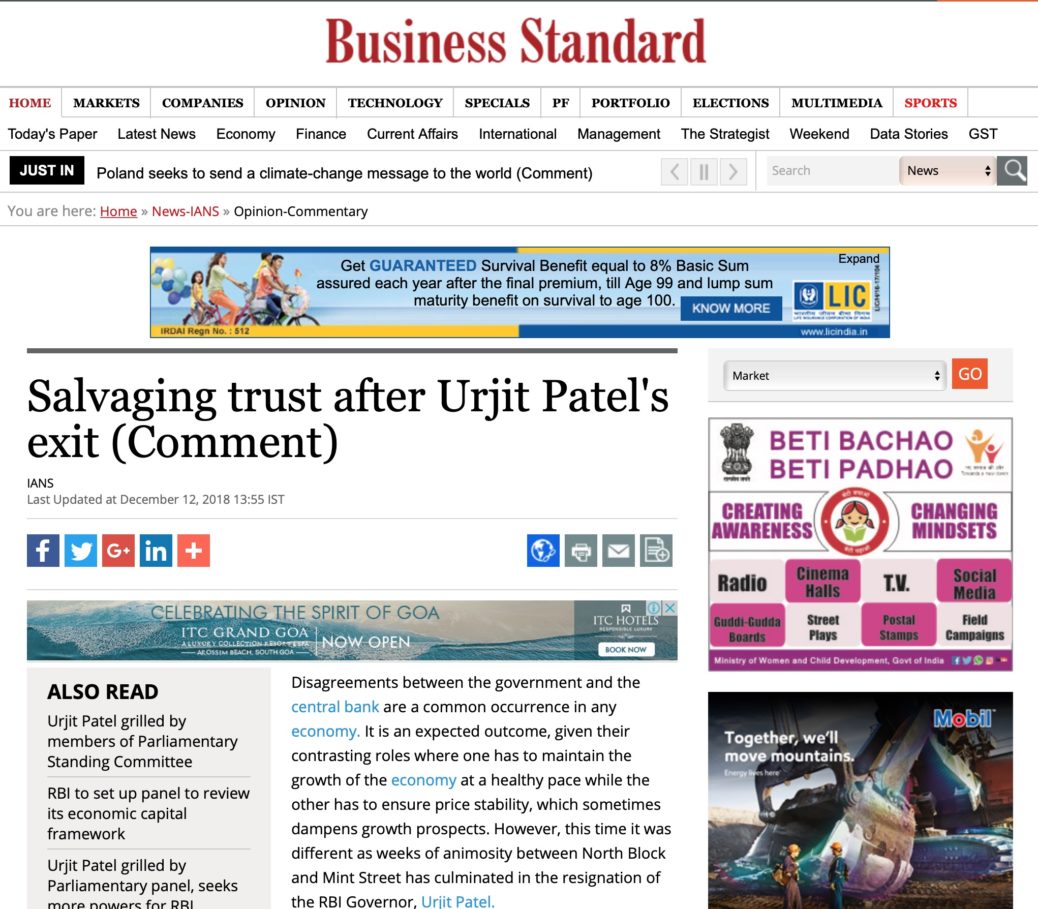 Disagreements between the government and the central bank are a common occurrence in any economy. It is an expected outcome given their contrasting roles where one has to maintain the growth of the economy at a healthy pace while the other has to ensure price stability, which sometimes dampens growth prospects. However, this time it was different. This time, the weeks of animosity between the North Block and Mint Street has culminated into the resignation of the RBI governor, Urjit Patel.

To underscore the gravity of the situation, it should be pointed out that it is only the second instance in the history of independent India that an RBI governor had to resign from his position. The previous case goes back to 1957 when the RBI Governor, Sir Benegal Rama Rau, resigned due to differences with the then finance minister, T.T. Krishnamachari (TTK). Rau had disliked the fact that TTK believed and publicly claimed that the RBI was a subordinate office of the finance ministry and treated it as such. He even openly hijacked the RBI’s monetary policy by announcing a stamp duty on bills. To Rau’s dismay, even Prime Minister Jawaharlal Nehru sided with his finance minister.

The case of Urjit Patel somewhat closely resembles with that of Rau in a sense that his disagreements with the government also seemingly arise from the intrusion of the latter into the RBI’s workings. Over the last few weeks it has become evident that there are at least three things that the government wants the RBI to do differently.

The first issue arose after the collapse of IL&FS, which sparked fears that banks might become wary of lending to non-banking financial companies (NBFCs) leading to a liquidity squeeze within the sector that might put India’s credit market at risk. Most significantly, the MSME sector was feared to take the worst hit, which would have brought the economy to a standstill. In order to avoid such an outcome, the government wanted the RBI to open a special liquidity window for the NBFC sector and avoid the risk of a credit freeze. In turn, the RBI was of the view that a liquidity window should be the measure of last resort. The situation was not as exigent in its view.

The second contentious issue between the government and RBI was the latter’s handling of the bad loan issue. In response to the NPA crisis, the RBI has put 12 banks – 11 public sector and one private sector bank – under its Prompt Corrective Action (PCA) framework under which these institutions face lending restrictions until their proportion of bad loans are substantially reduced. Since this regulation has dampened lending activity in the economy, the government has been pushing the RBI to ease its implementation, which the central bank has firmly resisted.

The third point of contention was the issue of reserves with the central bank. The government breached its full-year fiscal deficit target at the end of October, which was meant to be exhausted by the end of March 2019. Nevertheless, the government has still maintained its commitment to not breach the fiscal deficit target of 3.3 per cent this year. So, it is looking for avenues to gain additional revenues. RBI, which has way more than the required reserves at over 26 per cent of the total assets compared with a global mean of 16 per cent, seems like a viable source to tap into. But the RBI has maintained that it needs a strong balance sheet to function effectively.

The long-simmering tussle over these issues was even punctuated by finance ministry signalling the invocation of the never-used Section 7 of the RBI Act, which allows the government to give directions to the RBI that it may “consider necessary in the public interest.” As far as public knowledge goes, the Section has not yet been invoked. It is not yet clear what specifically led to Patel’s resignation, but a combination of these factors surely has had a role to play. The former RBI governor painted the move as “a statement of protest.”

When the BJP government had come into power, it had established a lot of goodwill by infusing independence in the functioning of the RBI. The establishment of the monetary policy committee that was tasked with inflation targeting was the perfect model that ensured the operational independence of the central bank to attain its objectives. The mechanism gave India a state-of-the-art monetary policy framework that was sorely missing in the economy. It was one of the most important economic reforms of the BJP government that is now at risk of being dismantled. Patel’s resignation, irrespective of the reasons that caused it, puts a significant dent on the public trust in the autonomy of the functioning of the central bank; something which this government itself has tried hard to build. Trust is a currency that holds the entire modern economic system together and significantly reduces transaction costs. It will be extremely costly for the economy in the long-run if that trust is weakened in any sense. So, the government should be wary of taking any actions that affect the public trust in the country’s institutions as short-terms gains of kickstarting lending activities or meeting the fiscal deficit targets cannot compensate for the repercussions that will emerge from the means adopted in achieving them. The way forward for the government should be to adopt a more collaborative approach with the RBI, instead of a combative one, to achieve the intended economic goals.

The article was published with Business Standard, Outlook India on December 12, 2018