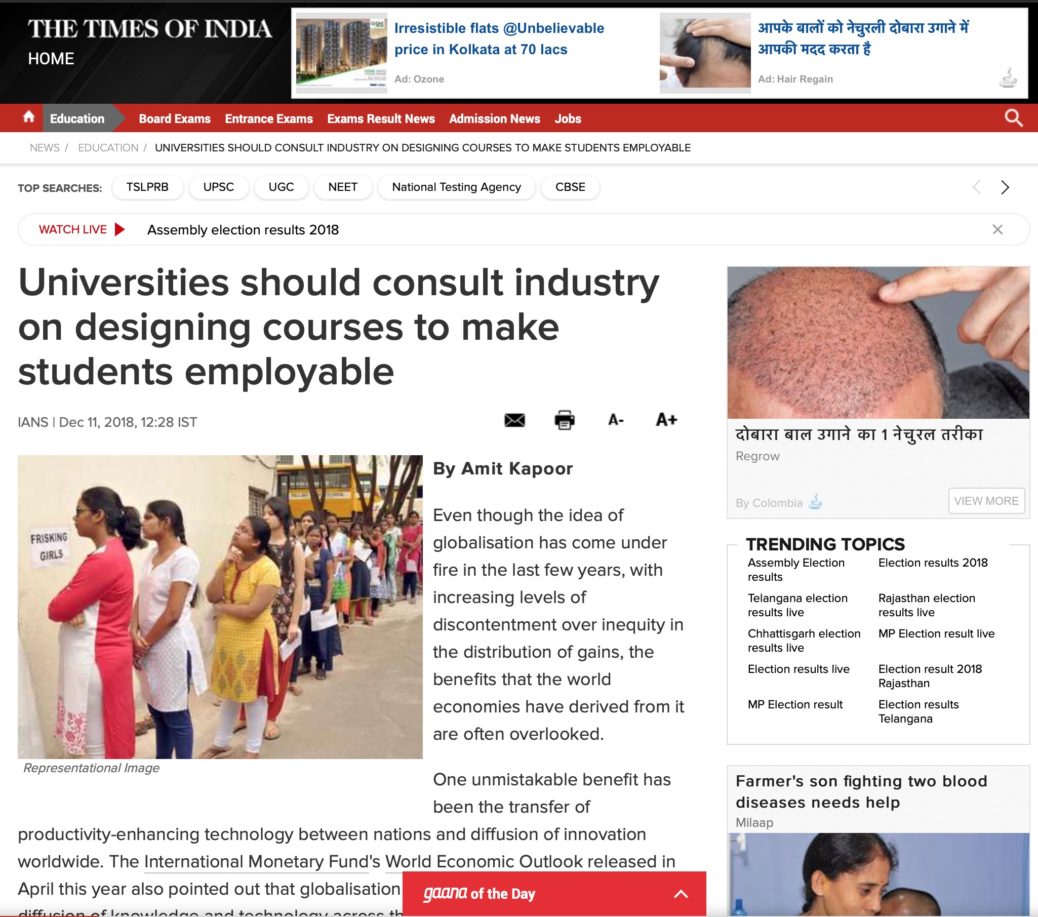 Even though the idea of globalisation has come under fire in the last few years, with increasing levels of discontentment over inequity in the distribution of gains, the benefits that the world economies have derived from it are often overlooked.

One unmistakable benefit has been the transfer of productivity-enhancing technology between nations and diffusion of innovation worldwide. The International Monetary Fund’s World Economic Outlook released in April this year also pointed out that globalisation has given a significant boost to the diffusion of knowledge and technology across the world through free trade, higher foreign direct investment and the international use of patents and copyrights.

Innovation has become the key to gaining greater market share and more and more countries are shifting their policy focus on building their innovative capacities to strengthen the competitiveness of their economies. Competitiveness is defined as “the ability of firms to compete, grow and be profitable in the long run”. Studies find an unequivocal link between innovative capacity and competitiveness of nations and regions. In fact, it is almost next to impossible for businesses to become competitive without innovating in its products and operations.

With the world innovating at breakneck speed, no country wants to be left in the lurch. Most significantly, China has laid out a plan to become an “innovative nation” by 2020 and an “international innovation leader” by 2030 in its current Five-Year Plan. Even countries like Saudi Arabia that have historically been heavily resource-dependent are making a conscious move towards higher innovation. These countries are beginning to recognise the fact that building a competitive advantage based on factor endowments (cheap labour in case of China and oil reserves for Saudi Arabia) cannot be sustained over the long run. A transition to a knowledge-based economy is imperative.

India can ill-afford to find itself lagging on the curve. The country had missed out on the first industrial revolution on account of being at the receiving end of colonial history. No other phase of innovation in history has transformed industry to such an extent. Only the digital revolution at the end of the 20th century came close. It is, therefore, a rare and opportune time for India to accelerate its development process and move into the next stage of growth by focusing on strategies to foster innovative capacity.

In recognition of the urgency to act, a roundtable on “Innovation for Prosperity” was organized by NITI Aayog and the Institute for Competitiveness last week to draw actionable policy recommendations for NITI Aayog to work upon to improve India’s innovation capacity. One of the most pertinent issues raised at the roundtable was the issue of industry-academia linkage in the Indian education system.

Around the world, universities are seen as hubs of innovation where experts from varied fields come together to share their ideas for developing new technologies, systems and processes. Such innovation originating from universities usually attracts huge demand from industry. This results in diversified products and market development, which leads to the nation gaining a competitive edge in the world markets.

Such industry-academia linkages are missing in the Indian economy. Universities are meant to play a dual role of knowledge creation and knowledge transfer. But the latter is found wanting in the Indian context. The problem resides in the abysmal quality of the country’s education system that focuses more on quantity than quality from a very early stage. For instance, the focus is always on the number of hours taught rather than the quality of education imparted in those hours.

At every level of education, students are never encouraged to think. Rote-learning is encouraged through an incessant focus on marks, which leaves no scope for thinking or innovation. Further, higher education is mostly outdated and hardly industry-oriented. Therefore, the human capital in India is barely equipped to innovate for industry. Another factor that hinders any industry-academia linkage is an utter lack of clarity on who owns the IP for collaborative innovation. Until these problems persist, any collaboration between industry and academia will be difficult to achieve.

One way to move away from the status quo is to encourage universities to consult industry while designing course curricula so that the graduates are more employable and innovative. The government can also play an enabling role in facilitating higher collaboration. It can provide tax incentives or subsidise setting up of research infrastructure in universities that can be used for industrial innovation. The government could also push for higher academic exchanges by funding the transaction costs involved in the process, which can particularly help in better understanding of what industry requires from academia.

The article was published with Times of India, Outlook India, Business Standard and Economic Times on December 11, 2018