Creating Prosperity Is The Key 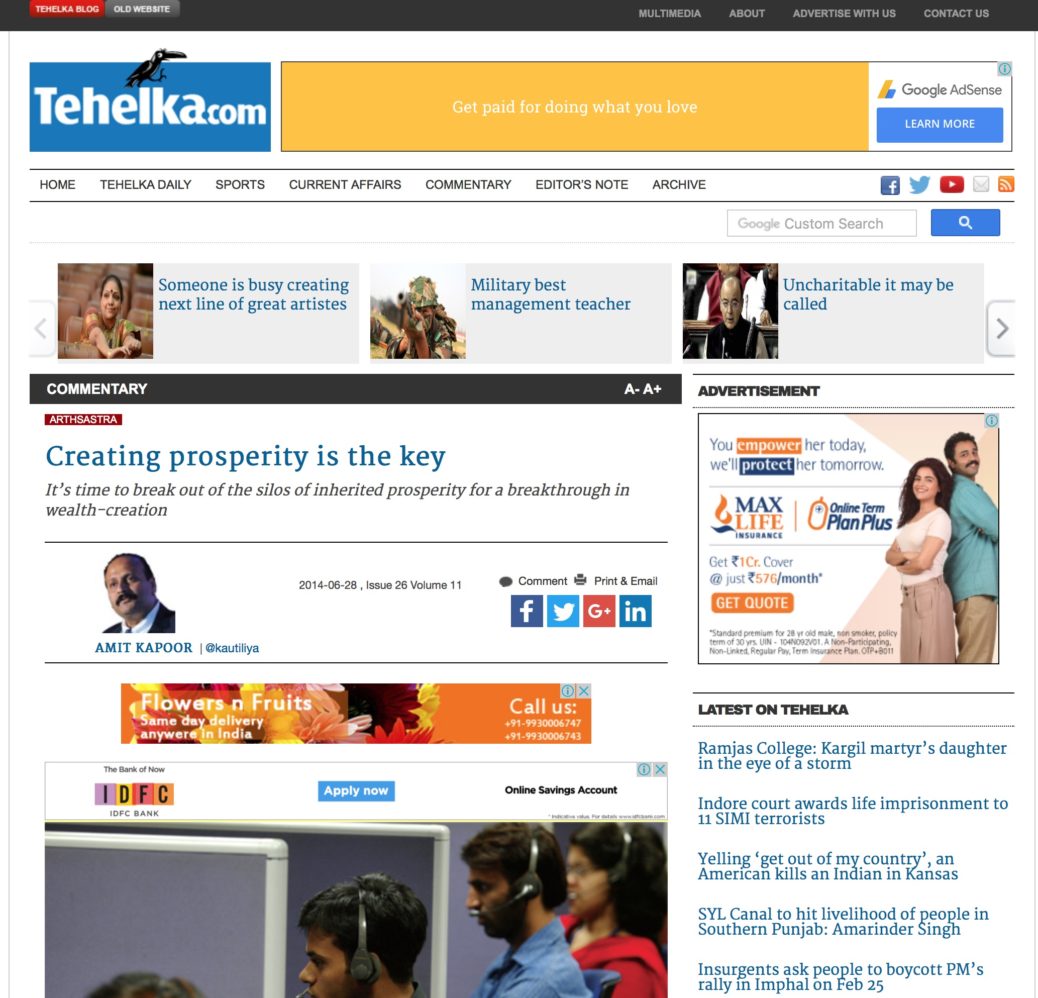 Competitiveness can be defined as the productivity of a country’s resources, especially land (natural resources), labour (human beings) and capital. Besides efficiency and yield, productivity is also about how much of the resources that a nation or a region is endowed with goes through the production process in a given period of time. The productivity of a nation’s resources determines its standard of living, which gets reflected in the per capita income of the population.

Digging deeper, we would appreciate that the productivity of a nation is dependent on two distinct though interrelated aspects: the value extracted from products and services offered within the country, and the efficiency with which the products and services are produced. The intellectual underpinning of this understanding is that a country’s prosperity is driven by the ability of its companies to extract value.

Clearly, productivity is defined not by which industries a country competes in, but by how the companies choose to compete within each industry. It’s easy to see that a nation’s productivity is a reflection of the choices made by its companies regarding which sector of the industry to operate in, the value-addition they do, the efficiency with which they produce, how effectively they extract value and so on.

To understand this better, we can compare the Information Technology (IT) industry in India with that of Israel. A software engineer in Israel is typically 10 times more productive than his counterpart in India. Why is this so? It is actually a reflection of the difference in what the engineers in the two countries are expected to do. In Israel, where the value-addition done by the industry is immense, the engineers focus on building products that help in extracting better value. On the other hand, most engineers in the Indian it industry are engaged in support functions that give them limited scope for value-addition, and the work itself is quite likely relegated to the level of the mundane. This is not because of the quality of our engineers and what they are capable of doing, but is rather a consequence of what our companies are choosing to do.

In India, where the wages are low, the companies are evidently focussed on the maximum exploitation of cheap labour. So they feel no need to break out of the entrenched models of operation that are dependent on fixed practices rather than pathbreaking innovations. This analysis may sound derogatory, but no one can deny that the majority of players in the industry operate within a restricted framework where availability of cheap labour is the key. Though India takes pride in branding itself as the it hub of the world, there are very few really innovative IT companies in the country.

In other words, we seem to be celebrating an industry that does extremely limited value-addition and does not adequately harness the intellectual capabilities of its huge population of young people. What India needs to do instead is to find winners in industries where value-addition is high and gets reflected in higher labour productivity.

Those who do not agree with this assessment and insist that the Indian IT industry does provide for high productivity, need to look at the bigger picture. Compared to how things stack up across the globe, we are probably quite low on the productivity front. This reality is also reflected in the low salaries that IT engineers are paid in the country. Instead of comparing the salaries and wages in the IT industry with what is paid in other industries in the country, it would be more relevant to do a global comparison within the same industry. For instance, the salary of an average Indian engineer is quite likely to be just one-twelfth of what an engineer in the same industry would get paid in the US.

What we find in the IT industry is a reflection of the state of the economy in India, which can be seen across different industries. We are stuck in a development paradigm that operates at the lower end of the food chain within every industry. There is limited value-addition and very high level of leakages within the system. Over the past decade, the model of economic growth in India has been dependent on selling or exploiting our inherited natural resources. This has also resulted in the focus veering towards the distribution of wealth rather than its creation — a typical syndrome that hits countries driven by such an economic model.

As our development model is based on inherited prosperity, we find that the government ends up playing the role of the owner and distributor of wealth. Moreover, it continues with policies and practices that can be termed unproductive, and supports subsidies that are themselves distorted and subvert the very structure of industry.

What India needs to do today is to move beyond the model of inherited prosperity and head towards the dominion of what we would call ‘created prosperity’. Created prosperity is about creating products and services that are valuable; in other words, where the value-addition is superior and the companies are able to extract better returns for the services they render or the products they produce. There would be no limits to a nation’s prosperity if it were grounded in the innovativeness of its enterprises.

The critical distinction between inherited prosperity and created prosperity is in the way companies approach the idea of competition and resource exploitation. A model of inherited prosperity inevitably makes enterprises move towards a competitive paradigm in which innovation is not the key for success and continued existence. They become complacent at times and stop seeking out ways to provide better solutions. As a result, they get trapped in a self-defeating situation as another economy would emerge over a period of time that could provide a similar solution at a lower cost. This explains why there has been a huge shift in it enterprises from India to other countries in the neighbourhood, which provide cheaper labour and resources. Moreover, companies such as Microsoft, Apple, Google and Facebook all emerged outside India, and that too in countries that cannot boast of indigenous talent that is readily or freely available.

Inherited prosperity can be useful, but it also leads to stagnation. The only way out is for the companies to be shaken up so that they break out of their silos and start looking at things from a fresh perspective.

The role of the government is also determined by whether the development model is based on inherited or created prosperity. The inherited prosperity model requires the government to play a central role in the economy and act as the redistributor of wealth. On the other hand, if economic growth were based on created wealth, the government would be seen as a facilitator that creates and maintains the conditions that enable the companies to innovate. This would foster the development of the private sector as the creator of national wealth.

To ensure that the Indian economy continues to grow, the biggest challenge before the government today is to create conditions for productivity and innovation. It has to push the companies and the people out of their slumber so that they challenge the status quo, the entrenched models within which economic activities currently take place.

A starting point would be in formulating stable economic policies that create the conditions for enterprises to flourish and create wealth. This does not mean putting the agenda of equitable growth and social development on the backburner. On the contrary, idea of created prosperity implies that the social agenda must be an integral part of the country’s economic agenda.

Unless there is a significant improvement in our social conditions, we cannot have a productive economy. We would, instead, be faced with the prospect of social revolt that would jeopardise the creation of wealth. Instead of being in the business of creating wealth, the government’s job is to ensure that things don’t come to such a pass. If only it creates the conditions for unleashing the capacity for innovation in the country, the companies would emerge as exemplary creators of national wealth.