Why States Must Be Visionary 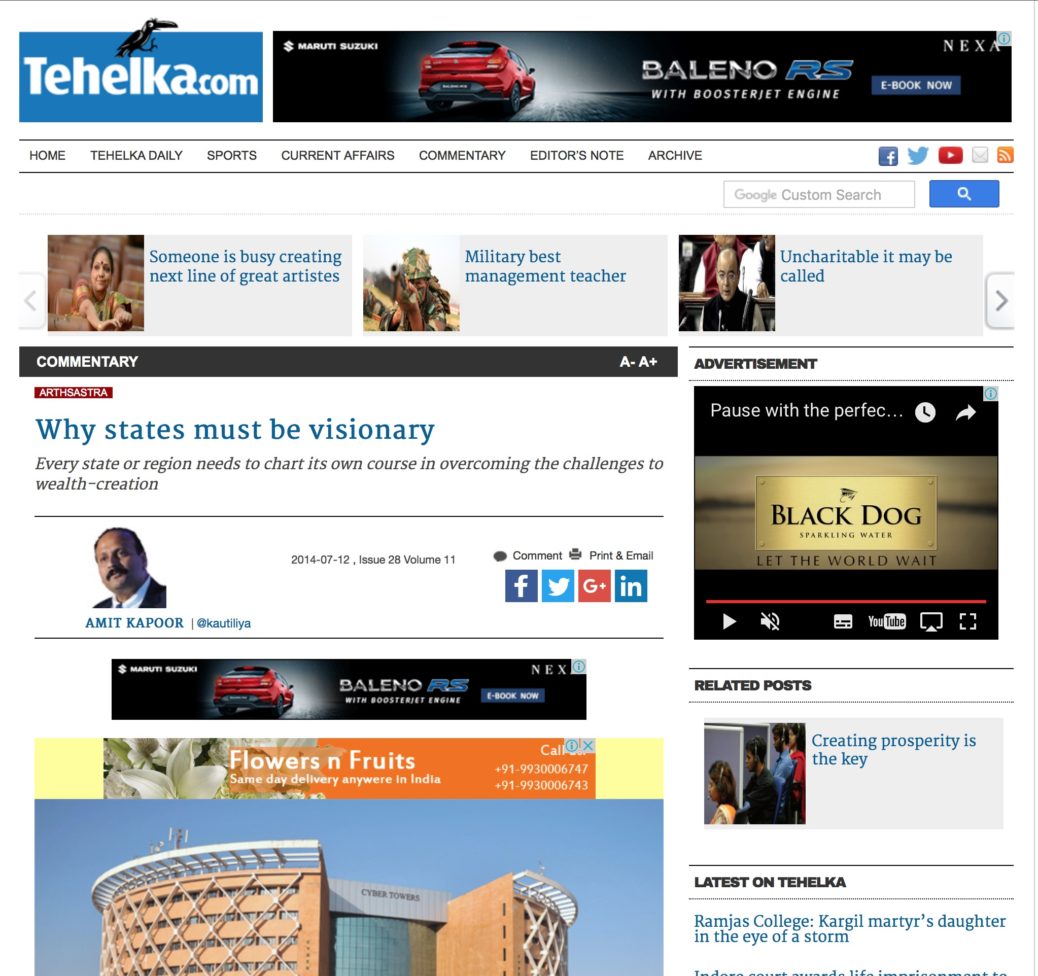 Remarkable variations are seen in the performance of nations in achieving prosperity across the world, and this makes us think of the disparities that exist between them. This is true not only for nations, but also for regions within a nation — i.e., states or provinces. Statistics related to the economic performance of states in India show significant differences in prosperity (GDP per capita at current prices) and growth (growth of GDP per capita between 2004 and 2012). Goa performs quite differently from Bihar, Madhya Pradesh, UP, Gujarat etc.

The performance of a nation is dependent on the performance of all its states. The performance of each state, in turn, is determined by how its districts, cities and villages perform. That is why it is crucial for policymakers and corporates to decipher the reasons behind the different trajectories of growth and performance of the states and their smaller geographical units. For that, one must first understand the determinants of productivity and growth in productivity.

The following three elements define the conditions for improvement in productivity and innovation within a region:

If India needs to emerge as a competitive economy, then it has to work collectively as a nation. However, at the same time, each state and region needs to develop its own contours of development. This would only happen if the states have the willingness and power to develop their own vision, take actions and be partners in India’s development. The change would only start if we appreciate that the reality of each state or even the smaller geographical units offer unique challenges that need unique solutions to address them. Each situation warrants a different mechanism to overcome the challenges. Clearly, we cannot have one single way of managing all the states.

The idea doesn’t end here. It is rather just the beginning of the competitive spirit between the regions and states. The states look at competing in terms of offering the best environment for business and create the appropriate conditions to attract investment.

If geography and natural endowments were the only things that matter in economic performance, then Gujarat and Bihar could have had different trajectories of growth than they have actually achieved. The truth is that a clear vision and strategy are much more important to build on.

It is foolhardy to expect any region to suddenly emerge as an economic powerhouse. Regions evolve over time in a gradual process that takes time to bear fruit. For instance, the steps taken to create education hubs in south India started yielding results only two decades later with the emergence of knowledge centres in Karnataka, Tamil Nadu and Andhra Pradesh.

If a state wants to bring in change, it has to immediately start taking the first steps, but it should remember that the change would take years to materialise and produce results. The process can take long even though it is not driven by inherited factors, which are important but do not determine the evolution of the regional economy.

Evolution is dependent on the ecosystem of entrepreneurship in the region, the presence of specialised assets (such as research and training institutes that drive innovation and collaboration), state-level policy (public policy, political choices and prioritisations) and, of course, the past trajectory.

Often, the evolution process proceeds with its own momentum once the trajectory is set. We should not forget, however, that the process is strongly affected by leadership and the choices made by the government and policymakers. That is the lesson to be drawn from the different trajectories of growth among regions within the country and the multiple outcomes across the states.

The states need to overcome inertia and focus on building economic activity and resilience at the level of villages and cities. Here, it will be germane to invoke Mahatma Gandhi, who said that every village should be self-sufficient. What he meant was that each geographical unit should have its own development agenda, vision and collective actions towards achieving the vision.

As we move towards developing more comprehensive agendas for the development of regions, this is what we have to learn from the reasons why some states perform better than others:

We should not forget and ignore the fact that India’s development in the future is clearly dependent on the collective performance of the states. The Centre can set the broad contours of policy, but making India a far more prosperous country would depend on how the states define their vision and take steps towards realising it.