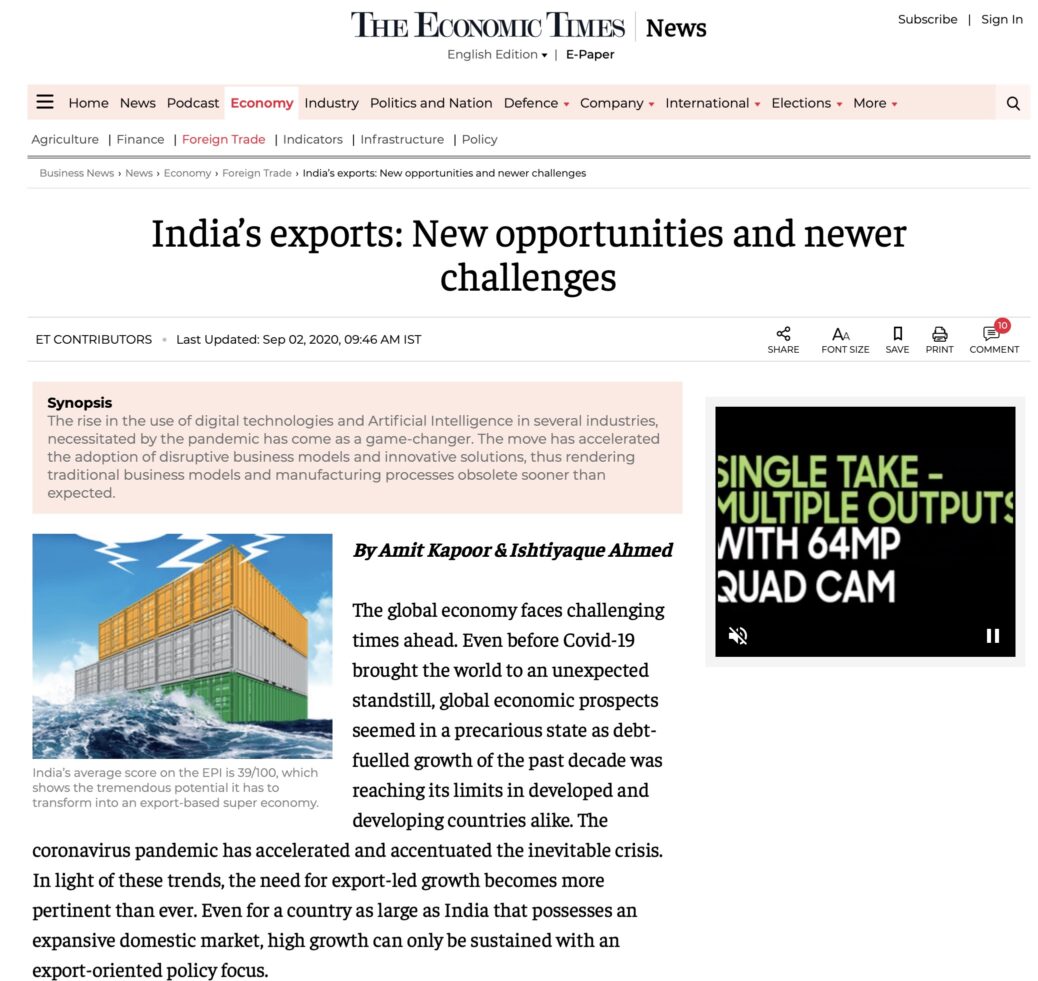 The global economy faces challenging times ahead. Even before COVID-19 brought the world to an unexpected standstill, global economic prospects seemed in a precarious state as debt-fuelled growth of the past decade was reaching its limits in developed and developing countries alike. The coronavirus pandemic has accelerated and accentuated the inevitable crisis. In light of these trends, the need for export-led growth becomes more pertinent than ever. Even for a country as large as India that possesses an expansive domestic market, high growth can only be sustained with an export-oriented policy focus.

The government has made huge strides in facilitating an enabling business ecosystem through liberalization of Foreign Direct Investment, ratifying WTO’s Trade Facilitation Agreement, and other such reforms since 2014, which has improved India’s integration into the global economy. To further enhance India’s export preparedness to meet the needs of the post-COVID global economy, the Export Preparedness Index (EPI) 2020 examines the export ecosystem of Indian states and union territories.

The study recognizes the important role of states in enhancing India’s share in the global economy. To elaborate, a better domestic capability would enable India to compete with other emerging economies to become a viable supplier in the global market, which requires shifting the focus to the states. The EPI 2020 therefore aims to understand export preparedness at the regional level. It recognizes that policy measures at the national level are not enough to strengthen exports and that efforts should begin with improving competition in the domestic market.

Further, improving the export competitiveness of states can also mitigate regional disparities through export-led growth and the consequent rise in standard of living. It is corroborated by the Economic Survey 2017-18, that shows that 70 per cent of India’s export has been dominated by five states –Maharashtra, Gujarat, Karnataka, Tamil Nadu and Telangana. The Economic Surveyestablished that states which engage with the world markets as well as with the other states within the country are richer.

Thus, the EPI 2020 sets out to assess the readiness of the states in terms of their export potential across four pillars, eleven sub-pillars, and fifty-five indicators. The four broad pillars are Policy, Business Ecosystem, Export Ecosystem and Export Performance. The central idea is to recognize the unique strengths and competitive advantages of each state, and to mould policies and practices accordingly. Further, a state may perform exceptionally well in one pillar and poorly in the other, which makes blanket initiatives insufficient in addressing the diverse issue. Efforts should be made at the grassroots as well to drive an export-led growth.

India’s average score on the EPI is 39 out of 100, which shows the tremendous potential India holds towards transforming into an export-based super economy. In the state-wise assessment, Policy and Business Ecosystem are the highest-scoring pillars, with the Export Ecosystem being the least-scoring pillar. This implies India has a conducive business environment and favourable policies in place but they are not translating into a strong export ecosystem.

Some of the drawbacks obstructing export preparedness in many states are poor trade support, gaps in export infrastructure, basic trade support, lack of access to financial facility and low export credit. Delving further into the state-wise analysis shows that no state has been able to score well on every pillar, barring exceptions like Gujarat and Maharashtra whose scores do not show much disparity across pillars. In this way, many states’ export potential and competitive advantages remain untapped.

There is a lot of room for improvement R&D infrastructure across the country. The index shows that this is one of the biggest challenges faced by the country as the regional disparities in terms of R&D infrastructure are high. In the context of the evolving nature of globalization that is likely to reward high-quality products and innovation more than ever before, India’s cost competitiveness may not be sufficient to establish itself in the global economy, and gradual improvement in R&D would be greatly rewarding in the long run.

The rise in the use of digital technologies and Artificial Intelligence (AI) in several industries, necessitated by the pandemic has come as a game-changer. The move has accelerated the adoption of disruptive business models and innovative solutions, thus rendering traditional business models and manufacturing processes obsolete sooner than expected. Therefore, in the post-COVID world, India needs to create its own niche in the global market. Thus, it is essential to tap into the capabilities of Indian states by plugging in the gaps in policy and infrastructure. At the same time, it is also necessary that the more developed states expand their focus towards improving R&D infrastructure, with the view to create that niche. It is because R&D plays a significant role in improving the quality of products to match up to the international standards, and enables greater innovation.

As India begins on its journey of self-reliance and export expansion in these tumultuous times, the states need to take on the reins and adapt their efforts with the emerging trends in globalization. The EPI 2020 can serve as a guide to the sub-national governments in creating an enabling framework and removing the bottlenecks that afflict their respective export sectors.

The article was published with Economic Times on September 2, 2020.