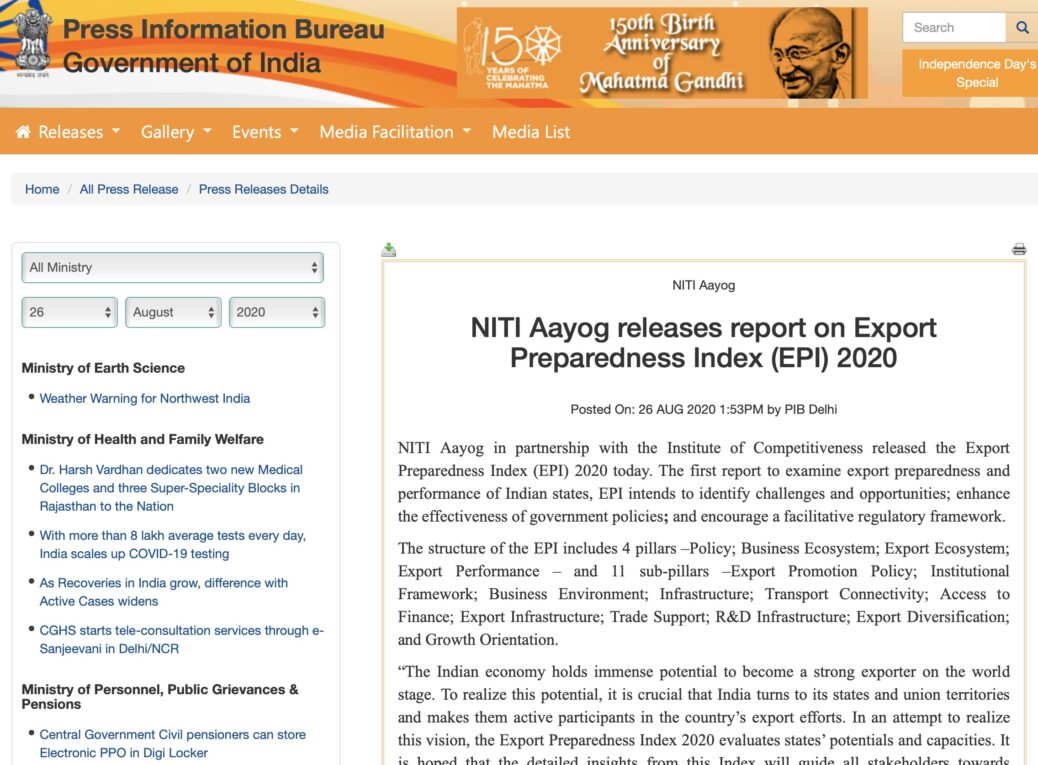 NITI Aayog in partnership with the Institute of Competitiveness released the Export Preparedness Index (EPI) 2020 today. The first report to examine export preparedness and performance of Indian states, EPI intends to identify challenges and opportunities; enhance the effectiveness of government policies; and encourage a facilitative regulatory framework.

“The Indian economy holds immense potential to become a strong exporter on the world stage. To realize this potential, it is crucial that India turns to its states and union territories and makes them active participants in the country’s export efforts. In an attempt to realize this vision, the Export Preparedness Index 2020 evaluates states’ potentials and capacities. It is hoped that the detailed insights from this Index will guide all stakeholders towards strengthening the export ecosystem at both the national and sub-national levels,” said NITI Aayog Vice Chairman Dr Rajiv Kumar.

Amitabh Kant, Chief Executive Officer, NITI Aayog, said, “The Export Preparedness Index is a data-driven effort to identify the core areas crucial for export promotion at the sub-national level. All the states and union territories have been assessed on crucial parameters that are critical for any typical economic unit to achieve sustainable export growth. The Index would be a helpful guide for the state governments to benchmark regional performance with respect to export promotion and thus deliver key policy insights on how to improve and enhance the same.”

What this edition of the EPI has shown is that most Indian states performed well on average across the sub-pillars of Exports Diversification, Transport Connectivity, and Infrastructure. The average score of Indian states in these three sub-pillars was above 50%. Also, given the low standard deviation in Export Diversification and Transport Connectivity, the averages are not skewed to the higher side by a few over-achievers. However, Indian states should also focus on other key components in order to improve export competitiveness.

Overall, most of the Coastal States are the best performers. Gujarat, Maharashtra and Tamil Nadu occupy the top three ranks, respectively. Six of eight coastal states feature in the top ten rankings, indicating the presence of strong enabling and facilitating factors to promote exports. In the landlocked states, Rajasthan has performed the best, followed by Telangana and Haryana. Among the Himalayan states, Uttarakhand is the highest, followed by Tripura and Himachal Pradesh. Across the Union Territories, Delhi has performed the best, followed by Goa and Chandigarh.

The report also highlights that export orientation and preparedness are not just restricted to prosperous states. Even emerging states can undertake dynamic export policy measures, have functioning promotional councils, and synchronize with national logistical plans to grow their exports. Chhattisgarh and Jharkhand are two landlocked states that had initiated several measures to promote exports. Other states facing similar socio-economic challenges can look at the measures taken by Chhattisgarh and Jharkhand and try to implement them to grow their exports.

Many northeastern states under the Growth Orientation sub-pillar were able to export more by focusing on their indigenous product baskets. This shows that a focused development of such baskets (like spices) can drive exports on one hand and also improve farmer incomes on the other in these states.

Based on the findings of the report, export promotion in India faces three fundamental challenges: intra- and inter-regional disparities in export infrastructure; poor trade support and growth orientation among states; and poor R&D infrastructure to promote complex and unique exports.

There is a need to emphasize on key strategies to address these challenges: a joint development of export infrastructure; strengthening industry-academia linkages; and creating state-level engagements for economic diplomacy. These strategies could be supported by revamped designs and standards for local products and by harnessing the innovating tendencies to provide new use cases for such products, with adequate support from the Centre.

To achieve the target of making India a developed economy by focusing on ‘Atmanirbhar Bharat’, there is a need to increase exports from all the states and union territories. The EPI provides invaluable insights on how states can attain this goal.

The final framework of the EPI was based on essential feedback from states, UTs and organizations like EXIM Bank, IIFT and DGCIS. The data has been primarily provided by state governments. For some of the indicators, RBI, DGCIS and Central ministries were consulted.

The 4 pillars and the rationale behind selection of each of them are given below:

The Press Release was done at Press Information Bureau on August 26, 2020.