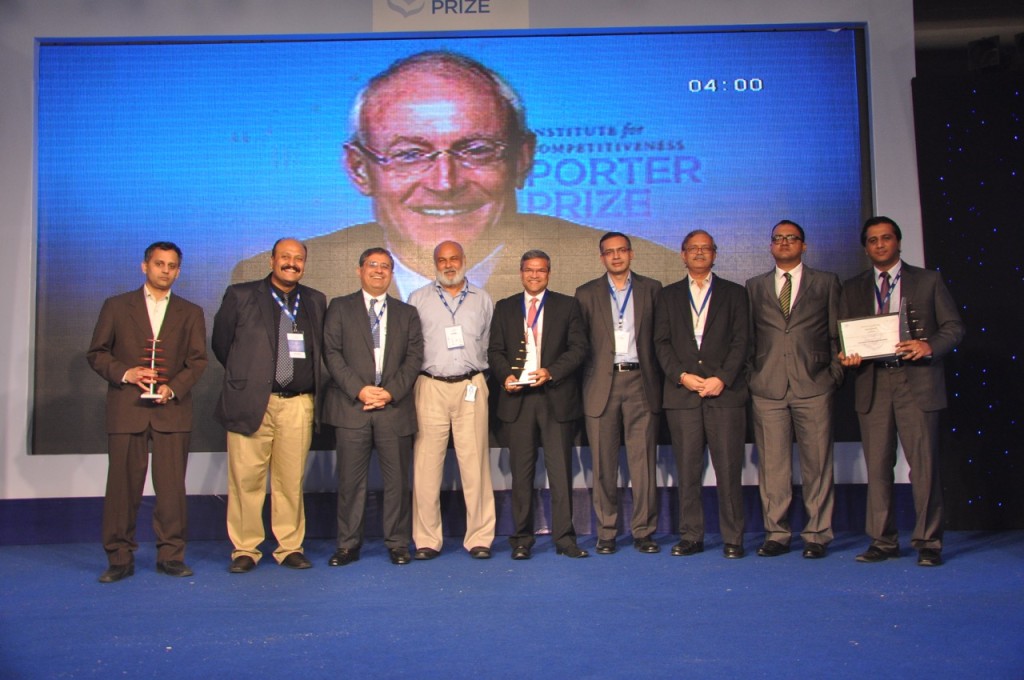 Porter Prize named after the renowned philosopher, thinker, Harvard faculty member and Father of the modern strategic field Professor Michael E. Porter was successfully held at The Leela Kempinski, Gurgaon on September 28, 2012. Dr. Amit Kapoor, Honorary Chairman, Institute for Competitiveness welcomed the Strategy Guru Michael E. Porter. Professor Porter addressed the Indian corporates and threw some light on the Indian Industry and its competitiveness. Awards were bestowed to the seven Indian companies, which emerged as the Porter Prize winners under the six categories. The companies that made it to the winner list are

Professor Porter delivered profoundly enlightening task on various connotations of strategy and its formulation. He built very logical and coherent thesis illuminating what strategy is and what strategy is not. Interestingly, he demonstrated by making choices every organization can come forth with unique value proposition and thus have a positive sum competition rather than zero sum. He illustrated through a lot of practical examples that being strategic entailed an ability to say no. He exhorted corporate to go beyond the traditional corporate social responsibility and really make impact untackling societal problems by building shared value business models which pay for themselves and are scalable. It was touching to hear him say that he is a friend of India and so genuinely feels concerned on slow business changes and on rising costs of business.

At the end of talk there was an interactive Question & Answer round – in fact nostalgic because a number of audience members happened to have been students, Professor Porter himself; Dr Porter readily recognized them. When queried that did he feel his five forces analysis propounded almost 3 decades back needed major revisiting, he squarely and convincingly stood by his model. On the issue of outsourcing he shared extensive analysis and action oriented initiatives at Harvard under the umbrella of US Competitiveness. He touchingly pointed that business is at times unfairly accused wherein touchingly pointed organizations actually gain through sensible outsourcing.

At the event, Sandip Das, CEO, Director Aircel & CEO Maxis Communications Berhad commenting on the process of Porter Prize said, “Rigorous cross dimensional analysis was done – it was figured out what capabilities are there and what need to be built. Thereafter we focused on having a product a week“.

Dr. Amit Kapoor, Honorary Chairman, Institute for Competitiveness, India expressed heartfelt thanks to Professor Porter for having the first Porter Prize award in India. Looking at the phenomenal contribution of Professor Porter in the field of strategy and competitiveness it was natural to call him the god of strategy. Dr Kapoor also thanks the entire Institute for Competitiveness family in having made the event successful through teamwork.