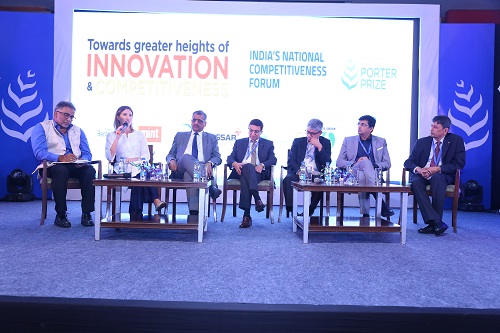 Arvind shared his thoughts on the Global financial crisis in 2009 and how it impacted the world. He set the tone for the day by putting across key thoughts around main elements of global financial crisis in 2009. He discussed the performance of export-led economies like China vis-à-vis neutral / balanced economies like India. India was more domestically oriented with exports being small as a percentage of GDP when compared with other nations. He further shared his thoughts on the emergence of dual economy trends in India.  Finally, two key points were stated, “First, we tend to go wrong, because we are not willing to look at new things. The change is continuous and when things are in turmoil, be open to new ideas. Second, we focus too much on the main breakthroughs. Technological capability of the economy depends on per capita. So, we need to focus on incremental changes to have continuous GDP growth.”

Wilfried introduced the idea and theme of the book “Riding the Tiger” co-authored by him and Amit.” He shared his perspective on the diverse strategies of successful companies operating in the volatile, uncertain, complex and ambiguous business environment in India. He said, “It is not only that India is doing well. We have a large number of companies in India, which are doing exceptionally well.” He further said that India is a complex economy having multiple levels of competition across price and quality levels. Based on the extensive study of successful companies in India, he discussed about the following levers as essentials for surviving in India and globally – operational excellence, innovation, trade-offs, alignment, leadership & courage, and serendipity.

The forum kick-started with the first session on “Innovation, Intellectual Property, and Value Creation in association with IIM Indore.” The discussion focused on the challenges faced by the organizations in developing new products and technologies and the role of innovation in creating business value and competitive advantage. The following key points emerged during the discussion. First, the harbinger of India’s innovation is start-ups, which are leveraging technology to tackle the operational and customer challenges. Second, technology excellence is a key to competitive advantage. Third, people and environment play a significant role in growth. Who you hire is not important but how you hire makes a difference. Besides that, providing autonomy and transparency is important in a start-up culture. Fourth, one needs to identify a customer category which is truly underserved. Once the above is accomplished, it is important to address the same in a smart and user-friendly manner using technology.  Fifth, the success of innovation depends on how well the company understands its consumers or target segment.

This was followed by a keynote given by Ravi Venkatesan (Chairman, Bank of Baroda). He shared his thoughts on the fourth wave of industrialization and where India stands on the same. He started with the India’s competitive ranking in the latest WEF report.  As per the latest WEF report, India has gained more than 15 positions to be ranked at 39th position regarding competitiveness.  He compared the innovation and competitive position of India and China during the 1800s and 1900s. How India and China used to be the major countries regarding innovation during the 1800s. However, during the 1900s, India and China started lagging as compared to other countries regarding innovation and competitiveness.  He stated that the key factor for this situation was missing out the first industrial revolution – steam engine and power loom. The impact was tremendous. The handloom industry of India got impacted. Countries like the UK and other European countries went from rags to riches after first industrial revolution whereas countries like China and India went from riches to rags. He raised the question on how fourth industrial revolution driven by science-based innovations (genomics, AI, etc.) will impact India? Singularity is the future when machines and software will become as smart as or smarter than people in the near future.  The new technology will make people oriented jobs obsolete and will get replaced by robots by 2025. Two interesting statistics were shared. Last year, China deployed more robots than people. This year, Indian IT industry has reached the peak. This requires a reboot for people to get skilled in science-based skills. He stressed upon the technology and entrepreneurial ecosystem in place to create companies like Google and Apple. Finally, he stated, “India needs to enable an ecosystem for creating new age companies as smart as Google or Apple. This requires an intentional and purposive approach and mindset among government, leaders, academia and people.”

It was then followed by a panel discussion on “Role of Innovation in State Competitiveness, Competitive Advantage of Firms, and Rise of New Industries.” The discussion focused on three key aspects of innovation – state level innovation, sectoral innovation and firms, and innovation policies at the state and union levels. The discussion started with the role of institutional ecosystem and new initiatives by the government like Swachh Bharat, financial inclusion, Make In India, etc. in enhancing the focus on innovation among the corporates. The following key points emerged during the discussion. First, mindset is the first step towards innovation. Hon’ble PM is doing a great job in championing the right mindset towards self-improvement of the people and economic growth of the country. Second, changes are happening at both country level as well as corporates level. However, what remains to be seen is that how focus on innovation will maintain the momentum in time ahead. Third, Innovation should be in the DNA of the companies to create better and long-term value. As an innovative entrepreneur, one should not be bogged down by policy level or other constraining issues. Fourth, self-belief and patience are important to bring innovation to reality. The ecosystem changes with macro-environmental trends and which is not something, which should restrict the innovative entrepreneurs from going ahead.

The next session was a talk on “Unconscious Leadership” by Santhosh Babu (Managing Director, Organization Development Alternatives Consultants). Santhosh demonstrated the tremendous power of unconscious mind in achieving the seemingly difficult objectives. He said, “All the key functions of the human body like breathing, sensing etc. are performed by the unconscious brain.” He discussed three modes of decision making using the neocortex (logical), reptilian (instinctive), or mammalian (emotional) brain. He suggested three techniques for logical thinking – Consciously using pleasure and pain, Thinking before action, and Thinking of a reason.

This was followed by a panel discussion on “Social Progress and Shared Value.” The discussion focused on India’s low performance on social progress despite having a consistent GDP growth.  India has been ranked at 98th position among 133 countries on Social Progress Index 2016. The following reasons emerged during the discussion. First, GDP and social progress are mainly looked upon as two parallel streams with main focus on GDP growth. However, the majority of the population living in semi-urban and rural areas lacks access to basic necessities. The lack of basic necessities and inequalities is mainly responsible for low social progress.  Secondly, we lack focused data and action based approach. What is needed is to generate focused data regarding the country’s performance on MDGs across cities and states and leverage the same in terms of actions.

Third, there are two key challenges at the base of the pyramid (BoP) – access and livelihood. We need to create systems and processes to manage the access challengeas we are mainly focused on livelihood challenge.  Fourth, information and communication technologies play the key role as enablers in bridging the accessibility and affordability challenges at the BoP. Focus is required on leveraging the high touch technologies to design and deliver affordable and high quality products for the basic needs of the BoP segment.

The above panel discussion was followed by another interesting session on “Visual Thinking” by Maarten Koomans (CEO, ReframingHealthcare.com). Maarten talked about the role of visual thinking in making better and effective decisions. He said, “Visual thinking is an effective approach to bringing out the unique solutions for the complex problems.” He talked about three main elements of visual thinking. First, one needs to look at the problem by changing the perspective or mindset. Second, think about the activation of strategy by story-telling and collaborative approach. The people in the organization should know about the strategy of the company. Third, adopt a culture, which promotes visual thinking by story-telling, visual layouts, etc.

Then came the final panel discussion on “Strategy, Business Models, Trade-offs, Positioning and Fit.”  This discussion mainly focused upon strategic choices and actions across industries. The following key points emerged from the discussion. The first point is to identify the underserved need of the target segment and design the appropriate product and/or service offerings for that specific need.  The second point is to have a clarity on trade-offs. For example, Abbott in India has taken a conscious decision to target the Tier-I cities in India where lies the majority of the healthcare resources and infrastructure.  Third, understanding the consumer socio-behavioural patterns while designing the value offerings. For example, people do want to move from refined oil to health oil. However, they are not willing to let go the taste while making a move. They want the healthy oil to provide the same taste and cooking experience besides being healthy. Fourth is the technology shift happening globally which is increasing the risk of obsoletion for the companies.  However, technology does not substitute the strength of content or value being delivered to the customers.

Finally, Mr. Rana Kapoor, (MD & CEO, YES BANK and Chairman, YES Institute) delivered a keynote on innovation and entrepreneurship. He stated, “India’s new age Entrepreneurial Economy is characterized by Design, Innovation and Creativity – led Entrepreneurship. I am confident that with the right mix of innovative ideas, access to risk capital and large consumption demand, India is well positioned to emerge as the global hub for entrepreneurship & innovation with the potential to fuel not only national, but also global aspirations of the 21st century.

He stressed on funding models, building and sponsoring incubators, adopting a value-driven approach, and focusing on expansion as the key points for successful businesses.

Amit Kapoor (Honorary Chairman, Institute for Competitiveness) also mentioned about the learnings and insights gained from the successful Indian enterprises during the interactions as a part of Porter Prize.  He mentioned on how the companies assess the dynamic competitive landscape in India and design the appropriate strategies and business models which is something which need be understood and practiced.